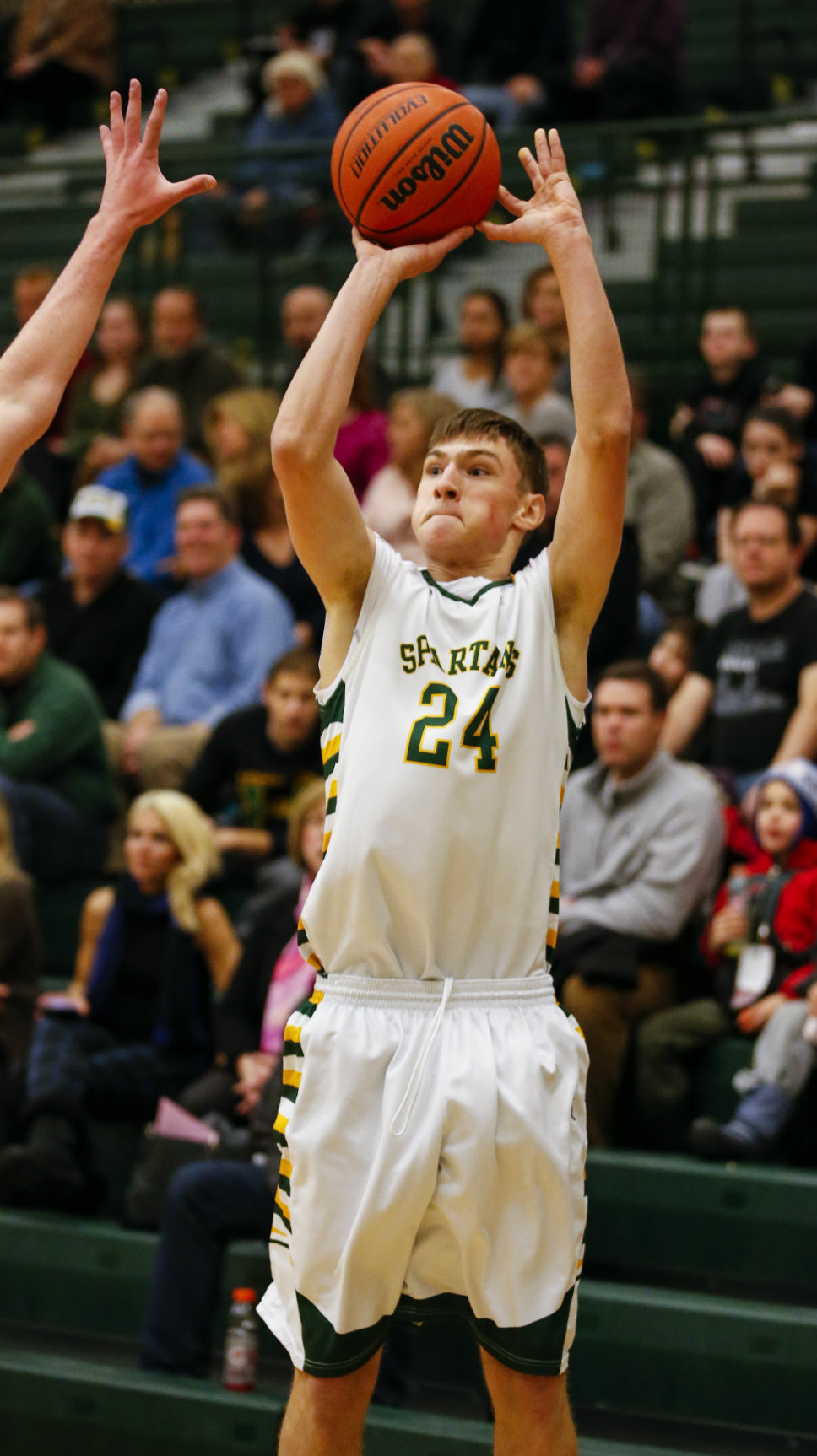 Pat Hamilton brought this on himself.

There he was, just a few feet away from the Deerfield High School bench, dribbling to the right corner, shrugging off a defender and then unloading a high-arcing, slightly off-balanced, step-back, fade-away 18-foot jumper.

A shot like that is what makes this game scream-your-lungs-out fun for the easygoing but highly competitive Hamilton.

“I’m pretty confident shooting that shot. I practice it quite a bit,” said the 6-foot-4 Hamilton. “It’s hard to defend. On that one, I was little deeper than usual.

Being the best scorer on your team — especially when you average 20.5 points per game — can be an occupational hazard.

Hamilton’s signature shot in the corner — not too mention his other 11 first-half points — got the “little grey cells” working in the minds of the Deerfield coaches and players.

The Warriors spent the second half preoccupied with stopping Mr. Hamilton. And they successfully stacked the odds against the GBN shooting star.

“You have to be pretty impressed with the stuff he’s been doing (so far this season),” said Deerfield senior forward Nick Zwart, following his team’s 40-32 road victory on Jan. 9. “At halftime, we talked and he became the focal point.”

In the third quarter, Hamilton was unable to unlock his offense. He took only two shots — and one was blocked. He also went scoreless in the fourth quarter to end up with 13 points — seven under his season average.

“He’s one of the best shooters in the area, and he made a lot of tough, contested shots in the first half,” said Deerfield head coach Dan McKendrick. “And when we relaxed on him a little, he made us pay.

“So, we made him the focus in the second half,” the coach added. “Our goal was stopping him. We tried to give him very little space to operate.”

Hamilton, who hasn’t had many off nights, was quick to praise the other side.

“Deerfield made some nice adjustments,” he said. “They were very physical. There was lot of bumping. It was hard getting in the lane against them. And they did a good job of preventing the three-point shot.”

Hamilton has earned that big target on his back. He has been exceedingly good this season.

At the recent holiday tournament in DeKalb — known as the barbed wire capital — Hamilton came ready and (barb) wired. He claimed all-tournament honors with a couple of outrageous outings: tallying 30 points in a 55-46 first-round victory over Belvidere North and then putting 31 points in the scorebook on a career-high six three-pointers in a 56-50 loss to Moline in the finale. He also scored 25 points in a 67-56 win over Marmion Academy.

“He’s become one of the best shooters in the area,” said Weber. “He’s a very skilled player who knows what’s going on out there.”

Hamilton’s three-point accuracy has been three-mazing: 34-for-63 (54 percent).

And his free-throw shooting? Same thing.

Last year, Hamilton came off the bench for the Spartans and wound up averaging 4.8 points per game. He was 15-for-47 from three-point land and 26-for-30 from the foul line.

“We had a lot of experienced players last year,” said Hamilton. “Coach thought it was best for me to come off the bench to spark the team.”

Hamilton, who played his club ball with Illinois Old School for the past two years, did all he could to prepare for this season. He spent a lot of time practicing game-situational shots. And he powered up his legs for the rigors of a full season.

“This year I’ve been given the opportunity to prove myself,” said Hamilton, who also leads his team in rebounds (5.0 per game). “I’ve developed.”

He got the basketball bug from his dad, who grew up in northern Pennsylvania.

“My dad is pretty big fan of the game,” said Hamilton. “He still plays in a men’s league on Wednesday nights.”

Like his dad, the GBN standout doesn’t intend to give up the game any time soon.

With his size and shooting ability, Hamilton has caught the attention of several Division III schools.

“I’m being patient about it,” he said. “Keeping my options open.”

No doubt, he’ll give it his best shot.

Notable: The Spartans (8-6, 2-2) played Deerfield without the services of junior guard Zach Hoffman (foot injury). Hoffman is averaging 5.08 points per game. He leads the team in steals (31), and he’s third in assists (27). … GBN also has played the entire season without senior forward Jan Siegien, who averaged 15.2 points per game last winter. He’s been sidelined since summer with an ACL injury — but he could be back soon. “He’s a great shooter,” said Hamilton. “And we’ve missed his experience. It will be good to get him back. We need more scoring.”