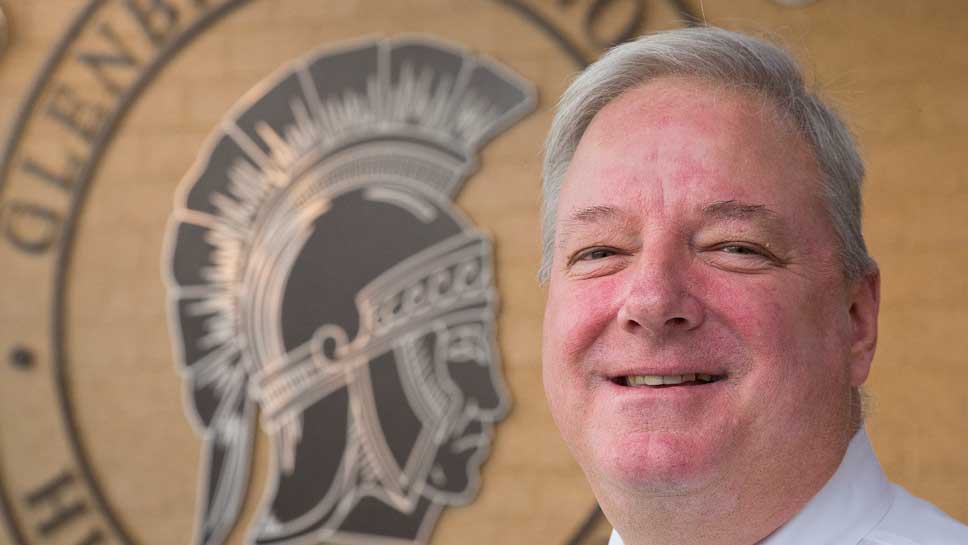 “We’re in there, still stunned, still trying to process the win,” recalls the 56-year-old Pryma, now the principal at Glenbrook North High School. “We’re giggly. I hear a knock on the door. An assistant coach answers it.”

It is Steve Pappas. The coach of the defeated team would like to address the victorious team. Pryma is all for it.

What Pappas said to Pryma’s players makes Pryma’s eyes well up as he shares the anecdote in a Q & A session in mid-December. He chronicles it and many other moving moments in his book, Coaches of Chicago: Inspiring stories about leadership and life (2014, Windy City Publishers). Pappas, Rick Malnati and Gene Pingatore were central figures in the stories. Pappas, who also coached boys basketball at Deerfield High School, died in 2006 after a two-and-a-half year battle with non-Hodgkin’s lymphoma; Malnati, currently Fenwick’s boys basketball coach, helmed the varsity boys basketball program at New Trier High School from 1996-2008; and Pingatore is in his 45th season as boys basketball coach at St. Joseph High School in Westchester.

“Their stories provide tremendous guidance to me as a high school principal,” writes Pryma, who also served as the athletic director at Highland Park High School (1994-99) and as varsity boys basketball coach at Evanston Township High School (1999-2005).

“Candidly,” he adds, “they inspire me to be a better human being.”

Q: What did Steve Pappas say to your St. Ignatius team in the locker room that night?

A: You have to know, Steve — my dear friend, a man I considered my brother — was devastated when he spoke to my team. But it was an obligation to him, telling a worthy opponent how well it had played, recognizing a fine effort. He spoke to other opponents after losses. I had pushed our kids so hard, and for Steve to acknowledge them the way he did that night … it meant so much to me, to my players, to our program. Our team took a major step that season, and it started with that [December] win over Gordon Tech.

Q: What motivated you to write the book?

A: I wanted to detail what these three great men — these three pillars of education, these icons — did for me through basketball and through the opportunities I had to be around them. I owe a lot to the game of basketball and to Chicago basketball. The Chicago scene was, and still is, filled with great basketball coaches and players and fans.

Q: What’s unique about Chicago basketball at the prep level?

A: It’s physical, full of energy, an in-your-face brand of basketball. Coaches from all over the country became aware of that at Five-Star basketball camps [where he served as a coach in the 1980s] in Pittsburgh. Chicago basketball was different. Chicago kids dominated. I remember games on Court 2 at those camps. I remember looking up and seeing Bobby Knight in the stands. John Thompson, Dean Smith, Jim Valvano and other great coaches from colleges were in attendance, too. Rick Pitino worked the camp.

Q: Chicago basketball or New York basketball, which is better?

Q: In your first year at Evanston, your Wildkits beat Rick Malnati’s New Trier Trevians in your very first Evanston-New Trier matchup. Your memories of that night?

A: Divine intervention. We won, with two of our stars sitting out [for academic reasons]. The message got out. The message was, ‘Our program has academic expectations.’

Q: What was it like facing Malnati’s New Trier teams?

A: Rick brought an intensity, such an intensity, to games. A pursuit of perfection. He is a relentless competitor, a visceral competitor. But Rick also has a wonderful sense of humor, and he’s self-deprecating, thoughtful. Before the start of one of our games [at Northwestern University’s Welsh-Ryan Arena], we enter the gym. It’s packed. We look at each other. We are thrilled with the turnout. He then says to me, ‘We need to thank the crowd.’ Before the tip, we head to the middle of the court [with a microphone] and thank the fans for their support.

A: Ping was on a stairwell, as a grade-school kid named Isiah Thomas [future St. Joe, Indiana University and NBA star] walked up the stairs from a locker room [following a tournament game]. Gene told him, ‘Nice game. I’d love to have you come to St. Joe’s.’ Isiah said, ‘OK.’ When I think of Gene, I think of how responsible he is. He knows coaching requires exceptional commitment. He never stops working.

Q: You have taught English. In the book you mentioned getting goosebumps while engaging in a discussion with either a small group or a student in a classroom setting. What was a moment in a basketball game that generated long-lasting goosebumps?

A: Our team (at St. Ignatius) was a 12 seed in the playoffs, playing mighty Proviso West, a two seed. At Proviso West. It was for a regional championship. We were down by one point, with three minutes to go. I called a timeout. We held the ball … for the rest of the game. [Pryma didn’t call another timeout]. The winning shot came off a ball screen at the top of the key. Arthur Reliford Jr. hit it, an 11-footer. He’s an attorney now. Great moment … a great moment for the program. Arthur’s dad was my assistant.

Q: The highlights of your prep basketball career at St. Patrick High School?

Q: Mike Kolze was Highland Park High School’s boys varsity coach when you were the AD at the school. His children played prep sports at a high level. What impressed you about the way he handled his program?

A: My last hire at the school was Paul Harris [Kolze’s successor and still the Giants’ coach]. I thought what Mike told the parents of his players each season was great. He used the image of a traffic cone to compare how he saw his program and how parents saw their kids. A coach looks from the small end … looks at the big picture out there, at the direction he wants to lead the entire team. A parent, though, likes to look in from the wide end, directly at the small end, which represents that parent’s child and — in some cases — that child’s playing time. That was his way of making it clear to the parents that there’s conflict at the beginning. But that conflict is also a natural thing. It’s such a profound way of looking at coaching and the coach-player relationship versus the parent-player relationship.

Q: The voice of Steve Pappas’ widow, Cathie, is featured throughout the book. Some of the best parts of the book are the passages about the couple’s interactions with each other. One day she asked him to teach her the fundamentals of basketball; he agreed and then told her to throw a basketball against a wall, so he “could see what I have to work with.” He liked to look up at the stars at night with her and ask, “Well, what do you see?” What was it like interviewing her?

A: I was grateful for getting to see Steve through the lens of Cathie. Her voice is eloquent in the book. She’s a great writer. She’s retired now. Both Cathie and Steve taught English at Deerfield High School. They team-taught classes, so Cathie got to see, firsthand, the impact Steve had on his students. And Steve had quite an impact on everybody who took his classes.

Q: What’s the difference between the prep basketball player of 20 years ago and today’s prep hoopster?

A: They’re bigger, stronger, faster. Equipment is better. Shoes are better. Parents are investing significantly in the development of their children as athletes. There’s a lot of science behind it. There’s a better understanding of that development. And there’s much scrutiny on players today. Players, I’ve noticed, are developing without imagination. Imagination is missing. Players used to use their imagination — their creativity — when they played pick-up games, when they played for hours at a playground. Some of the best lessons I learned were during basketball games, played outside, played without the presence of parents, of adults. I learned fisticuffs in basketball lead to nothing. I learned there are other ways — better ways — to resolve conflicts on a basketball court.

Coaches of Chicago can be purchased at The Book Bin in Northbrook and at Amazon.com. Visit the book’s site at www.coachesofchicago.com.