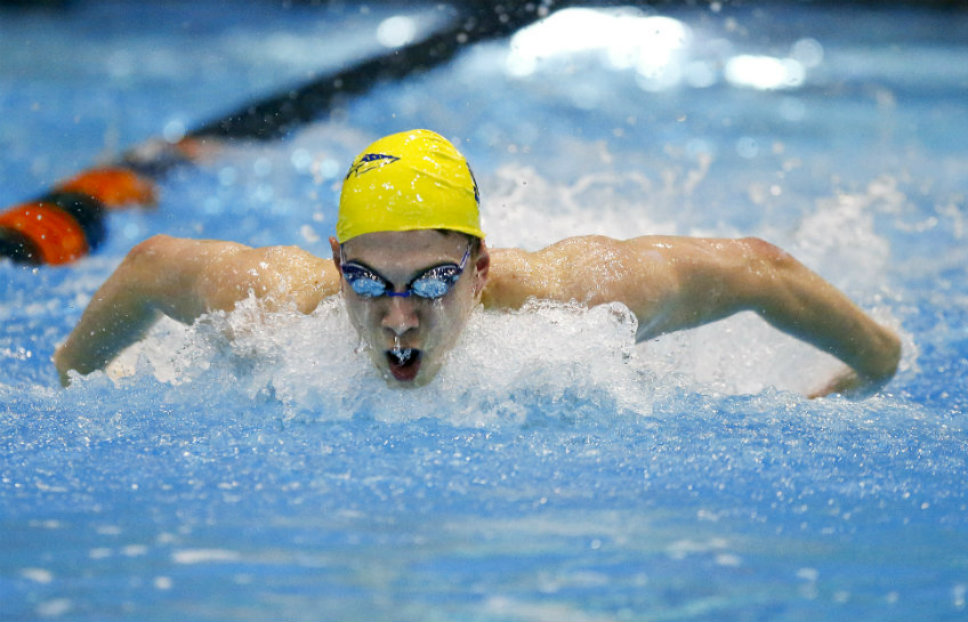 Lake Forest High School’s Dylan Boyd drives to a first-place finish in the 100 butterfly at the Evanston Invite. Photography by Joel Lerner

Dylan Boyd owns a Mickey Mouse towel and uses it at swim meets. It hung neatly on a rod, behind where Boyd and his Lake Forest High School teammates and coaches hung out in between races at last weekend’s Evanston Invitational.

A song blared in the natatorium shortly after the conclusion of the meet. Boyd, a sophomore, had never heard the tune. The vocalist sang the word, “yummy,” a lot. “Tummy” was another prominent word in the lyrics.

“Dylan is light-hearted, and I love that about him, love that he shows that side,” said Scouts coach Cindy Dell, standing about five yards from Boyd’s towel, purchased at Disney World when he was an eighth-grader living in Pittsburgh. “He’s got a looseness about him. But he is severely competitive. That competitiveness comes from his heart, from deep in his gut. He has matured a lot since last year, a ton. He trains incredibly hard. The intensity … it’s all there, it’s where it should be, in the right way, in the right direction.”

Boyd’s story began in Australia. He lived there and swam there before moving to Pittsburgh as a seventh-grader. The 6-foot-2, 180-pounder still owns an Aussie accent. It isn’t thick, isn’t Crocodile Dundee heavy. It’s noticeable, though. He speaks with a faint Down Under lilt. It’s cool to some, maybe yummy to others.

Before deciding to move to Lake Forest in time for Boyd’s freshman year, Boyd’s parents Googled “Lake Forest.” A few clicks later, the Boyds discovered some boys — now men — had trained with Lake Forest-based swim clubs. The boys’ names were famous names back then. They are still famous. Matt Grevers, for one. Conor Dwyer, for another. Both competed for the USA at the 2012 Summer Olympics in London. Both might collect more swimming medals at the 2016 Summer Games in Rio de Janeiro.

Dylan Boyd and his family and his Mickey Mouse towel settled in Lake Forest. In the fall of 2013, at the start of his freshman year, Dylan had doubts. About swimming. About swimming for the high school’s team, specifically.

“I wasn’t sure I wanted to go out for the team,” Boyd recalled.

He went out for the team. He made the varsity team. But the whole team atmosphere was, well, foreign to him.

“In Australia,” Dell said, “more emphasis was placed on individuals, instead of the team. Dylan didn’t quite understand that. New school, new training, new friends, new everything. It was difficult to adjust to all of that.”

Boyd qualified for the state meet last winter as a member of the Scouts’ 400 free relay. He swam leg No. 3. The other legs were Daniel Smith, Michael LeMay and Symen Ooms, all of them current seniors. The quartet finished 13th (3:12.65), missing a berth in the consolation finals by one spot.

Boyd trained with the Lake Forest Swim Club in the offseason. Things started to change. Things got more comfortable for Boyd.

“It’s very difficult to find yourself, at first, in this community,” Boyd said. “Now, though, I feel mentally stronger. Pressure is off. I know what to expect.”

Dell knows she has a veritable force in Boyd, a reliable points-producer at meets. What he accomplished at last weekend’s invite — one gold, three silvers — demanded rounds and rounds of applause. Boyd, though, wasn’t exactly fresh and rested for that medal-heavy show.

Boyd swam 4,500 yards in Lake Forest’s pool before getting on a bus bound for Evanston. He wasn’t alone that morning. His teammates swam the same distance.

Tom Brady threw for 4,109 yards in 16 regular-season games for the New England Patriots in 2014, for those looking for a little perspective.

Scouts swimmers arrived at the meet tired. They swam some more. They left tired. It’s January, No. 12 on a typical swimmer’s list of favorite months of the year.

“I had them swim those yards because of the weather [during the week],” Dell said of the frigid conditions that forced some North Shore schools to close and cancel sports practices.

Boyd must have been spent, dog-tired, when he climbed a starting block for the first time on Jan. 10. It did not matter. He needed a little more than 52 seconds to complete the race, to win the race. Runner-up Joe Widuch of Neuqua Valley needed 52.6 to complete the same race.

It had to be tempting. Tempting for anybody in the Scouts’ camp to ask Widuch, “So, Joe, how many yards did you swim at your pool this morning?”

Notable: Scouts junior Alex Streightiff topped a highly competitive field of 45 divers at the New Trier Invitational on Jan. 10. He amassed 505.55 points. Loyola Academy sophomore Chris Canning — fourth at state last winter — earned runner-up honors with a 494.15-point effort. Lake Forest junior John-Michael Diveris finished sixth (444.15). … Smith pulled his way to runner-up honors in the 100 backstroke (53.59) at the Evanston Invite last weekend. Smith also collaborated with Boyd, LeMay and Ooms on those runner-up relays (200 free, 400 free). Ooms sped to second-place in the 50 free (21.7), a time that would have been fast enough for 10th-place points at the state meet last winter.