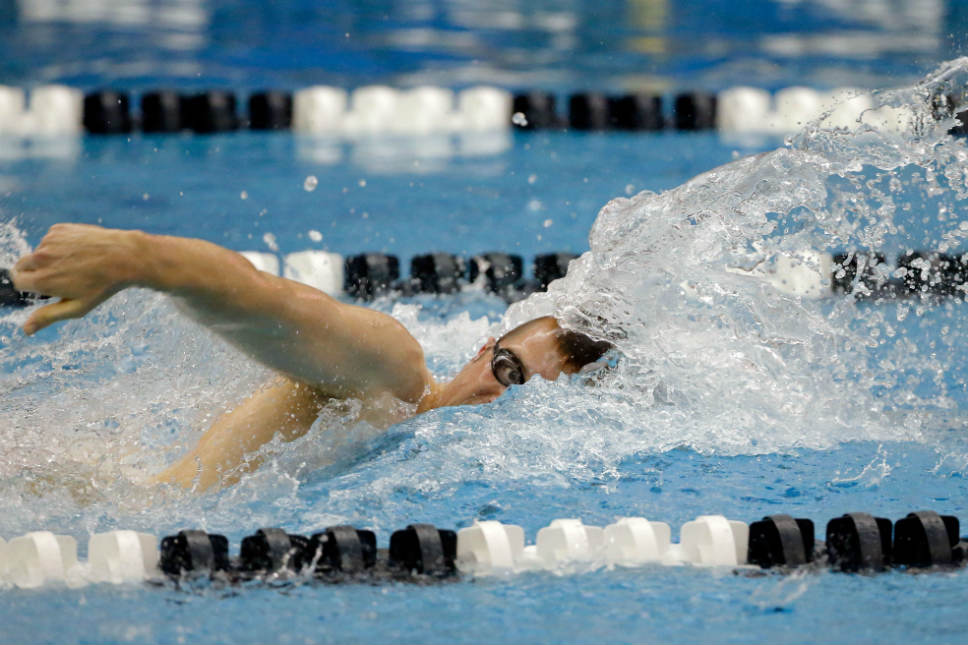 Tommy Hagerty of the Titans contends in the 100 freestyle during a recent meet against Highland Park. PHOTOGRAPHY BY JON DURR

The shout came from the balcony in Glenbrook South’s natatorium in Glenview. The voice belonged to a woman in her 20s, two pieces of luggage in tow. The woman was waving.

Glenbrook South senior swimmer Tommy Hagerty, flapping his arms and shaking his legs and jumping before the start of the 400-yard freestyle relay, heard the shout. He stopped moving on the pool deck. Then he turned his head, looked up, smiled and acknowledged the shouter, also smiling. His sister, North Carolina resident Kelly Hagerty, had arrived from an airport, just in time for the last race of the Highland Park High School-Glenbrook South dual meet on Dec. 18.

More than seven years ago, the siblings’ positions in the natatorium at Evanston Township High School were reversed. Tommy was a spectator then, looking down at a pool and swimmers, too many to count. Kelly was a Glenbrook South junior then, preparing to race in the championship heat of the 50-yard freestyle at the 2008 state meet. Six girls climbed start blocks, got ready, got set. Beep. Six girls entered the pool, water flying, arms propelling. The little brother watched his big sister, only his big sister. Kelly, the third-fastest qualifier in the previous day’s preliminaries, churned for 25 yards, ricocheted off a wall, churned for 25 more yards. The top three racers touched the final wall, seemingly simultaneously.

Eyeballs in the balcony and on deck shifted quickly to the scoreboard:

“It was crazy, being there and watching her win that race,” Tommy Hagerty recalls. “I’d seen her swim at meets my whole life. That race, though, that win … exciting. It was an exciting time for my family.”

He sometimes cried before swimming practices.

“I was a little overweight, and I didn’t always want to swim,” Tommy, now standing 6-foot-2 and weighing a sturdy 185 pounds, says. “My sister encouraged me to stick with swimming. She told me, ‘Don’t give up.’ My mom [Anne] told me the same thing.

“Kelly,” he adds, “has been my main inspiration. What she did at state that year, finishing first in the 50 free, really inspired me.”

Tommy Hagerty’s love for the sport of swimming grew each time his personal-best time in the 500 free melted. The kid brother of a former Titans state champion tried out for the swimming program at Glenbrook South as a freshman, in 2012, hoping to show he was varsity timber. Titans varsity coach Keith MacDonald liked what he saw from the kid. Hagerty made the varsity club.

“At the time I thought, My sister must have convinced Coach Mac to let me swim on varsity,” Hagerty says.

He was fast enough to better the state cut in the 500 free as a sophomore. Unfortunately for Hagerty, two of his teammates in the 2013-14 season — a freshman, Sam Iida, and a senior, Kevin Benson — swam faster times in the 500 free than he had. Only two entrants from each school get to vie for state berths in events at sectional meets. Hagerty settled for relay-alternate status at the state meet. He was OK with that, thankful for that. It gave him the opportunity to see and hear and feel a state meet from a poolside spot.

What Hagerty accomplished at the two-day state meet the following season, last winter, was part wonderful and part stunning, filled with singular feats and double takes and looks from teammates that screamed, “Are you kidding me?” Hagerty had qualified for state in the 500 free with a sectional time of 4:43.4. That put him 25th among qualifiers in the event. In a 500-free heat in the state preliminaries, Hagerty clocked a 4:36.03. Blink, blink. Take, double take. Only one other qualifier — Iida, with a 4:32.01 — would swim a faster time in the prelims.

He swam a 4:38.57 in the championship heat of the 500 free on the next day, a fifth-place effort from a non-circle seed (seeds 25-39). Among the hands he shook after receiving his first state medal belonged to the state champion in the event, Iida (4:31.13). Hagerty, rookie state participant, also helped a pair of Titans relays earn state medals (400 free, third place; 200 free, fourth place).

“His breakthrough swim [in the 500-free prelims], that was impressive,” MacDonald says. “It surprised me. It also was fun to see and to see Tommy’s reaction to it. This year he understands his training better than he did last year. He’s also developing a sprinter’s mentality … something we’ll need from him at the end of the season.”

One of Hagerty’s favorite escapes from the pool this winter is on the sideline of a basketball court. He coaches a CYO team of peers once a week, dressing the part (nice shirt, nice pants, with a tie) and acting the part (yelling, at times).

“I mimic college coaches when I coach basketball,” Hagerty, a captain of this year’s Titans swim team and a water polo player (hole set) in the spring, says. “I copy Coach K [Duke men’s coach Mike Krzyzewski]. You know, the way he’s so serious while sitting on the bench during games. It’s fun.”

Hagerty intends to watch Boston University basketball games next winter, as long as they don’t interfere with his BU swim team commitments. He loves the city of Boston, the vibe at BU, and he can’t wait to hit the water for the Terriers. He is thinking of becoming an athletic trainer one day. His interest in that field heightened last spring after his nose got in the way of a flying elbow in a water polo game. Painful, educational.

Hagerty pushes Titans swimmers these days, encourages them, pulls for them. Leadership drips from the swimmer.

“Tommy is a really hard worker, his technique has improved, and his strokes in the 500 free … they’re smooth,” Titans senior breaststroker and relay member Byron Mandell says. “He’s an energetic guy, gets the team going, leads our cheers [in team huddles]. I like how he brings life to everybody on the team.”

Kelly Hagerty’s little brother climbed a start block, preparing to swim his leg of a Titans 400 free relay in that dual with visiting Highland Park last month. Tommy, the anchor leg, blasted off the block and pierced the water, following 100-yard legs from Byron, junior Lee Bryan and senior Peter Dales. Kelly Hagerty, a former swimmer at Duke and current college adviser/swim coach at Lee County High School in Sanford, North Carolina, watched her little brother, only her little brother, from a balcony. Tommy swam hard, swam fast, nothing new. He touched the final wall. The quartet’s time of 3:23.84 was a first-place time, by nearly eight seconds.

The little brother looked up, again, at his biggest fan, his visiting sis, after exiting the pool. Both were smiling.