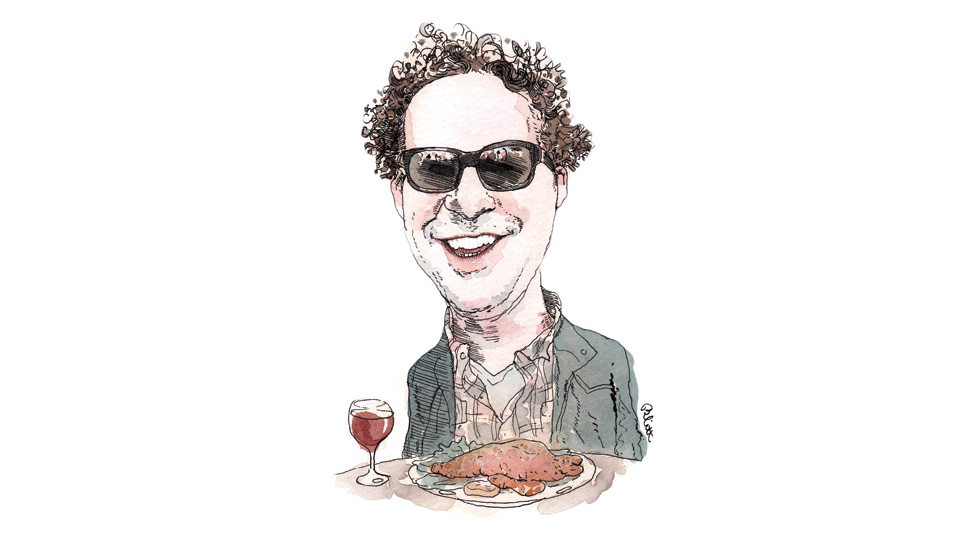 Francesco’s Hole in the Wall is anything but a hole in the wall.

It’s a Mediterranean paradise in minima forma, tucked away off of Skokie Boulevard in Northbrook — and it’s completely packed.

But time and space suddenly bend when Chuck “Diesel” Pusateri walks through the door.

“This is the friend you’re meeting?” says the stunned hostess, who embraces Diesel and asks the million-dollar question: Did he drive the truck to lunch today?

Instantly, a table materializes in front of the menu, which is a looming chalkboard on the far wall. We order a bottle of wine and enough food to rival a Coney Island eating contest: a combination of Diesel’s favorites that include chicken parm, mushroom and sausage thin-crust pizza, capellini, and Italian sausage.

And then we begin to eat like we’re sharing our last meal.

Or — as in the case of Diesel — a first meal, after returning home from an off-roading odyssey across the second-longest peninsula on earth, Baja California, which is oftentimes referred to as, simply, the Baja.

It’s a rugged, sun-dried stretch of terreno escabroso with at least four deserts and steep, mountainous cliffs along the coast. From Tijuana to Cabo San Lucas, bandits and cartel members huddle together in the dark recesses of tourists’ minds. And yet, on the third week of November, an international community descends on the peninsula for the Baja 1000 race: a ragtag medley of off-road vehicles that gives the dusty race a mechanical, post-apocalyptic vibe not unlike Mad Max.

“The Baja is Mars,” Diesel says between bites, emphasizing the red planet. “It’s not very populated, so you eat where you can.”

The meal of choice for the 36 hours they were behind the wheel?

“Power Bars, Coca-Cola, and water. A lot of water.” That’s because, during the day, temperatures climb to over 110 degrees.

When he’s not co-piloting team Truck 66’s trophy truck — the fastest class of off-road racing vehicles that look, in all honesty, like pickup trucks on steroids — the Glenview native is a high-end real estate developer with a serious penchant for extreme sports. This adds a touch of flavor to his vocabulary that would find him comfortable in most, if not all, surfer-bro communities. Words like “craziness,” “gnarly,” “sick,” “aggressive,” “rock n’ roll,” “dope,” “mad,” “hammer,” and “cruise” — as in, “We’re going to cruise to San Felipe” — roll off his tongue, mid sentence, and hit their target with genuine feelings of expression.

Less than a month or so before the race, Diesel happened to be out in Napa Valley for one of his best friend’s weddings when his phone rang. His friend Harry Hepler was on the other end of the call with important news: Hepler’s co-driver and navigator had just dropped out of the race. “And you’re first on the list,” he told Diesel.

Like a “Mission Impossible” movie, Hepler gave Diesel three days to consider the offer. (Your mission, should you choose to accept it … is to help me navigate a 1,275-mile course, cutting a winding path through a hot landscape from Ensenada in the north down to Le Paz.)

“What lunatic would do something like that?” he says, smiling. Then he gets very serious. “They’re going to think this is a joke, and nothing is a joke regarding this sport.”

“They” are the Truck 66 team, a dedicated group of mechanics and experts that banded together to accomplish Hepler’s hitherto unaccomplished goal of finishing the race. Hepler had entered the race twice before, and both times went home to Lansing, Mich. sore, tired, and defeated after not crossing the finish line.

Before Diesel knew it, he was in a truck with Hepler, pulling the black trophy truck with its yellow decals behind them through the mountains near the city of San Felipe. They were ostensibly there for a test run, but there was also something more ominous happening. Diesel was being tested.

“You take these two-lane roads with hairpin turns through the mountains and Harry’s doing, like, 120 [mph]. And I’m like, ‘Why’s he driving so fast? What’s the hurry, dude?’ These roads, people get killed on them all the time.”

Hepler, who has been friends with Diesel for years — after learning of their shared interest in motocross and extreme sports — was testing his friend to see how he would react.

“I’ll tell you what, a lot of people wouldn’t have been able to be in the car with him,” says Diesel. “You can’t take someone you don’t trust.”

After a moment’s contemplation, he adds: “You learn real quick if it’s meant for you or not.”

Hepler saw in Diesel a good problem-solver, an organized individual who had ran his own renovation company since he was 19 years old. Still, Diesel later found out through a team member that the team had placed bets on whether he would make it through training or not.

But the dude abided, and Hepler’s prescience came true. On one of the pre-runs they blew a tire but forgot a jack, so they resorted to pushing the truck onto a mound and rolling rocks under it to get some lift to change the tire. They carried two jacks during the race and two tires.

“We had two, then we had one … then we had none,” says Diesel, who remembers at one point getting out and seeing only a frayed edge of dark plastic around the rim where one of the tires should’ve been.

Going into the second night, after already going 24 hours with no sleep, they came across a guy stuck in an arroyo (riverbed). He was in a buggy with most of his vehicle submerged in water.

“We basically just rammed him to dislodge him,” explains Diesel. That did the trick, but at the cost of at least one of the front headlights. (Adding to their troubles: they had already had problems with a malfunctioning GPS at the starting line.) Plus, there was plenty of the course left to go.

The plates seem like the size of truck tires, and as endless as the llanura. We’ve been served dish after dish, glass after glass (polishing off the bottle of wine), and two shots of — I kid you not — Hot Sex, until the restaurant is completely empty save for Diesel, myself and the owner of Francesco’s, a man by the name of Frank Gallo and a close friend of Diesel’s father (and who is affectionately referred to by the nickname Movie Star for starring in a John Cusack film).

Movie Star has taken the reins of the interview, asking Diesel questions and then nudging me in the ribs, “How’s that for a question, huh? Huh?”

He asks Diesel if they finished the race. He tells him — us — they did, coming in 17th place with a time of 36:59:11. Movie Star then asks him a question that has probably been burning the back of Diesel’s mind ever since returning home.

Will you be the one driving the truck next?

“Yeah, you want to drive it,” acknowledges Diesel, with a nonchalance earned from surviving a brutal, unforgiving race. “But the navigating part is key because, for me, learning about the truck and the mechanical part, once you really get it — the more you know, the faster you go. And that’s our motto.”