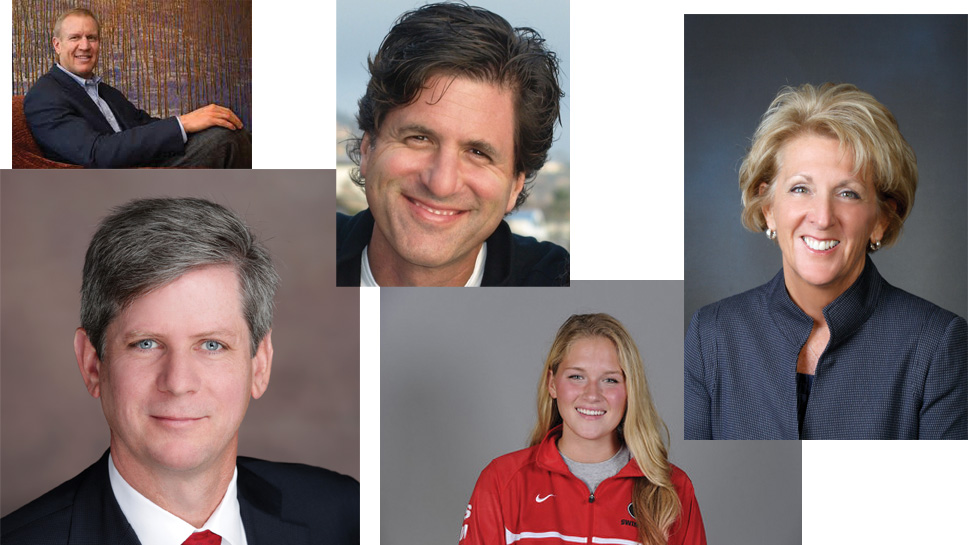 Forgive Linda Yonke and Tom McAfee for already thinking about 2017 … in early 2015.

They are major players in North Shore construction projects that won’t be completed until then.

Another North is eyeing more world-class times in pools. Another might have to accept a Screen Actors Guild Award on Jan. 25. And the fifth will move from the North Shore more than 200 miles south to a mansion in Springfield and make crucial decisions on behalf of Illinoisans.

More than a year before the 2014 gubernatorial election in Illinois, Winnetkan Bruce Rauner, venture capitalist, told The North Shore Weekend, “We [Land of Lincoln denizens] need a CEO.”

Rauner hadn’t committed to running for governor at the time. The 57-year-old Republican ran. The Republican, a rookie politician, beat Democrat Pat Quinn on Nov. 4.

What he will face when his term begins on Jan. 12: a wealth of challenges, none more pressing than the state’s pension crisis. Financial trade publication Institutional Investor named Governor-elect Rauner the No. 1 most influential player in U.S. pensions. Illinois’ pension debt exceeds $100 billion.

Rauner does not like how Illinois treats its businesses. The state’s corporate taxes force too many businesses to either relocate to another state — or at least consider such a flight.

“Illinois is hostile to business in general,” said Rauner, who will oversee the planned reduction of corporate taxes in 2015. “Most politicians think business is a piggybank to be broken into for money. We’ve got to change the business climate. That’s Job 1.”

Two years ago, U.S. Olympic Trials, Omaha, Neb. Smoliga (Class of 2013) was still in high school then. Smoliga finished fourth in the 100-meter backstroke. Had the 6-foot-2 teen from Glenview placed a tad higher she would have been able to march alongside Michael Phelps during the opening ceremony at the 2012 Summer Games in London.

“Wow, that was crazy, so close … surreal,” recalled Smoliga, a University of Georgia sophomore and the reigning NCAA champion in the 50-meter freestyle.

Her best friend after the Trials was youth. It is still a reliable companion. Now 20, Smoliga will be a legitimate threat to qualify for the 2016 Summer Games in Rio de Janeiro, Brazil.

But she has Toronto on her mind these days. That’s the host city for this summer’s Pan Am Games. The world’s third largest international multi-sport competition starts July 10.

“I get to swim for the best college program in the country. My coaches are great. I didn’t lift weights when I was in high school. I lift now. And I’m doing more dryland swimming workouts, more cardio exercises.”

The City of Lake Forest approved the $378 million plan in 2012. The groundbreaking ceremony at the site of the new Northwestern Lake Forest Hospital (NLFH) took place in 2014.

Tom McAfee, president of NLFH, launched the construction of the three-pronged project. The central piece will be the new hospital — 483,500 square feet of new construction — with a health and wellness branch to the north of the campus and education and research facilities to the south.

The brick hospital started housing patients in World War II. From a distance it could almost pass for an old-school schoolhouse. A large American flag — on a tall pole, implanted in a circular patch of grass — stands sentry in front of the building’s entrance. You almost expect children, at any minute, to spill out of the building at the sound of a school bell.

“I’m really excited about advancing one of the most significant healthcare projects on the North Shore,” McAfee said. “To break ground, to work with my peers on something this important to Lake Forest and its surrounding communities … it’s rewarding, challenging. What we’re doing requires a lot of logistical support. We’re getting that. We’re making progress. You know what else? The weather is cooperating.”

Concerned about the disturbing drop in teaching candidates at Big Ten schools and other U.S. colleges.

“It’s going to happen. We’ve started,” the New Trier Township High School superintendent said last week, referring to the school’s refurbishment covering 274,000 square feet, mostly new construction. “One of our challenges during the two school years and three summers is to make sure the New Trier experience is as exciting and as a good as it always has been. The work will not displace students or teachers. Our plan is to keep the programs — all of them — intact, to maintain our quality of education.”

A quantity, meanwhile, worries the veteran educator. The number of highly qualified teaching candidates, locally and nationally, is heading south. Big Ten universities have seen a collective 25 percent drop in such candidates, she noted.

“It is alarming,” Yonke said. “Big Ten schools have always been outstanding training grounds for teachers. We’re in a critical time; a lot of states are. It’s getting more and more difficult to attract highly qualified people to the teaching profession. It’s an issue that must be addressed.”

One of the downsides of serving as a busy superintendent is the dearth of opportunities to interact with students. Yonke knows that. Yonke also intends to unearth opportunities. It’s one of her New Year’s resolutions.

“I resolve,” she said, “to find ways to meet with students more regularly. I love working with teenagers. It’s a great way to get a real pulse on what is going on at the school. Teens have a lot to say, and we all need to listen to them more often.”

Glenbrook South High School alumnus Steven Levitan spoke at his alma mater’s graduation in 2001. The director, screenwriter and producer did not bring the house down.

He flattened it. Quickly and resoundingly.

Levitan, 52, has been moving audiences for decades. As an executive television producer, he won an Emmy Award in 1996 for “Frasier” in the Outstanding Comedy Series category. Among the TV series he has created are “Just Shoot Me!” and “Modern Family.” The latter sitcom received four Screen Actors Guild Award nominations last month.

“I watch [“Modern Family”] often,” Wegley said. “It’s hilarious. Everything he does is outstanding. He’s a very, very talented gentleman, one of our most distinguished alumni.”

Levitan was named Turnabout Dance King at Glenbrook South, Wegley noted. He served as president of the student council his senior year. Variety shows? He performed in those. He probably stole them all, too.

“I’ve met Steven several times,” Wegley said. “He could not have been nicer. He’s a humble guy, a good guy, a crazy successful guy and a guy with a good heart.”