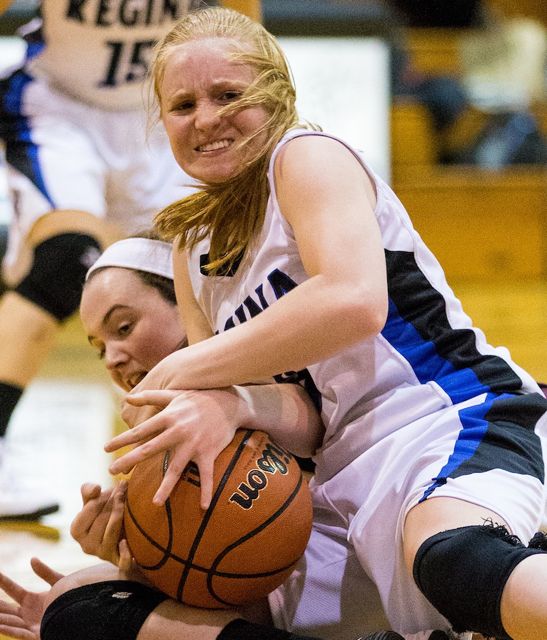 Shortly after a miserable, hard-to-take fourth quarter in a 58-29 setback to the Flyerettes of East St. Louis in Day 3 of the St. Viator Snowflake Tournament on Dec. 26, the Regina Dominican High School senior shot out of the gym, headed straight to the parking lot and jumped into her car.

“I was really upset (with that game),” said the highly competitive Degnan. “I needed some time alone. That was a rough game. I needed to figure out how I was going to fix things.”

How’s this for fixing things?

Less than 24 hours later, Degnan returned to Arlington Heights. She scored 26 points — including 18 in the first half — in a 56-30 win over Leyden in the third-place game of the Snowflake Tournament on Dec. 27.

“I don’t know. We might have been a little overconfident going into that game (against East St. Louis),” said Degnan. “We got into a slump. Our body language dropped.

“But today,” she added, “we were able to turn it around.”

Highlighted by that 26-point effort, Degnan was a hands-down all-tournament pick for the second year in a row. She finished the four games with 80 points.

And what makes her even tougher to defend is her ambidexterity. Degnan, a predominately left-handed outside shooter, is skillful with both hands — on drives to the basket.

“She’s got the ability to finish with her left or her right,” said Durham. “She’s very hard to guard.”

Asked if she was always a good outside shooter?

“When Coach Durham saw me shoot like that, she said, ‘Nope, we’re getting rid of that,’ ’’ said Degnan.

Not many (two-handed) shooters could have done what Degnan did in last year’s Snowflake Tournament. In a win over Fenton, she put up a career-high 37 points.

Degnan didn’t exactly come from a traditional basketball family. She has six sisters — and none of them play hoops.

“I actually owe a lot to Coach Durham,” said Degnan. “She’s the one who inspired me to continue playing basketball.”

With that 26-point outburst against Leyden, Degnan has eclipsed the 200-point mark for the season. Currently, she’s averaging 15.5 points, 4 rebounds, 3 steals and 2 assists per game.

Degnan definitely is a stalwart on defense. Her quick hands were on full display in the Snowflake Tournament. She had five steals against Leyden. And she had six swipes in her team’s 49-28 win over Fenton in Day Two action.

“Maeve is a well-rounded player,” said Durham. “And she’s at her best when she steps up on defense.”

Notable: The Panthers (7-7) opened tourney play with a decisive 52-23 victory over Glenbrook North on Dec. 22. Degnan finished with 17 points and three assists. Senior Maggie Palmer had 14 points and 12 rebounds. … Palmer had a fine tournament. She had 22 points and seven rebounds against Fenton. Against East St. Louis, she battled hard and wound up with 13 points and nine rebounds. And in the finale against Leyden, she had 10 points, eight assists, six rebounds and three blocks. For the season, Palmer is averaging 13 points, 7 rebounds and 2.9 steals per game. … Senior Audrey Jahns also had a solid final game. She had 10 points and five rebounds against Leyden.