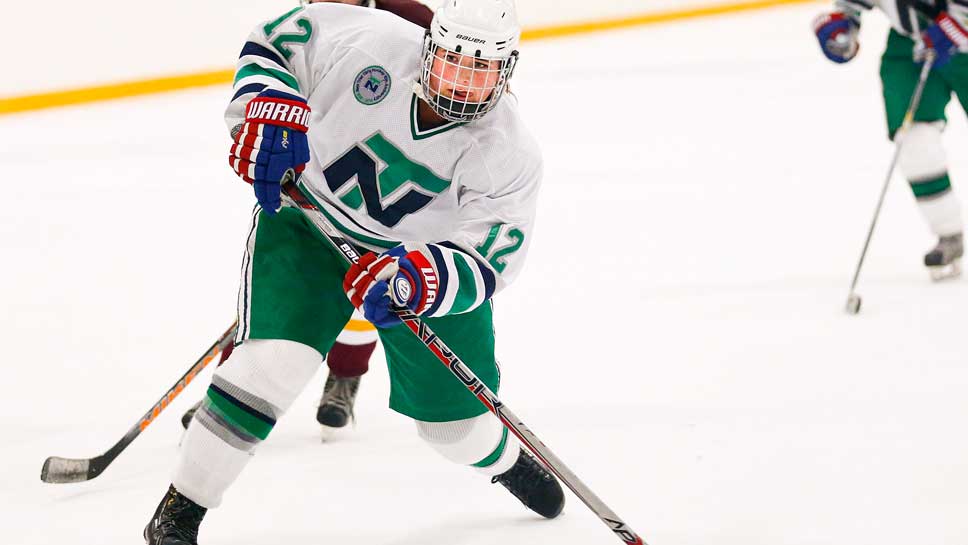 The memories make New Trier sophomore defenseman Tay Munson smile behind her caged hockey helmet following a recent game. She was a tyke at the time, a girl going skate toe-to-skate toe against boys in an official game, in gear that probably weighed more than she did.

For the first time.

Checks were allowed in the league.

First period, all those years ago, Munson was near a board and a puck. So was a boy. Munson checked the boy. Game on.

Munson absorbed the receiving end of a check later in the period. Game on … really on.

Munson is an ice chip off the old block. Her father, Lenny, is a New Trier Green boys assistant hockey coach. He played goaltender for Loyola Academy and University of Wisconsin hockey teams. He stopped shots. What he could not stop was his daughter’s desire to skate fast, deke, take shots and block shots against any gender. Dillon Munson, Tay’s brother, is a junior D-man for the New Trier Blue hockey club. When big bro and little sis are together, they talk about three things: hockey, hockey, hockey. When they get bored with any of those, more hockey talk.

“He’s my best friend,” Tay says. “I look up to him. He’s had a big influence on me; so has my dad. Dillon … he wrecks people in games. He’s fun to watch. I love going to his games.”

In a game against host Glenbrook at Northbrook Sports Center on Dec. 20, Tay Munson scored the first goal of a 7-1 NT victory. It came 37 seconds after the drop of the puck and with her father in attendance. Fast and furious. And fun. The Wilmette resident later assisted on senior Ali Griffin’s goal at the 6:48 mark of the first period. She made everything look so easy.

The number of checks she delivered and received?

Zero and zero. Checking is not allowed in girls prep hockey.

“She learned a lot going against boys all those years, from that young age until her freshman year,” Lenny Munson says. “When she was seven, maybe eight years old, she got the concept of skating down. It’s at that point when you think, ‘We might have something here.’ ”

They had something special. Only one New Trier freshman, Munson, played in the state championship game at the United Center last winter. When she took her first stride on the Chicago Blackhawks’ home ice, she saw people. Lots and lots of people.

“It was scary, looking around the United Center before we started,” admits Munson, a third-year Chicago Young Americans hockey player. “I was nervous at first. But after the first couple of shifts, the nerves went away. We got more and more comfortable [against Loyola Academy, Dad Munson’s alma mater]. Between periods, we said, ‘We need to go for it.’ ”

Not many sophomore hockey players could be categorized as “seasoned vets.” Tay Munson is a seasoned vet on another potent NT club (8-3-2). She skates like one, plays like one, talks like one. Hockey had her at hello.

“The team aspect of hockey … that’s probably my favorite part of it,” Munson says. “It’s fun getting assists and getting goals. But the best feeling is the feeling all of us get after any player scores.”

“She’s pretty quiet,” says Maggi Tyska, New Trier’s assistant coach who works primarily with the defensemen. “But she gives pep talks to [her D-mates] on the bench. I hear her do that. That’s nice to hear. Even when we were down by as much as we were against Evanston, there was Tay, pumping up her D partner [junior Grace Hayes] and staying positive.”

On the other end of the rink, you don’t want to mess with Munson’s slap shots. A goalie found that out the hard way last month. One of Munson’s shots knocked that goalie down — the hockey equivalent of picking up a one-pin bowling spare.

“She has a great all-around game,” NT coach Nelson Forsberg says of NT’s top scorer among defensemen. “She’s awesome and young, with a lot of energy. Good hockey sense, fearless. It’s tough to get around her. You don’t have to worry about a thing when she’s out there.

“I like it when she makes a stop in our zone, gets some room on the ice and then takes off with the puck.”

One of the most thankful hockey players on the North Shore has to be Talbot, a sophomore wing.

“Tay is fun, energetic,” Talbot says. “Her shot … amazing. It’s amazing, that slap shot of hers. And she can get around any player. Tay does a lot for us, does a lot of damage out there. Tay is a weapon of mass destruction.”

She had just described Tay, hockey player, to a tee.

Notable: Junior Johanna Glaaser and senior Ivy Dynek each scored two goals in NT’s 7-1 defeat of Glenbrook on Dec. 20. Munson, Griffin and senior Barrett Sullivan tallied the others. The only goal against NT goaltender Katie Donovan came with 12 ticks left in the third period.