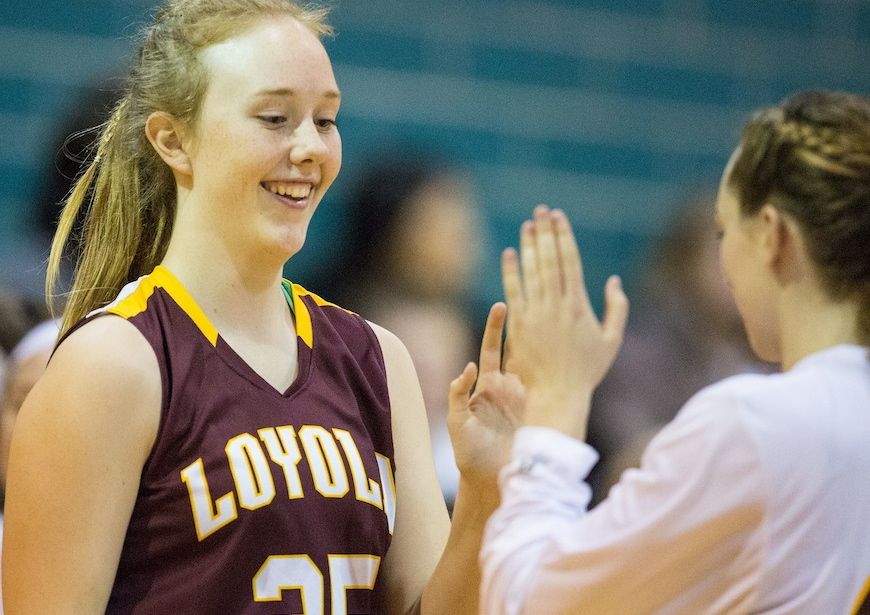 At least, that was the Liz Satter’s take.

The Loyola Academy senior hailed her coach’s unconventional — and motivational —decision of not starting the team’s regular five starters in the third-place game of the Mundelein Holiday Classic on Dec. 27.

“He definitely got our attention,” said Satter, referring to Loyola Academy head girls basketball coach Jeremy Schoenecker. “He’s going to the play the girls who will hustle and play 100 percent all of the time. He definitely got his point across.”

A night earlier, points were painfully hard to come by for the Ramblers (7-6) in a 28-18 semifinal loss to Conant.

“My mom keeps stats, and she told me that we shot 15 percent from the field,” Satter said. “That’s not good. I think we hit rock bottom.”

In an effort to clear some heads, Satter, who made the all-tournament team along with senior teammate Sarah Elston, said that a “players-only” meeting was held prior to the team’s third-place game against Rolling Meadows.

“We haven’t been pushing ourselves as hard as should be,” said Satter.

“I’m trying to get them to play tougher mentally and physically,” said Schoenecker, following his team’s 39-30 setback to a solid Rolling Meadows team. “Right now, we’re not there.”

LA’s first five sat out the first four minutes of the game — and the Ramblers fell behind 12-0.

But things got better. Following a steal and fast-break layup by Alexa DeLeo, the Ramblers were within three points, 33-30, with 3:58 left to play.

DeLeo had one of her best games of the season. She not only led the team in scoring (10 points), but she also shined on the defensive end.

She was a lockdown defender against Rolling Meadows’ Meghan King, who went scoreless in the final three periods after hitting five three-pointers in the opening quarter.

Satter, meanwhile, did a lot of things well against the Mustangs. She wound up with eight points and 13 rebounds.

Freshman Lilly Wehman finished the game with four rebounds and three blocks. She received extended minutes, when Elston left the early in the third quarter with a head injury.

“Lilly is real athletic,” said Schoenecker. “We need to get her more minutes.”

Notable: Satter’s best outing in the tournament came in a quarterfinal win over Grant 65-33. She tallied 20 points and nine points. DeLeo scored 12 points against Grant, while Elston had nine points and three assists. Tyra Mills had six assists. … In the tourney opener against Hoffman Estates — a 59-26 victory — Megan Bonner led the team with 12 points. Elston had 10 points and eight rebounds. Wehman had eight points and five rebounds.

Grace Torkelson was rewarded for her solid play in the Warren Tournament.

The senior center, who averaged 12.8 points and 11.0 rebounds in the five-game set, was named to the all-tournament team.

Torkelson helped the Scouts to 3-2 tourney record. They are 9-7 overall.

The Scouts capped off the tournament by downing Carmel 56-47 on Dec. 27. Williams had 17 points, six rebounds, four assists and three steals. Torkelson had 13 points and nine boards, while Green had 10 points and eight rebounds. Freshman Audrey Kaus contributed seven points and nine rebounds.

The two losses came against Grayslake Central 52-46 and Wheeling 49-23. Torkelson had 16 points and 15 rebounds against Central, while Summerville had 11 points and 13 rebounds in that loss.