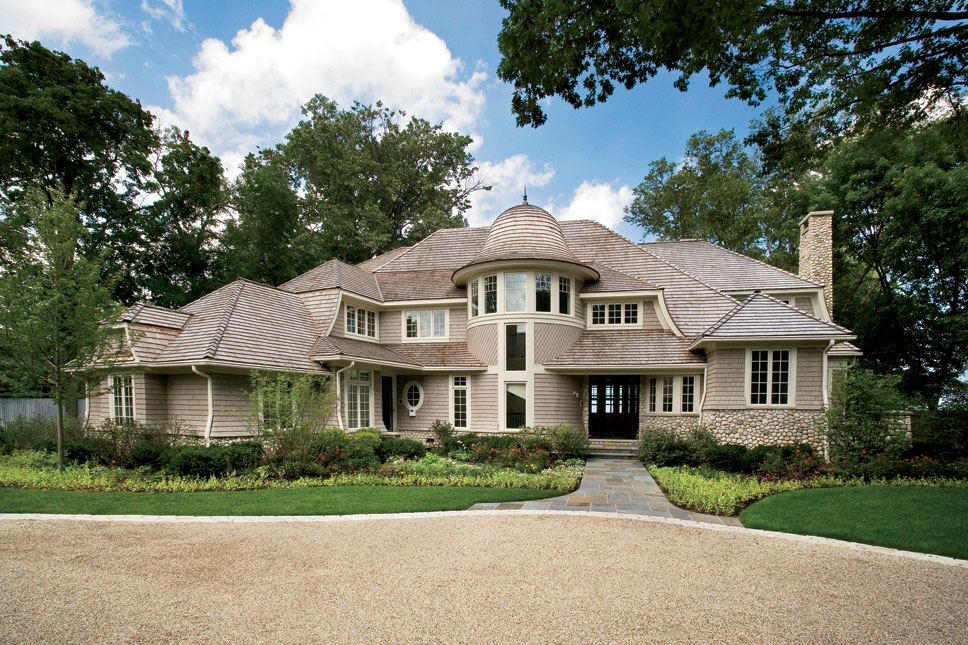 Words by Morgan Hogerty: When Orren Pickell, president and CEO of the Orren Pickell Building Group, met the homeowner, he immediately sensed two qualities—a decisive nature and a clear vision. In turn, the homeowner sensed two qualities of Pickell’s—commitment and attention to detail. The high regard and respect the men now share for each other began from a mutual appreciation of these qualities, was nurtured during the rapid design process, grew during the 12-month building process, and was cemented in the following years.

The homeowner, a retired executive and noted philanthropist, recalls that the house, located on a Winnetka lot bordered by a quiet park and Lake Michigan, began “as a way to keep busy, to fill my time away from the office in my new life as a bachelor.” Although he had built two houses, this house was his first project with the Orren Pickell Building Group. The six-month design process began with the homeowner showing Pickell a picture of Castle Hill Inn, a five-star hotel located in Newport, Rhode Island. Two aspects were very important to the homeowner: first, as many rooms as possible should have a view of the lake; and second, he wanted a turret modeled after Castle Hill’s signature turret. Although the Pickell team warned him the first aspect might be tricky, the homeowner proudly notes every room but two—the mudroom and a bedroom—has lake views. A turret offers spectacular Lake Michigan views from the “Crow’s Nest,” a light-filled sliver of a room. The homeowner greets each sunrise in the Crow’s Nest with a cup of coffee and offers a prayer of thanks “that I am lucky to be able to live with a view that changes every day. Some days fog rises up off the water, some days the lake is completely flat, some days we have fifteen-foot waves.” The turret is capped by “Willy the Whale,” a massive weathervane, which rides the wind as easily as his marine counterpart rides the waves.

A second turret gracing the front of the house contains a staircase unspooling like a satin ribbon from the second floor’s bedrooms to the main floor’s formal rooms ending in the lower level’s casual living spaces. The homeowner fondly recalls designing the main floor’s formal rooms. “It was really enjoyable from beginning to end with the Pickell team,” the homeowner recalls. “They sat me down with a big, blank sheet of paper and created a bubble for each room. They asked me how I planned to live in each room, how many people would be in each room, and the bubbles would grow bigger and smaller.” The first three years he lived in the house, it often contained more people than furniture. “All I had were a couple of La-Z-Boy recliners. I would throw parties for nonprofits, and we would just fill the rooms up with rental tables and people.” In 2010, the homeowner remarried a woman who is very active in a Chicago chapter of a national nonprofit. Thus, the parties with a purpose continue, although the rooms are now invitingly decorated with a mix of his wife’s family heirlooms, antiques from 200 to 400 years old, and pieces carefully selected with their Northfield-based decorator, Cindy Macfarland. “I have one important rule when it comes to making a purchase. All three of us—me, my wife, and Cindy—need to be in agreement.”

The property’s boathouse also offers an ideal venue for entertaining. The boathouse was a project highlight for Pickell, a longtime sailor. A wood-burning fieldstone fireplace warms up to 30 partygoers on the boathouse’s exterior deck. When the weather becomes too inclement, guests retreat to an enclosed living area. Rain or shine, all are watched over by Mildred’s Bell, a sentimental gesture created by Pickell’s crew. “One day (the homeowner) carried this enormous bell, he was really struggling with it, into our showroom in Northfield,” Pickell recalls with a laugh. “The bell was salvaged from a sunken vessel. On the bell was emblazoned the name Mildred, which happened to be the name of his mother. He had us build a stone tower so his mother could see it for Thanksgiving in 2013.”

Like Mildred’s Bell, the kitchen offers the homeowner an opportunity for reflection. “The kitchen and the keeping room in this house are bigger than the house I grew up in as a boy in Southern Illinois.” Surprisingly, the kitchen’s design was of little importance to him. When presented with Pickell’s signature three-page kitchen design check list, the homeowner resisted saying “I am a bachelor! I am just interested in a microwave and a coffee maker!” Instead, he urged Bridget Mobile, Pickell’s in-house kitchen designer, to design the kitchen she would like to see in the house. The homeowner treasures her response remembering that she “just glowed. I think she did a terrific job.”

The homeowner and Pickell’s relationship continued to thrive after the house was completed. “I recommend Orren so highly because his commitment to the house never wavered. There were very few problems, and I never had to fight to get them fixed. One phone call was all it took,” the homeowner recounted. Pickell is grateful for this endorsement as he feels it is a reflection of a higher standard exhibited by all of his North Shore clientele. “The North Shore clientele is different from my clients in Indiana, Wisconsin, other parts of Illinois, even downtown. They are truly fastidious about what they expect in all aspects of design. Not just the elevation and exterior but also the interior design of the kitchens, baths, all the way to the millwork. They want their expectations to be exceeded. Our attention to craftsmanship and our drive to excel is the reason we have thrived on the North Shore.”