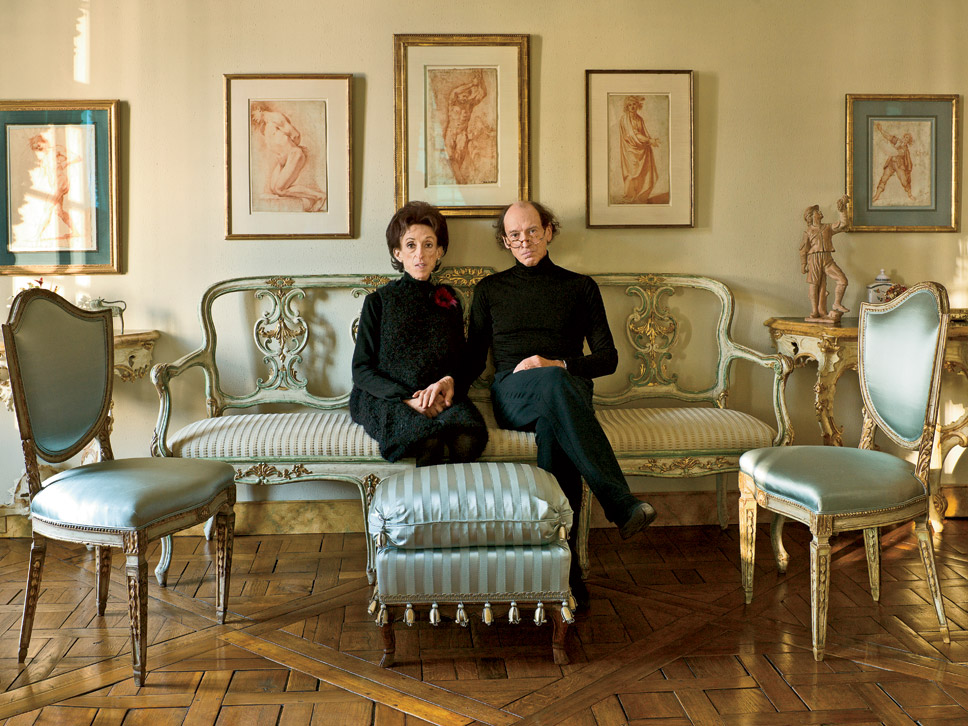 In November, the Art Institute of Chicago opened Strokes of Genius, an exhibition of Italian drawings from the collection of Chicagoans Jean and Steven Goldman. The Goldmans, formerly of Glencoe, are known for their extensive collection of Italian drawings, one of only three or four of this scale in private hands; these works on paper represent artistic studies for commissioned projects in Renaissance art, notably in Mannerism (the late Renaissance period and the early 16th century) and early Baroque art. It’s a short historical period, ranging from 1425 to 1650, but it encompasses an extraordinary range of styles, mediums, and functions. The Goldman Collection was previously shown at the Art Institute in 2008’s Drawn to Drawings—and it is the first time the museum has displayed a private collection more than once.

More than 80 pieces from the Goldman Collection are displayed in Strokes of Genius, 60 of which are new acquisitions. For their debut, these recent additions—among them masterpieces by the Carracci, Francesco Salviati, Pietro da Cortona, and other masters—are hung alongside notable related works from the museum’s prints and drawings collection.

Anne Vogt Fuller and Marion Titus Searle Chair and Curator of Prints and Drawings Suzanne McCullagh says that the exhibit was curated “with the collaboration of Jean Goldman.”

“Suzanne and I selected ones that spoke to the drawings we had acquired,” Jean says. “We thought it would be interesting for the public to see the range of drawings an artist would make.” In some cases, the Goldmans have acquired multiple studies for the same commissioned work, which allows viewers to gain a deeper understanding of an artist’s range.

While most exhibitions of this nature are hung chronologically, Jean wanted to try a different approach. Her career as an expert art historian and independent scholar, along with 20 years as an adjunct professor at the School of the Art Institute, feeds into her “mission in life, which is to make Renaissance art accessible.” And soStrokes of Genius presents drawings categorically, juxtaposed in a way that allows viewers to develop an intuitive understanding of an artist’s range: head studies, figures in motion, and composition studies.

“The wonderful thing is if you go in and see these studies of heads and one is naturalistic, one is abstracting and one is idealizing—you can see the kind of different ways you would draw a head,” Jean explains. “And same with the figures. Some figures in the 16th century were beautifully elongated and [some] were more naturalistic.”

“The layout of the exhibition shows how the approach to the study of the human form became codified in the academies later in the 16th century, with opportunities for studying the figure from life,” McCullagh adds.

Jean wrote two essays and co-authored the 90 entries in the exhibition catalog with Nicolas Schwed, an independent scholar and gallery owner living in Paris.

“We were a perfect match because I had certain skills that fill in the skills he has,” Jean says of the collaboration, which occurred almost entirely via email. “He can look at a drawing and attribute it, but he doesn’t have the context I do—in some ways, the drawings are a summation of my life’s work.”

McCullagh adds that the works on paper have long been “an area where discoveries can be made.”

Schwed and Jean spent nearly five years writing and researching the catalog, which has added significantly to the corpus of late Renaissance art history; Jean explains that “you never know who did a drawing—there’s no attribution. You have to determine it yourself. I’m like a detective: I look for clues,” though even after piecing together an attribution, it doesn’t always stick; as the field expands, attributions can become invalidated.

The Goldmans began collecting when Jean worked as the curator at the Institute of Contemporary Art, Boston: “We never considered ourselves collectors,” Jean says. “But over the years we bought this drawing and that drawing—somehow, without knowing it, you become a collector.” It’s an inextricable and vibrant element of their lives; the drawings, with few exceptions, normally hang from floor to ceiling in their home.

“It’s an amazing experience,” Jean says. “I was in the kitchen one evening and Steven yelled in, ‘Jeannie, come here immediately!’ I thought the living room was on fire or something. I come running in and he said, ‘have you looked at this drawing recently? It’s so beautiful.’ It’s that kind of thing.”

Strokes of Genius is on view in the Art Institute Galleries 124-127 through February 1, 2015. For more information, visit artic.edu.