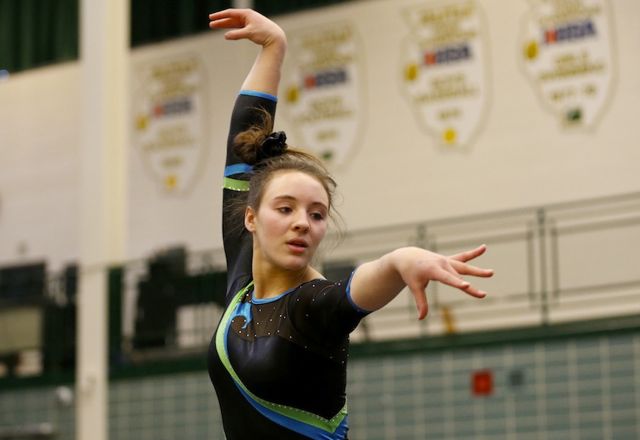 “She waltzed right in, doing her stuff,” Egerter says. “She did a couple of tumbling passes. ‘Wow, she is good,’ I thought. ‘I want to be her friend.’ ”

They’re friends now. Close friends. And seniors. Egerter typically precedes Stoddart on vault, on the balance beam and on floor exercise in the Trevians’ lineup.

Egerter’s friend/teammate was somewhere between disillusioned and miserable a few weeks ago.

“I had just come home from a practice, a couple of days before the Glenbrook North Invitational [held Dec. 13],” Stoddard recalls. “I wasn’t happy with how my season was going. I was shaky, nervous, so discouraged. I felt stressed. My head was all over the place. I broke down, right in front of my mom [Lee Anne].

“She told me, ‘Take a deep breath.’ Then my mom said, ‘I want to see that girl I remember seeing in the gym all those years ago, the little girl who liked to be goofy, the girl who thought it was OK to be ridiculous at times.’ ”

The day of the Glenbrook North Invite arrived. A Sam Stoddart performed in all four events. Shortly after she absolutely nailed her second tumbling pass on floor, an excited, super proud man in the stands started pumping his right arm. Repeatedly. It was Rich Stoddart, aka Daddy Stoddart.

“I’d heard he was excited,” Sam says. “I loved hearing that.”

And the balance beam.

And the uneven bars.

Daddy’s all grown-up girl won five gold medals in one day — with a happy-to-the-marrow, little-girl approach.

“I was light, airy, bubbly,” says the fourth-year varsity gymnast. “You’d think that’s counterintuitive in a sport like gymnastics, a sport that requires precision, a sport where inches matter, where every second counts. But it’s a mindset that works. I had to turn my mind off and trust that my body knows what it’s doing.

“Muscle memory … gymnasts have to rely on that and forget about thinking,” Stoddart adds.

It is Dec. 20, exactly a week after the Glenbrook North Invite. Sam Stoddart stands in her team’s home gym in Northfield, minutes before boarding a balance beam for another routine at another big meet. She is listening to a song only she can hear, nodding her head and mouthing the words inches from some of her teammates’ faces. She pushes her iPod’s ear buds in deeper, probably because all that nodding dislodged them slightly.

As the one in the best mood in the building returns to nodding, she starts tweaking the braids of a teammate. Stoddart then stops. A teammate is about to execute a beam routine. Time to be a vocal teammate. Time to put the blinders on, do everything she can to spur a Trevian, to “talk-cheer,” as Stoddart likes to say.

The routine ends. It is Stoddard’s turn. Stoddard de-ears her ear buds, gets focused, climbs the beam, earns a sixth-place 9.175 — good, not great, for an elite gymnast. No matter. Floor exercise is next. One of her duties, before hitting the mat for her floor show, is to make sure her teammates are ready for their floor shows.

Junior Ana Dabrowski — third in New Trier’s floor lineup, before Egerter and Stoddart — poses on the floor mat, awaiting the start of her music. A voice shouts, “You’ve got this, Ana! Come on, Ana, you’ve got this!”

The voice belongs to Stoddart. Stoddart sways to her left, sways to her right. She is a legitimate threat to dance, because she’s listening once again to sounds from her iPod. Maybe it’s Fountains of Wayne’s “Stacy’s Mom,” maybe it’s another catchy tune. Stoddart sips liquid from a bottle. Multitasking at a meet. Once again.

“Sam,” New Trier gymnastics coach Jennifer Pistorius says, “is always about the team. Even when she was winning all those events at Glenbrook North, she had the team — her teammates — on her mind.

“I’ve known her since she was little. Sam was kind of squirrely when she was young, always happy, always smiling, always bouncing around. Coaches noticed that. Coaches also knew how much talent she has. Full of talent … that’s Sam. This is her year to shine, and that’s what she’s doing.”

Last season, at the state meet, Sam Stoddart landed on a mat head-first on her second vault. She was fine, thankfully. Her score? Not so fine.

It did tie the character John “Bluto” Blutarsky’s mid-term grade-point average in the movie “Animal House.”

After recovering from the initial shock of the score and receiving consoling hugs galore from her teammates, Stoddart had very little time to feel sorry for herself. She had about 10 minutes to prepare for the uneven bars. She swung to a steely, inspiring 9.4. It ranked fifth among all qualifiers in the preliminary session.

Stoddart ended up seventh (9.375) on bars in the next day’s finals session.

She wrote all about the 0.0 and her response to it for her college essay. She has applied to 10 schools. Bowling Green State University, Michigan State and the University of Denver accepted her.

Stoddart looks back at that day at state … and smiles. Adversity tried to trip her.

“I never thought I’d get any value from a 0.0 score,” she says. “But I did that time. I found out that I’m resilient, that I can put something like that behind me and focus on what I have to do next.”

Sports psychology intrigues her. So does public speaking.

That day is here.

Notable: New Trier finished third (season-high 142.35 points) at its Holiday Gymnastics Invitational on Dec. 20. Stoddart took runner-up honors in the all-around (36.9) and topped the bars field (9.4). She also silvered on floor (9.625). Trevians junior Taylor Kwok (ninth in the all-around, 35.3) placed fourth on vault (9.35). Pistorius also received sturdy efforts from junior Peyton Burns (sixth place, bars, 9.05) and Egerter (seventh, beam, 9.15). … NT senior Sara Hummel scored a sharp 8.6 on beam — from the lead-off slot. “Huge,” Pistorius said. “That was a huge score. That’s why we have her leading off for us.”