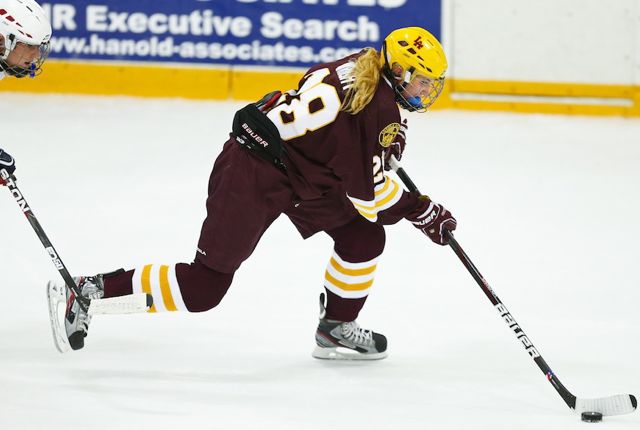 The junior center, an alternate captain, has 12 points (four goals, eight assists) in 10 games for a 10-1-2 hockey club. A severe bout with mononucleosis kept her off blades for three games. She works at Wilmette Bike and Sport Shop — “I’m a behind-the-desk girl,” she says — and plays fiercely graceful hockey, if there’s such a thing. Last week she gave her stick a rest in order to take finals.

The week before that?

“I don’t want her to ever feel she’s alone,” Wright says. “She’s tough, strong. She’s like a sister to me.”

Wright’s mother, Grace, looks at Emma and shakes her head. That’s what people in awe of others tend to do. Her teenager — the youngest of four Wright children — isn’t acting her age.

“I squeaked a lot back then,” she says, her huge smile forcing her eyes to squint. “My friends started calling me that. They called me that for about three years.”

Wright, former mouse, turned into a rink rat and skated for the Ramblers’ state runner-up team last winter. One of her big influences on that squad was current Cornell University freshman Erin O’Connor, a defenseman, an all-stater and a Blackhawk Alumni All-Star Team member in 2013-14.

“Hockey,” she adds, “I love it. There’s something about skating. Skating … it’s so different compared to running. I love going fast on the ice. It’s cold out there. It feels good out there.”

The girl with the heavy heart continues to play heavy minutes for Loyola Academy, which lost for the first time this winter on Dec. 21. Evanston edged LA 4-3 at the Robert Crown Ice Arena in Evanston.

“Emma plays every other shift for a reason,” Ramblers coach Conor Sedam says. “Her energy. She’s very passionate about the team. And Loyola is her only team; she’s not a double-roster player. That shows in her work ethic. She works extremely hard every shift. She’s fast, has long strides, has a good reach. Her hands — Emma works hard on that part of her game at every practice. That part of her game has really improved the last two years.”

Minutes following a recent game, Loyola Academy wing Valerie Caldwell emerges from a locker room. She finds out she gets to talk about Wright. Caldwell beams. Caldwell then gets delightfully loud and animated as she discusses what has to be one of her favorite topics in the world.

“Emma? Oh, she’s always happy, always smiling,” says Caldwell, who scored two goals, including a crafty unassisted tally in the third period, in the loss to Evanston. “Great player, great person. She knows where every one is on the ice. Always. She gets the puck to you. She’s always working hard, always wants to get better.”

Caldwell takes a breath. There’s more. Caldwell wants to recall Wright’s go-ahead goal in the Fenwick game, a Loyola win. The puck entered the goal through the five hole.

The runt of the Wright bunch does not come across as a runt. And not just because she would look perfectly normal playing power forward for a basketball team. Or as a powerful outside hitter for a volleyball team. Or as a relentless midfielder for a soccer team.