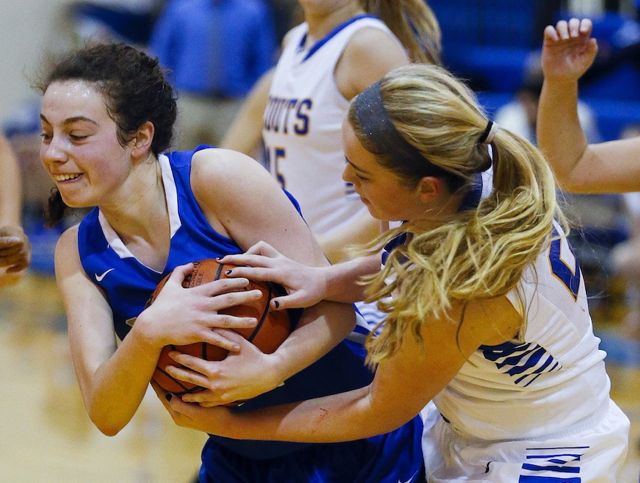 Two years ago, as a freshman PE student at Highland Park High School, Dahlia Cohen tried hard. In everything. It was her thing. It still is.

She even turned it into a two-word adjective.

“Yes, I was one of those ‘try-hard’ kids,” says Cohen, now a 5-foot-7 junior guard for the school’s varsity girls basketball team. “For the mile run in class, I ran hard. I tried hard. It didn’t matter what we were doing, what we had to do.”

“First and foremost, Dahlia is an extremely hard worker in everything she does,” Bechtel says. “Outside of practice, she puts the time in to get better. Works hard on her shooting. She saw she’d have a bigger role for our team this season, so she made sure did whatever she could to make sure she was ready. Dahlia loves the game, loves her team. She’s really committed to Highland Park High School basketball.”

“Before my sophomore year, I worked hard on my shot, my form, everything,” says Cohen, averaging 10 points, 3.5 rebounds and nearly two assists for the 0-12 Giants. “I love to shoot. Before this season, I played a lot of AAU basketball [for the Chicago Gauchos], starting in the spring and going all the way through the summer.

“I also worked on my ball handling.”

She did not need to work on her positive disposition. It has been one of her qualities for years, one of her go-to traits. Cohen struggled with her shot and sat for most of the fourth quarter in HP’s 55-48 loss to visiting Maine East on Dec. 19. But there she was on the bench, clapping for the positive things her teammates did, shouting encouraging words to her teammates. She kept her head up. And her spirits. Either Steve and Holly Cohen are raising their daughter wonderfully or Dahlia Cohen is allergic to negativity.

“In general, I like to have a positive attitude, even when I’m on the bench,” Cohen says. “If I’m sitting, I can still be supportive, right?”

You can tell a lot about a player after the player commits a turnover. After Cohen commits a turnover, she does not shoot a “You have got to be kidding” look a ref. She hustles back on defense, her shoulders slump-free.

“Dahlia never gets down on the court,” HP senior teammate Sydney Levenfeld says. “That’s a big part of her game, how positive she is. She also has a high basketball IQ. She sees the whole floor well. Really capable … she’s really capable as a player, and her role this year is a big one.”

Bechtel’s Giants headed to Orlando, Fla., earlier this week for three games in four days. Moments after a recent home game, Cohen’s eyes grow to the size of Mickey Mouse’s ears. Thoughts of the Magic Kingdom swirl. Cohen can’t wait to hit the rollercoaster circuit down there.

“I’ve been there,” she says. “I love the thrills of rollercoasters, of Space Mountain. We’re not just excited because of the basketball we’ll play down there. We’re also excited because it will be a great bonding experience for us.”

Well before Cohen cemented her try-hard reputation as a rookie high schooler, she tried her hand in circus acts. She juggled balls at a Fink Park camp in Highland Park. She rode a unicycle. No insert-head-in-wide-open-mouth-of-a-tiger act, though. That’s for fearless pros, not grade-schoolers.

Cohen has served as a counselor for the same circus camp for two years. Camp kids look up to her. Camp kids smile around her.

“It’s all about getting them ready for the show at the end of the camp,” she says. “It’s fun watching them, helping them.”

Especially when they try hard.

Notable: Visiting Maine East scored the first 10 points of its 55-48 defeat of HP on Dec. 19. HP tallied the next 12, beginning with a Levenfeld free throw at 1:52 of the first quarter and ending with a Kiera Thorpe bucket at 6:26 of the second frame. The hosts owned a 43-39 lead midway through the fourth quarter, before Maine East produced another 10-0 run. Levenfeld scored a team-high 14 points. Thorpe (11 points) had a superb first half, netting 11 of the Giants’ 18 points to go with her three rebounds and three steals. HP senior post player Grace Quirk finished with 10 points and a team-best eight boards. Levenfeld came down with seven rebounds, one more than Thorpe’s total.