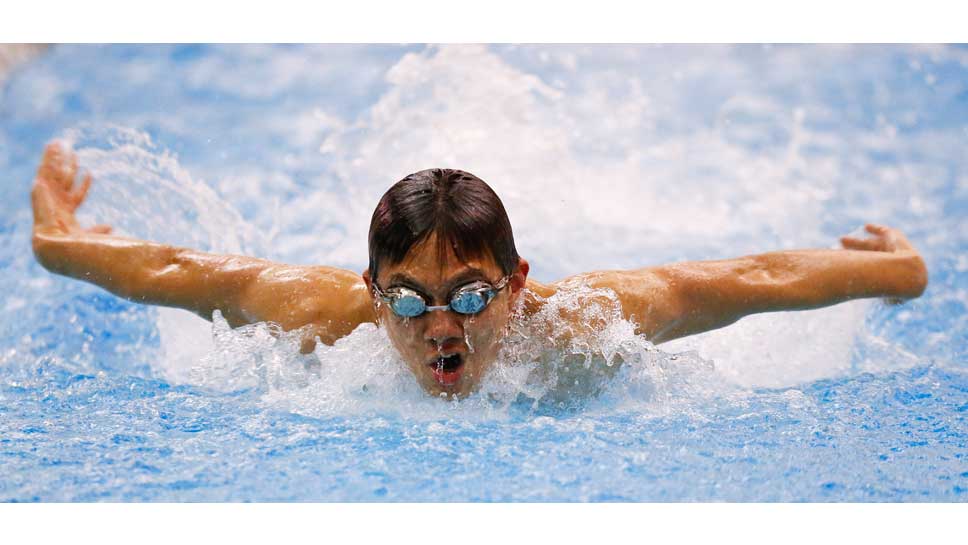 Joseph Park of the Titans competes in the 200 IM during a dual meet against Glenbrook North. Photography by Joel Lerner

“Me?” Dragman, rising from a chair, asked between events at the Glenbrook North Spartan Sprint Classic on Dec. 13. “You must be mistaken.”

No. Dragman was the story. Dragman was in demand this time. The 6-foot-2, 175-pounder had finished first in an event — from the slow heat. That was news, big news. And he did it in a breaststroke race. Also newsy, because Dragman is a sprint specialist.

“I found out my coach [Keith MacDonald] planned to make me race [the 50-yard breaststroke] earlier in the week,” said Dragman, a former breaststroker who is also a former football player and a former baseball player. (He competed in those sports his freshman and sophomore years). “I asked him, ‘Are you sure?’ ”

MacDonald was sure. But the coach did not exactly expect Dragman to clock a victorious 29.68 in the 50 breaststroke. Shortly after Dragman received his first-place medal atop the first-place podium (also a starting block), he looked down at a smiling MacDonald.

“Danny, I could tell, was surprised,” the coach said. “But that was neat, seeing him win that, seeing him get that medal. I was happy for him. He’s a really strong kid. He’s got a strong upper body. He bulls his way through the water.”

Dragman won another slow heat later in the meet, this time in his specialty. He touched in 10.85 in the 25 freestyle. Only the swimmer who swam in the fast heat swam faster than Dragman did.

Salomon needed only 9.94 seconds to complete the 25 yards.

Dragman also produced points as a relay man at the seven-team gathering, joining senior Steven Clare and juniors PJ Thoelecke and Tommy Hagerty for a runner-up time of 1:34.46 in the 200 free.

MacDonald’s Titans (158 points) captured the team title behind the strength of 13 first-place efforts. Many of the events were events that won’t be staged at the state meet. Many of the events had odd distances, like 25 yards in individual races, like 300 yards in the final freestyle relay. But swimmers and coaches enjoy the truncated tests. Swimming can get monotonous at times.

Many coaches coach because they get to coach pluggers. Dragman is a plugger, a team-first guy who would like nothing more than to be surrounded by teammates at the state meet. On deck. Maybe he’ll get there as a 50 free qualifier. Or as a 100 free qualifier. Maybe he’ll make it to state as a relay member.

“Our team this year … it’s amazing how everybody gets along, how everybody jokes around,” Dragman said. “We must be one of the weirdest teams in the state, the way we dance around in locker rooms.”

“Sam Iida,” Dragman says of the sophomore and sixth-place finisher at state (500 free) last winter. “It has to be Sam Iida.”

Iida cut quite a watery rug last weekend at the Sprint Classic in Northbrook, winning the 100 IM (53.62) and 50 backstroke (24.54) races and leading off for the victorious 200 medley relay (1:39.66, with anchor Salomon and juniors Peter Dales and Sam Salganik).

Dragman was asked about Salomon at the Sprint Classic. Dragman immediately grew animated, shook his head in awe, shifted slightly in his interview chair on deck. He could not wait to tout all about the future Badger.

“It’s so fun to have him for a teammate,” Dragman said. “He does whatever we need him to do, at any meet. I remember last year, at a meet like this, Jon swam in three races … three straight races. You know what he did? He won them all.”

The night before, Glenbrook South defeated visiting Glenbrook North 115-68. The Titans won 10 of the 12 events on Dec. 12.

Arshad Baxamusa, sporting a first-place medal, jumped off a starting block that had doubled as an award podium.

The Glenbrook North junior then removed the medal (attached to a ribbon) from his neck, hurriedly took off his warm-up top and shorts and handed all three items to a teammate.

Apparently a phone booth wasn’t available for the quick change at the Spartan Sprint Classic.

Super “Bax” had to get ready, pronto, for the next race — the 100 medley relay — after winning the 50 butterfly in 24.66. Baxamusa then helped the quartet place second in 48.42 (with Brendon Johnson, Ethan Schonfeld and Mark Schneider).

Schneider also clocked a runner-up time of 50.1 in the 100 free. Spartans junior Andrew Cooke silvered in diving (407.5 points) in the invite’s morning session.

ACT testing forced Sean Scarry to miss the Sprint Classic at Glenbrook North last weekend. The Deerfield senior had an answer for most of his challengers at the state meet a year ago, taking third in diving.

“It’s something different,” Deerfield coach John Sullivan said of the annual meet, which features races at unconventional distances. “The kids really like the 25-yard races.”