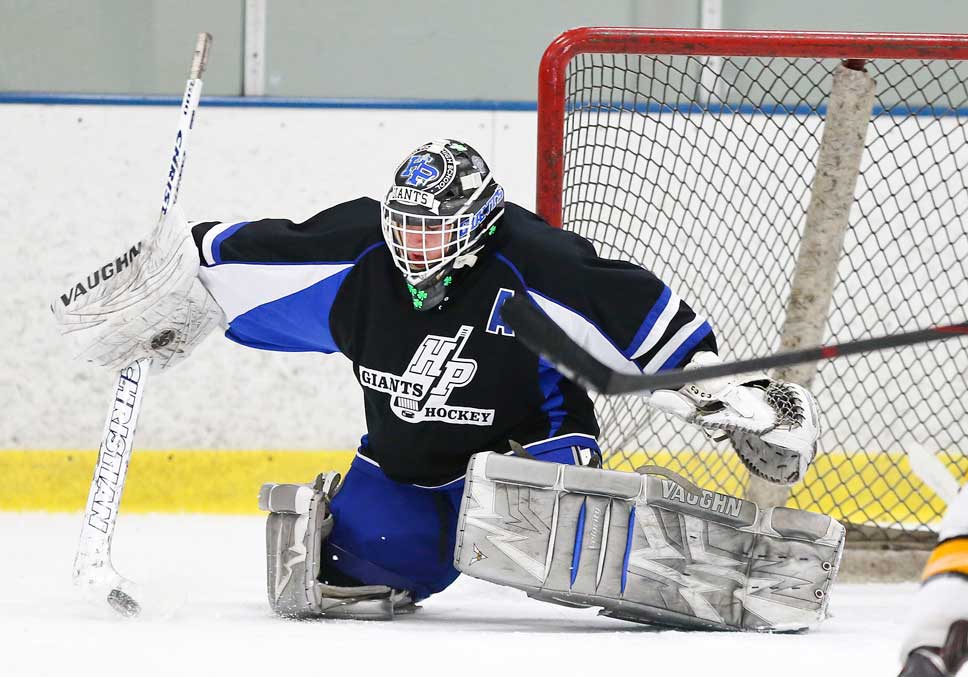 His goals against average is 1.31.

He has recorded five shutouts.

Liam McCann’s stats, all of them.

Perhaps you’re thinking: Giants coach Sean Freeman must have given McCann a couple of chances to suit up as a defenseman. Or a forward. Or a center.

McCann delivered each of the assists from his home on the ice, the goal crease (population: 1 masked, heavily padded boy].

“He’s not only very good at stopping shots,” Freeman says. “He’s also very good at handling the puck. Liam can pass. His passes, the ones that turned into assists … they were like Nolan Ryan fastballs.”

A baseball reference from a hockey coach. How fitting. McCann is a first-year Giants goalie after having played seven years of triple-A hockey. His last AAA team was Mission, based in Lisle. He ceased crease time for that organization in order to spend more time on baseball — the sport he wants to play in college. But the middle infielder is not thinking about gloving grounders and nailing base runners these winter days and nights.

Gloving pucks with his left glove and backhanding three-quarters-of-the-rink assists with his right arm are on his mind. The right-handed McCann bats lefty, meaning the one-handed stroke he uses with a hockey stick is a smooth one, a familiar one.

“There is not much of a drop-off from triple-A hockey to high school hockey,” the 5-foot-9, 180-pound McCann says. “The pace, the skill … they’re similar. I’m enjoying this. Highland Park Giants hockey, it’s been very good for years. I will do whatever I can do to help the team.”

What he did late in the third period of HP’s 5-1 defeat of visiting Maine on Dec. 14 had to be seen to be believed, to be appreciated. Shortly after the Giants survived Maine’s 5-on-3 advantage, McCann made save after save after save, with two of them coming while he had a seat on the ice. He stood on his head, too, during the barrage. Figuratively. He tilted right, tilted left. He almost could have passed for a human windmill, denying Maine’s laser shots from a variety angles in the game’s most gripping sequence.

The victory improved HP’s record to 23-7-2, 11-0 in the North-Central Division of the Illinois High School Hockey League’s Champions Conference.

“Liam is incredibly skilled,” Giants junior forward Simon Zaslavsky says of the alternate captain. “Does things out there that make your jaw drop. He’s also an unbelievable leader, a great role model. The first day Liam walked into our locker room, I knew he’d be a great leader for us. I knew he’d be captain material. I knew that because of the way he talks, the way he carries himself.”

Brendan McCann is 26 years old and a senior financial analyst for a major insurance company.

“My brother,” Liam says, “always wanted a little brother. I would not be the athlete I am today had I not been able to grow up with him around. So many times we’d be in our yard, playing catch or working on ground balls. Being together … he helped me, encouraged me, influenced me, taught me the importance of leadership in sports.

“My father and my mother, they gave me great advice. They told me to never be afraid to be a positive influence no matter what I’m doing, no matter which sport I’m playing.”

Before games, at the edge of a rink, McCann likes to stand near an entry/exit gate, with his right hand up. Teammates, one by one, tap McCann’s right glove before skating to a spot for the start of the warm-up session. The gate closes. McCann glides to a crease.

Notable: McCann finished with 24 saves in the 5-1 home win over Maine at Centennial Ice Arena on Dec. 13. Giants forward David Shapiro scored two goals and assisted on another. Andrew Krug, Gavin Proeh (assist) and Garrett Collopy tallied HP’s other goals. Other assists came from Dylan Abt and Kieran Jagadeesh. … Shapiro had a monster game on Dec. 14, netting three goals and providing three assists in a 6-2 defeat of Crystal Lake South at Leafs Ice Centre in West Dundee. Jagadeesh finished with two goals and two assists. Proeh found the net once and dished an assist. Krug and Jason Block each contributed an assist. The win was HP’s 13th in 15 games and improved its overall record to 24-7-2, 12-0 in the North-Central division of the IHSHL Champions Conference.