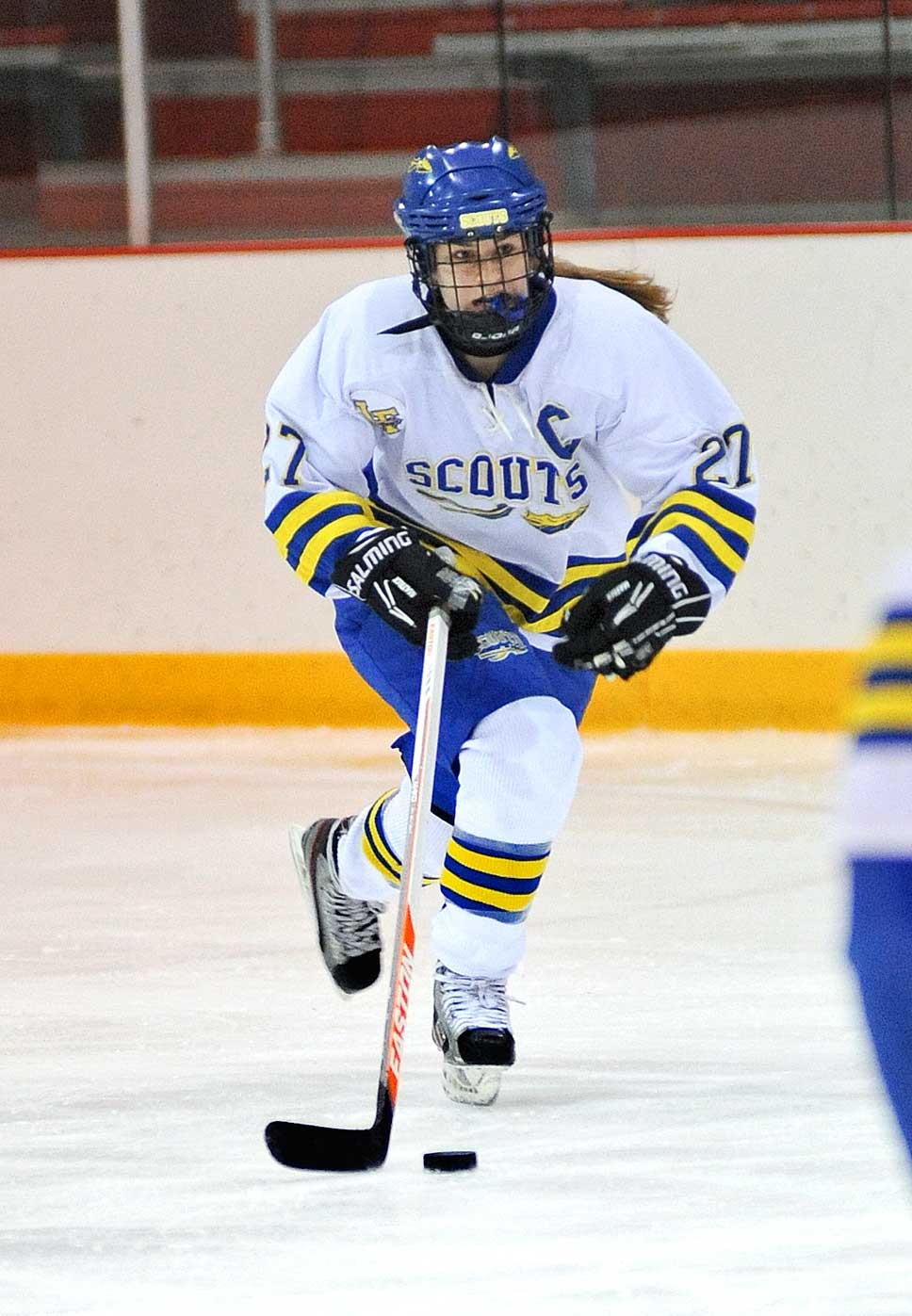 Mary Claire Newtown, with a puck at her stick, is skating, weaving, zipping effortlessly past and around other hockey players. It almost seems unfair. The Lake Forest High School senior defenseman is going all NASCAR on ice, while practically everybody else is riding along on a second-hand lawn mower, stuck in first gear.

Newtown is 17 years old, stands 5-foot-7. She must have mastered the art of skating well before figuring out what to do with a sippy cup.

“When I’m here [at Lake Forest College’s rink, the Scouts’ home icebox], my mind is off everything else,” Newtown admits. “Hockey … it’s a great stress reliever. My whole family is a hockey family. My dad [John] played at Clarkson University [N.Y.] My brother, Jack, plays club hockey at Dayton. I have a cousin who’s on the Boston Bruins’ farm team. When I was younger, I remember saying to him, ‘Wow, you’re almost a pro.’ That was so cool.”

Newtown was named captain before the start of the 2014-15 season. She thought that was so cool, too. Maybe the “C” on her jersey stands for “captain” and “cool”. The designation means she will have a say in the selection of the next two captains, per the program’s tradition. She does not take the responsibility lightly.

She is already making mental notes.

“I’ve got my eye on people,” Newtown says, breaking into a blue-line-wide smile following a 1-1 tie with visiting Latin School on Dec. 9.

Soon after Latin knotted the score at the 5:36 mark of the third period, Newtown glided toward Scouts goaltender Corynn Salazar, a sophomore at Stevenson High School. Newtown stopped inches from her teammate, eager to ask a question.

“Did I screen you?” the concerned captain queried.

Newtown then delivered the same advice she has been giving herself since the start of her final prep season on skates.

“I told her, ‘Don’t let it get into your head,’ ” Newtown recalls. “I let that happen to me too often last year, when I went up against great players, fast players. Some players, they scared me to death. I don’t let things like that get into my head anymore.”

Through Lake Forest’s 2-1 defeat of Fenwick on Dec. 12, Newtown had scored six goals and assisted on two others for a 6-2-3 club. Two of her goals came in a 5-1 defeat of Warren on Oct. 21. But the numbers don’t define the player; Newtown’s skating ability and ice sense and Alps-high hockey IQ do. Against Latin last week, she briefly gloved a high-flying puck late in the third period. The puck dropped near her blades as she got in a position to wrist a pass.

In a second, the puck reached saucer status, flying above at least a pair of Latin Romans before landing at the stick of a wide-open Scout. Newtown would later label it a “rainbow” pass. LF did not score on the possession.

A clever Newtown, though, had given her team a sound chance to break a 1-1 tie.

“One of our smartest players,” Scouts coach Liz Zorn says of Newtown. “And she isn’t just a great player on defense; she’s also one of our better offensive players. She gets this look in her eye when she is alone and has the puck near our net. Mary Claire then takes a look [at me] as she skates up the ice. But I don’t have to tell her what to do. She puts her head down and skates, end to end.

“Sometimes,” the coach adds, “she shoots from the point, and sometimes she dekes, then shoots.”

Zorn is in her third season behind the Scouts’ bench. One of the first players she met before the start of her first season was Newtown. Newtown made the new coach feel welcome. Instantly.

“Very personable, very talkative,” Zorn says of her initial encounter with Newtown, only a sophomore at the time. “She showed me the ropes. Great kid, great leader. We love her leadership, her attitude, her energy.”

Scouts senior defenseman Alex Kazarian remembers hearing Newtown yell something on the ice one day. The something was … nothing.

“She just felt like yelling,” Kazarian recalls. “No words. That’s Mary Claire. That’s Mary Claire having fun. She is a genuinely good person, which is hard to find. She’s nice to everybody. The freshmen — she talks to them, makes them feel good. But as soon as she hits the ice, she gets really serious.”

The TV series “Orange is the new Black” entertains her.

Blue and gold? Newtown wears those colors when the Scouts play hockey, when the players wearing the other set of colors on the ice attempt to keep up with her, when Newtown’s speed reduces her foes to virtual statues.

When Newton entertains her fans.