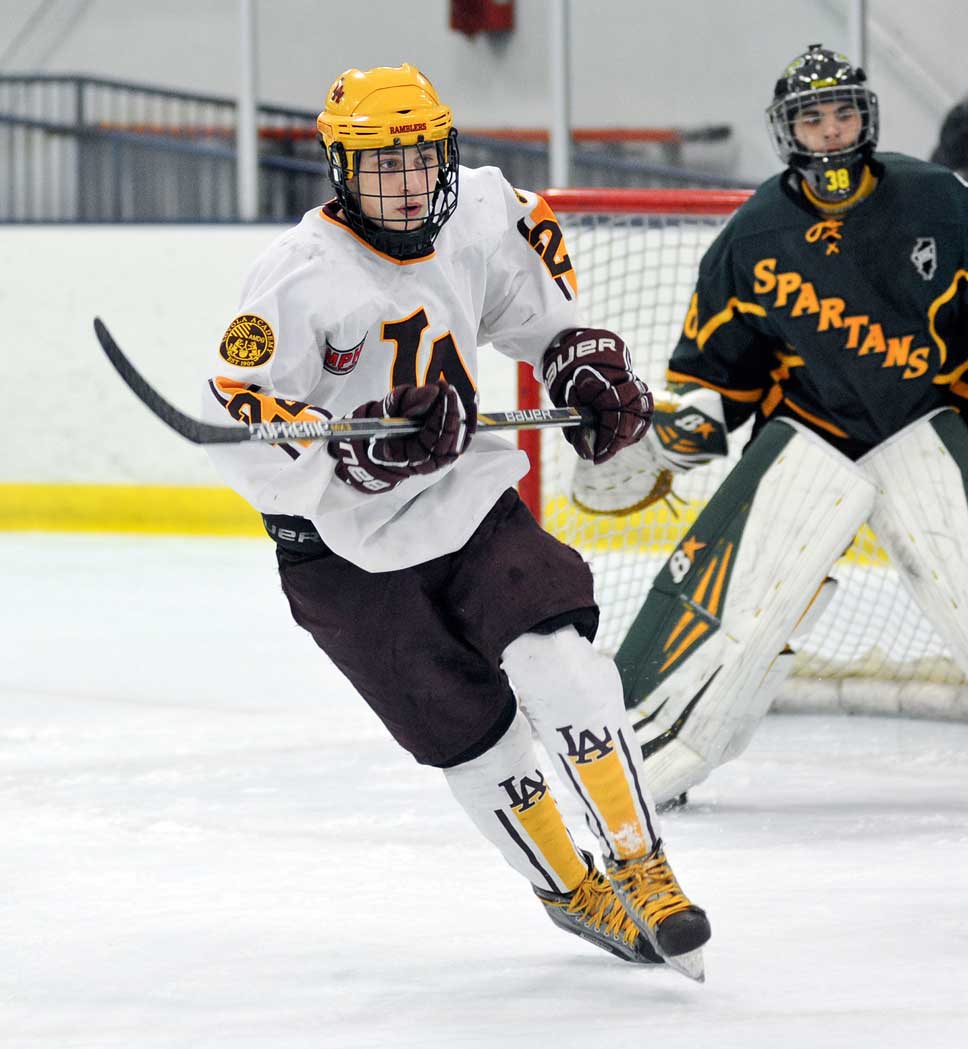 That’s especially late for the grandson of the late Jack O’Grady, the “O’Grady” in the annual Loyola Academy O’Grady Cup Thanksgiving hockey tournament in Wilmette.

Grandpa Jack served as a volunteer Loyola Academy Gold coach for decades. His son and Danny’s dad, Dan (LA Class of ’82), was a Loyola Gold puck boy before becoming a Loyola Gold center.

“When me moved back here [from Pennsylvania], I was interested in soccer, basketball, football. Not hockey,” recalls Danny, a Glenview resident. “But I became intrigued when my dad told me stories about his dad, when my dad told me hockey stories about my grandfather, a big sports guy after [World War II]. One day I went up to my dad and said, ‘I want to play hockey.’ ”

The rookie skater started where most start: in a house league. Danny O’Grady, son of a former puck boy, loved moving a puck, loved shooting a puck.

Stuck … on the puck sport.

Today? Danny O’Grady, a junior right wing, paces Loyola Gold (9-6, with one shootout loss, in the Scholastic Hockey League, through Dec. 15) in goals (nine) and points (14). The second-year first liner had a goal and an assist in a 5-0 defeat of Rockford at Heartland Ice Arena in Lincolnwood Dec. 12.

“Great kid, energy kid,” LA Gold coach DJ LaVarre says of O’Grady, a sophomore on a line with two seniors last winter. “He’s a meat-and-potatoes player, no flash. You look at him on the ice and you think, ‘OK, that kid works hard.’ He gets it. He gets Loyola Academy hockey, understands what we’re all about.”

O’Grady began the 2013-14 season as a fourth-line winger. One day, suddenly, he found himself skating with Gold’s first line. One of his advocates behind the promotion was John LaVarre, DJ’s brother and a Loyola Gold assistant coach.

After the elevation, O’Grady’s play on the ice slipped. John Lavarre noticed it. O’Grady felt it.

“I hit a valley,” O’Grady recalls. “I had a talk with John. John continued to support me, continued to encourage me. I look up to him. He has been a big influence. He gave me my edge as a player.”

Hello, peak … one of O’Grady’s peaks.

Graduation 2014 wasn’t kind to Loyola Gold. One of the last year’s seniors, forward Axel Lifvendahl, hummed atop the ice. He also was instrumental in selecting the music in Gold’s locker room after games, a job O’Grady holds this winter.

O’Grady’s style atop blades is part blue collar, part no-nonsense. And all relentlessness.

“I am not a player who’s known for his hands, his dangles,” he says. “I like to get deep [in the opponent’s zone], crash the net, put the puck in. I’m a garbage man.”