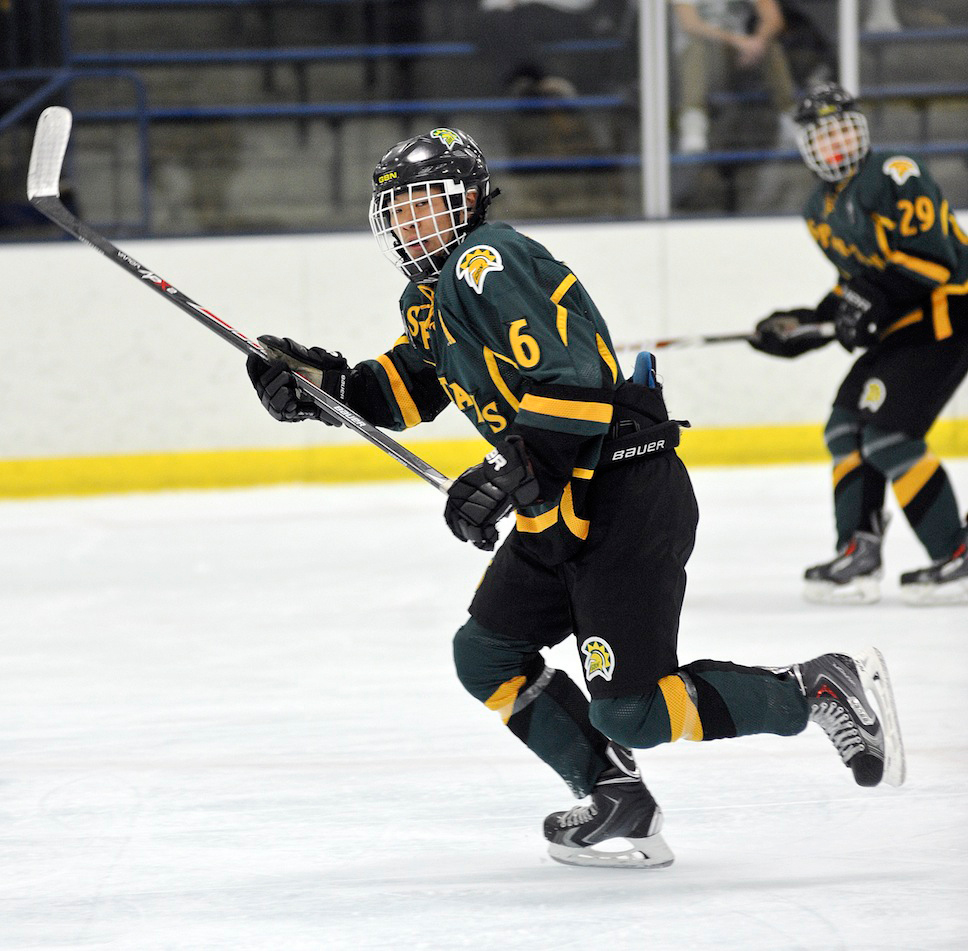 It might be the smallest trophy. Ever. Glenbrook North senior forward Chris Zhang received it at the Spartans’ hockey banquet two years ago.

The hardware is smaller than a jar of peanut butter and slightly taller than a toy soldier.

“It’s about this big,” Glenbrook North hockey coach Evan Poulakidas says, extending one index finger over his other, three inches apart. “It was for being named ‘Best Practice Player.’ The seniors gave it to him. It was such a small thing. Everybody cracked up. But it showed how much respect the seniors had for Chris.”

Zhang still practices hard. He knows no other way. In games he plays hard, passes precisely, scores often. Four of Glenbrook North’s goals in a 6-1 win at a tournament in Indiana last weekend came off his stick. Zing, zing, zing, zing.

Zhang, an alternate captain, assisted on another.

“Best player in the state,” Spartans senior forward Alex Merritt says of the player with team highs of 31 goals and 42 assists in 45 games. “Chris is a smart guy, a smart player, with a high hockey IQ. High regular IQ, too. His balance … he has the best balance. He also has the best puck control. I also think he’s underrated on defense; he’s great on our penalty kill.”

Zhang and Merritt play on the Spartans’ first line, their third season as line mates. They skated as second-line cohorts for last winter’s state runner-up squad. Each would know where the other is on the ice at all times, even if both were blindfolded and told not to say a word. In North’s 2-0 defeat of visiting Loyola Academy on Dec. 10, Merritt scored the first goal, Zhang the second.

Zhang (and Logan Nein) assisted on the first goal, Merritt on the second.

“Chris makes my life easy in games,” adds Merritt, second among Spartans in points (69 — 30 goals, 39 assists), through Dec. 15. “That give-and-go goal [Merritt’s goal vs. LA Gold] on a 3-on-2 was identical to a goal we scored in practice [the day before]. We were laughing on the bench after that goal. We had to laugh; we couldn’t believe it. Identical … those goals were identical.”

Zhang speaks softly and wields a potent stick for a 37-8-2 team (8-2 in the Scholastic Hockey League, through Dec. 15). He thinks the world of his parents, Tong and Jenny, and points to them as his top two inspirations. Their love for hockey grew with Chris’ love for the sport. Their son started taking hockey seriously at the age of seven. Their son skates at least five times a week at North Shore Ice Arena in Northbrook — during the summers.

“They’ve always been supportive, and I’ve always loved going to a rink,” says Zhang, who, as a sophomore, slid an assist in Glenbrook North’s loss to New Trier Green in the 2013 state championship game at the United Center, the Chicago Blackhawks’ home rink. “If I have a bad game, though, they’ll let me know it at home. My dad has asked me after games, ‘How do you think you played?’ I’ve told him, ‘Not great.’ He would then say, ‘Yep.’ ”

Maybe they would then exchange smiles. Maybe Chris Zhang would then appreciate his father’s honesty and start counting the hours — minutes? … seconds? — until the club’s next game, when he’d get the opportunities to slap the “Not” in “Not great.”

Zhang wears a jersey top with an “A” on it for a number of reasons. Perhaps 26, for the number of letters in the alphabet. Two of them: speed on the ice, Spartans pride off the ice.

When he sits still or walks around on surfaces other than icy ones, Zhang is very stable, very committed to his team.

With a plus-minus rating of infinity.

“Chris is quiet, but he cares about the team,” Merritt says. “I see that care in the locker room. We all see it.”

Notable: Glenbrook North lost 5-4 to two-time reigning state champion New Trier Green in the Cornfield Cup final at Henderson Ice Arena at Culver (Ind.) Academy on Dec. 14. Zhang scored twice and assisted on a Chad Yale goal. Merritt struck the Spartans’ other goal. Yale, Nein and Jake Rabin each finished with an assist. … GBN goaltender Brett Zera made 16 saves in a 2-0 defeat of Carmel in a Cornfield Cup contest on Dec. 13, three days after stopping 16 shots in the Spartans’ 2-0 decision over visiting LA Gold. … Other significant efforts from Glenbrook North at Culver, where the Spartans went 3-1: Zera (31 saves in a 6-1 defeat of St. Ignatius on Dec. 12); Merritt (four assists vs. St. Ignatius); Nein (one goal, three assists vs. St. Ignatius); Alex Crane (two goals); Kyle Slovis (one goal, two assists); and Yale (two goals, one assist). Ari Kamensky tallied the Spartans’ second goal in their shutout of Carmel. … Three goaltenders have combined for nine shutouts for GBN: Zera (six), Garrett Cohen (two) and Alex Cacioppo (one). Zera (17-2) has a team-best goals against average of 1.3 and ranks first among teammates in save percentage (.924). Cohen’s GAA is 1.7. … Zhang leads his team in plus-minus rating (64), followed by Slovis (57) and Merritt (55).