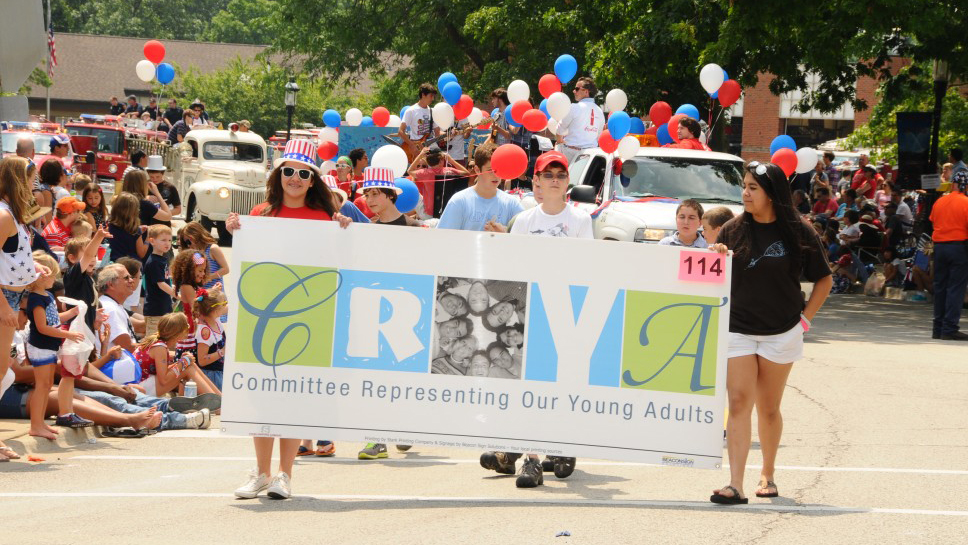 CROYA in a previous parade

Summer days and nights, patriotic tunes, red, white and blue: These are a few of our favorite things. With fewer than 200 days to the 2015 Fourth of July Parade, the Lake Bluff Fourth of July Parade Committee is pleased to announce the 2015 Parade theme and Marshal: “Independence Rocks” has been selected as the 2015 theme, and CROYA has agreed to serve as Parade Marshal.

The 2015 theme—Independence Rocks—pays homage to groovy, music-filled Lake Bluff summer days. From popular concerts in the park and local bands strumming at block parties to music on the green during the farmer’s market, music plays a big role in Lake Bluff life. And music plays a starring role in the parade. On average, there are eight to 13 different bands marching in the parade each year and many other floats incorporate everything from rock n’ roll to classical music into their entries.

“The Committee loved the idea of celebrating the youthful vibrancy of music and what it brings to our community,” said Committee President Deb Dintruff, “while staying true to what the day is about: the independence of our great nation.”

Given the music-centric theme, the Parade Committee felt CROYA, the Committee Representing our Young Adults, would be a perfect fit as Marshal. CROYA provides local teens a safe place to gather with friends both after school and on weekend evenings. CROYA is home to Activator Music Academy, which began teaching music lessons in the basement in 2007 and has coordinated hundreds of music programs for CROYA, including running sound for the Parade.

“When I heard the news that CROYA was chosen as the 2015 Lake Bluff 4th of July Parade Marshals, I was ecstatic,” said CROYA Manager Todd Nahigian. “I couldn’t wait to tell the youth and staff! This is a great expression on the part of the Parade Committee as to how important the next generation is to our communities. This year marks the 35th year of CROYA empowering the youth of Lake Bluff and Lake Forest. I can’t think of a better way to celebrate the youth and the support the community has given CROYA over three-and-a-half decades. Music is such a huge influence in the lives of teenagers and is one of the greatest ways CROYA connects with youth. The entire CROYA organization is honored to accept the nomination to be the 2015 Parade Marshals.”

The Lake Bluff Fourth of July Parade Committee, a non-profit organization, sponsors the annual Lake Bluff Fourth of July Parade, with assistance from American Legion Post 510. The 15-member volunteer Committee begins the process of fundraising and organizing the parade each September. The Parade is entirely funded by the generous donations and sponsorships of families and local businesses. The Parade, now marching into its 105th year, is grateful for the community’s support. Visit www.LB4July.org to learn more.

To learn more about the Lake Bluff Fourth of July Committee or how to support the Parade, visit www.LB4July.org.