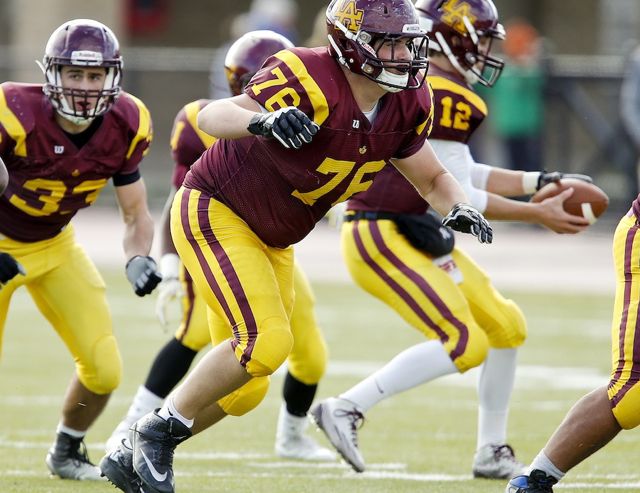 Charlie Murray (No. 76) lines up at right tackle for the Loyola Academy football team. Photography by Joel Lerner

Charlie Murray settles his 6-foot-5, 290-pound frame on a chair and revisits his past — back when he was a fourth-grade running back during an intramural season of five football games.

“I think I got tackled twice all season,” a nostalgic Murray says, curling a grin. “Halfback. Yes, I was a halfback, a fast one. I returned kickoffs for touchdowns.

Murray’s days as a Loyola Academy right tackle ended cruelly a week before the Ramblers would beat Curie’s Condors 14-7 in the Prep Bowl at Soldier Field to cap an 11-3 season last month. The senior and Wilmette resident had twisted his left kneecap awkwardly in a Catholic League semifinal against Brother Rice on Nov. 22. A doctor advised Murray he would risk having to undergo knee surgery if he were to play in the Prep Bowl.

It was advice he did not want to hear. But he heeded it because he wants to play in a season opener for a college football team next fall. Murray had suffered a broken right hand in the third quarter of a Class 8A playoff loss to Stevenson on Nov. 8, kept it his little secret and continued to play. He weighed slightly more than 290 pounds in a Catholic League playoff game against St. Rita the following weekend, thanks to the cast he had to wear.

Loyola Academy senior lineman Nick Cassier lined up at right tackle instead of Murray at Soldier Field on Nov. 29. Days before the game, Murray and Cassier had a conversation.

In between his final intramural run and the first day he put on a Ramblers football uniform, Murray — a graduate of the School of Saints Faith, Hope & Charity in Winnetka — attended Loyola Academy football games. The atmosphere, awash in maroon, at each game gripped him.

“I loved going to those games. I went to a bunch of them,” recalls Murray, one of five sons of Bob and Barbara. “The state semi, against Maine South … you don’t forget an experience like that.”

One of his two older brothers, 6-5, 305-pound James, started as a sophomore right tackle at the College of the Holy Cross (Mass.) and blocked for ex-LA quarterback Peter Pujals this fall. Charlie watched film of James’ games. Being an offensive lineman, Charlie did not watch the ball.

He watched the big boys in the trenches. Closely. He watched James. Very closely.

“I called James up and gave him some pointers during his season,” Charlie Murray says, as another grin appears. “He didn’t become an offensive lineman until his junior year at Loyola. I was a lineman way before that, right after my days as an intramural player. But James … he also gave me pointers.”

Charlie’s other brothers are Bo, a student at the University of St. Thomas in Minnesota and a former hockey and baseball player at Loyola Academy; Patrick, a freshman linebacker at LA; and Sean, a sixth-grader and budding offensive and defensive lineman.

Their father, Bob, is a Fenwick graduate. One of their uncles, Jamie Baisley (Loyola Academy, ’93), played linebacker for the Jacksonville Jaguars of the NFL, the Chicago Enforcers of the now-defunct XFL and the Rhein Fire of now-defunct NFL Europe.

Charlie Murray started two games and played on the field-goal unit for Loyola’s Class 8A state runner-up squad last fall. He stood 6-2 and weighed 260 in 2013.

“It was a nice varsity experience,” an appreciative Murray says.

Murray was not very nice to defensive linemen in 2014, creating ample corridors for the Ramblers’ rushing attack and helping the team’s trio of quarterbacks extend plays with his pass-blocking.

“He has a strong punch, and for a big man he moves his feet swiftly,” Ramblers football coach John Holecek says. “He should have a good chance of playing college football.”

Holy Cross, Butler, Fordham and Colgate interest Murray, who expects to make his college decision in February or March. In the meantime he’ll heal, study, work out. And make people of all ages laugh — a strength that shows no signs of atrophying anytime soon.

“I like being able to do that,” he says. “My sense of humor, you could say, is a little dry. I’m always thinking of new ways to make people laugh. I like improv, and I’ve taken a couple of theater classes. Honors Theater II, I really loved, took it with [former LA quarterback Jack Penn]. We acted in a school play together.

“A focus of the play,” Murray adds, “was a family’s dynamic. I was at the head of the dinner table in a scene.”

The number of cousins in his family could easily pass for the population of a small, incorporated village. Every once in a while Murray and some of his relatives like to get together to play a math game. The one rule: no calculators.

“It’s called a ‘formal cousin count,’ ” Murray says. “We sit around and count up all the cousins on both sides of the family. It takes about 20 minutes. The number right now is at about 60 cousins, I believe.”

Bobby Walker first met Murray at a Loyola football practice in the summer of 2011, before their freshman season. Two things about Murray struck Walker, a tight end, back then: Murray’s charisma and Murray’s ability to flatten very good players.

“It’s impressive to see a player his size move around and move people,” Walker says. “He’s a huge guy. In [the second week of the 2014, versus Edwardsville, in a 29-28 overtime win], Charlie went up against one of the top prospects in the country and dominated him … dominated on three, four straight plays.

“But he’s not just a great lineman and great teammate,” Walker adds. “He’s one of the funniest kids, kind of a goofball. Charlie likes to impersonate voices, likes to run around and be crazy. He’s been my best friend since freshman year.”

“That was helpful, having them around my freshman year, knowing I could stop in, see them, maybe ask to borrow some money at times,” Murray recollects.

What’s priceless to Murray is the value of examples sets by his grandparents on both sides of the family.

“All of them believe family comes first … always comes first,” Murray says. “They’re the best. They’ve been inspirational to me. My grandpa [Jim Baisley] is a war vet, 81 years old, a smart man. He’s retired, but he’s never been busier in his life than he is now. He helps raise money for war vets.”

Athletic, entertaining, respectful, fun to be around, serious, grateful — some of Murray’s qualities, at the age of 18. The former hard-to-tackle halfback with the easy smile will certainly miss suiting up and turning serious for Saturday afternoon home football games at Loyola Academy. The current right tackle with the easy smile also will never forget how he developed on days other than Game Days.

“And I can’t wait to come back next year to watch and support Loyola Academy football. I will always follow the football program.”