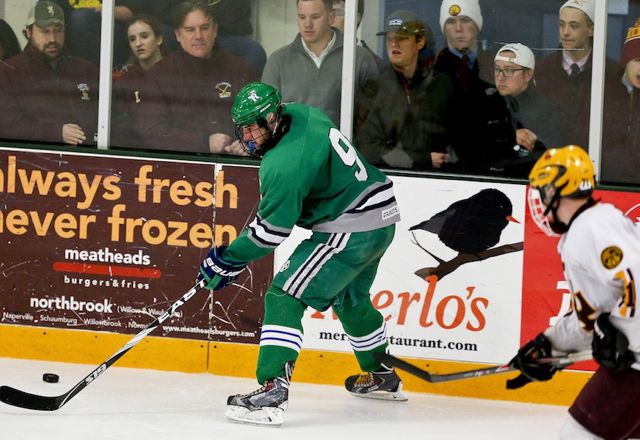 New Trier Green’s Brett Segvich (No. 9) has 22 goals and 14 assists in 34 games this season. Photography by Joel Lerner

Who is Brent Segvich?

A huge fan of The Who, that’s who. And Led Zeppelin. And The Rolling Stones. And Boston. And Styx. And (name any classic rock band and watch Segvich’s face light up).

“My dad [Sam] got me interested in that kind of music when I was little,” says the senior hockey forward and New Trier Green’s leader in points (36 — 22 goals, 14 assists). “The Who album, Who’s Next [released in 1971] … great album. Fourth through sixth grade I attended a rock and roll camp in Niles. ‘Pinball Wizard,’ I remember hearing that Who song right around that time. Great song.”

It is minutes after NT Green’s 5-2 loss to Barrington at the North Shore Ice Arena in Northbrook on Dec. 7. The 5-foot-11, 190-pound Segvich is one of the first players to emerge from Green’s locker room. He took the loss hard, like his teammates did, but he has perspective — “Good reality check for us,” he says — and plenty of energy left to share his fervid passion for music and report that his top two preset buttons are set to classic rock stations The Loop (97.9 FM) and The Drive (97.1 FM).

Hockey stirs Segvich, too. His dad taught him how to skate at Watts Ice Center in Segvich’s hometown of Glencoe. High on Sam Segvich’s list of requirements before settling on a home on the North Shore was the proximity of an ice rink. Brent was three years old when he took his first lesson, a tyke atop blades who would eventually want to fly atop ice and shoot one-timers just like Brett Hull — the NHL equivalent of The Who’s Roger Daltry, in Segvich’s world.

Segvich played Chicago Young Americans (CYA) hockey from the seventh grade through his freshman year. He was an eighth-grader when he watched New Trier Green win a state championship at the United Center. Everything about the game thrilled him. The sounds. The visuals. The sea of fans. The victory. The sounds and the visuals after the victory.

“I saw the fans, I felt the excitement, and I knew I wanted to play for New Trier Green someday, play with and for my friends,” Segvich says.

Segvich stopped playing CYA before his sophomore year, in 2012. It allowed him to lace his skates up for his first New Trier game. A year later, he ranked second among teammates in goals (36) to 2014 NTHS graduate Matt Solberg (38) after Green (37-9-1) captured its 12th state title in program history and 10th in 17 years.

“Not once have I ever regretted leaving CYA hockey,” Segvich says.

If a hard-hitting linebacker wore skates and pads and wielded a hockey stick, he’d be Brent Segvich. Segvich knows only one speed when he’s on a sheet of ice: turbo. He and New Trier Green senior forward Jason Kuker nearly teamed up for a pair of goals in the loss to Barrington last week. He and Kuker also inadvertently collided at full-speed in the first period.

Segvich’s two-word breakdown to Kuker, as they glided by one another shortly after the clash: “My bad.”

But he said nothing to Barrington’s goal after crashing into and dislodging it late in the third period.

“Big, strong kid, with a lot skill,” New Trier Green assistant coach Chad Bidwill says of Segvich. “He’s a goal-scorer, a big part of our team. We rely heavily on him. But what makes him successful isn’t just what he does for us offensively. Brent also plays well at the defensive end of the ice.

“And he works as hard in practice as he does in games,” the coach adds.

Off the ice, Segvich is an all-star cut-up, a fun-loving goofball who could show up as an audience member at a Zanies and perform on stage — as a last-minute replacement for a professional stand-up comic.

And then there’s Segvich’s singing voice. It must be better than decent because friends have urged him to attend an “American Idol” tryout session.

“He’s a big singer … loves to sing, loves to sing anywhere,” New Trier Green backup goalie Joe Eidelman says. “We want him to sing the national anthem at sporting events. A lot of us do. Maybe he’ll sing at the United Center someday. If you’re lucky, he’ll perform in front of you.

“There’s always a lot of pressure, playing on a team like this,” admits Segvich, interested in pursuing club hockey in college. “But to me it’s fun pressure. This loss [to Barrington, on Dec. 7], sure it was tough. But a loss can be a good thing sometimes, you know? A loss like this, maybe it will wake us up, remind us that we’re human.”

Having Brent Segvich, human, around certainly eases pressure. Nothing breaks up the tension of a taut locker room like a teenager breaking into song after a scoreless period against a rival team. Segvich has been there, warbled that.

“He’s a funny character, Brent,” Bidwill says. “He keeps everybody loose and happy and cheery.”

Notable: New Trier’s Graham Soman and Kevin Marren scored the goals in Green’s 5-2 loss to Barrington’s Broncos on Dec. 7. Forward Brendan Kenny had two assists. NT Green coach Bob Melton was not behind the bench for the Barrington-NT game. He was in New York, coaching NT’s Blue team to a tournament title in Buffalo. … NT Green senior goalie Jack Junge made the save of the night against Barrington, using the back of his left glove to parry a bullet of a shot at 6:10 of the second period. The puck popped up and fluttered southward. Junge casually trapped it (think of a referee catching a flipped coin) with his right glove.