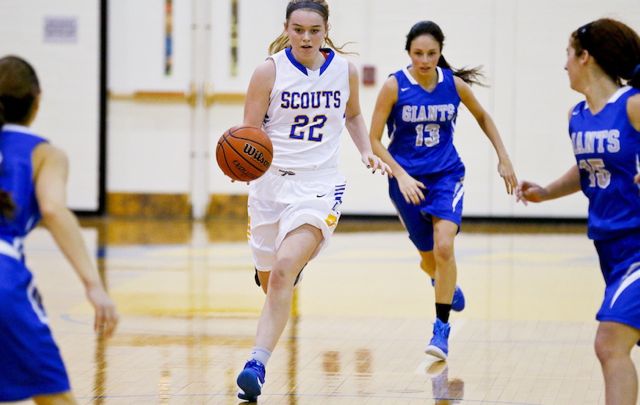 But forget about the numbers for a spell. Green’s alluring, spellbinding move was worth revisiting afterward. Sitting in the bleachers of an empty gym, Green was prompted to do so. Green obliged.

Yes, in soccer — minus the illegal use of the hands. Scouts soccer coach Ty Stuckslager saw Green execute the dribble-left-dribble-right-spin move in practices. Repeatedly. It reached the point where, one day, he dubbed the move “The Brooke.”

What Green had to be last winter, for the entire 2013-14 basketball season: “The Stats Person.” A torn ACL in her right knee — suffered on the night of the last day of a summer hoops camp at the University of Notre Dame, following her sophomore year — kept her planted, iPad in hands, on the Scouts’ bench during games.

“I did get to practice,” Green recalled. “But all I could do was shoot.”

Green served as a varsity point guard her sophomore season. The knee injury happened. She rehabbed, earned a Ph.D. in patience, missed the first couple of weeks of her junior soccer season and then helped the Scouts capture the first girls state soccer title in program history.

Green showed up for basketball this winter wearing an onerous black knee brace, eager to start again for the Scouts but not to supplant incumbent starting point guard Delaney Williams, now a sophomore.

They both start this winter.

“It’s nice, having two point guards on the court at the same time,” Lake Forest coach Kyle Wilhelm said after his club improved to 4-4 on Dec. 6.

Green and Williams, though, don’t get in each other’s way while directing the offense. Green, a captain, is more than capable of performing productively as a point guard, shooting guard, small forward and power forward.

“Versatile. Brooke is so versatile,” said LF senior Grace Torkelson, the starting ‘5’ (center) who also plays quite well as a power forward. “It’s really nice to have her back; that was tough, competing without her last year. She brings everybody together. When we’re down in games, she takes great shots, helps us get back in those games.

“What she did [score 19 points, in a 48-39 defeat of Woodstock North on Nov. 24) in one of our tournament games at Vernon Hills,” she added, “was fun to watch. She hit some big threes, drove for some other baskets, did a lot of things well for us.”

“Nothing is eye-poppingly big when you look at her stats,” Wilhelm said. “But she does very well in many categories. Brooke helps us in every facet of the game.

“Everybody looks up to her,” the coach added. “She’s hard-working, super competitive. She has to win every drill in practice. And she’s physical. You can see the soccer in her when she’s jockeying for position in a basketball game.”

Green intends to play basketball and soccer at the club level when she enters a college. Indiana University and the University of Iowa have accepted her. She is waiting to hear from Clemson.

“I love both sports,” Green said. “I will still need to have those sports in my life when I’m in college. I’m thinking business, maybe [for a major]. I would love to live and work in Chicago after graduating from college. Travel … I’ll also want to travel a little bit.”

The discussion turned to inspirations in her life. Green contemplated the topic for a few seconds before blurting, “I got this! [Actress] Jennifer Lawrence. She never worries about criticism. She lives her life, acts in movies. She’s funny, relaxed. I like her personality.”

“Brooke always makes me laugh in the bus,” said Torkelson, who has known Green since they were third-graders. “Her sense of humor is observational, sarcastic … sharp.”