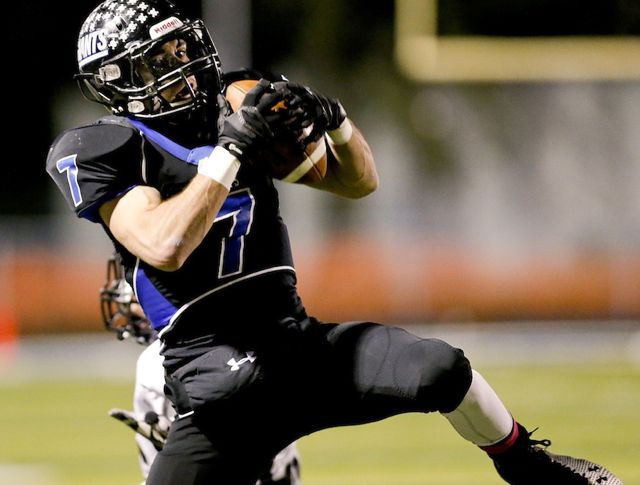 Tommy Rudman was a two-way player for the Highland Park High School football team this past fall. Despite having Crohn’s disease, he was named the CSL North Defensive Player of the Year. Photography by Joel Lerner

You are a seventh-grader in a room with a doctor and your parents. You’ve lost a scary amount of weight, your stomach hurts constantly, you’re tired, and you recently missed two weeks of school. Straight.

The doctor tells you that you have Crohn’s disease. You look at your parents, and they’re visibly upset. The cold room gets colder. Your reaction to the news is confusion because you had never heard of the disease and you have no idea how to spell it.

Crohn’s (rhymes with drones) disease is a chronic inflammatory condition of the gastrointestinal tract.

Rudman is now a senior at Highland Park High School, one of the best athletes at the school, the reigning Central Suburban League North Defensive Player of the Year in football, a workout regular at Performance Factory Training in Highwood, a super fan of super hero movies who likes to order Sour Patch Kids candy, a pretzel and a blue slushie before movies.

And that Crohn’s thing?

Rudman still has it.

Rudman still deals with it.

Rudman still stares it down, still manages it.

“There were times I thought about locking myself in my room when I was in the seventh and eighth grades,” recalls the 5-foot-11, 185-pound linebacker/safety/slot receiver, who helped the Giants win all nine of their regular season games this past fall. “It was really frustrating, going through what I had to go through. But I wasn’t one of those who always wondered, ‘Why me?’ I kept telling myself, ‘I won’t let this beat me.’ ”

The doctor put Rudman on steroids shortly after the diagnosis, and Rudman’s immediate thought was the one any normal, naïve, sports-loving boy would have upon hearing the ‘s’ word.

“I thought, ‘Great, I’ll get big and muscular and really strong,’ ” Rudman says. “Instead I got fat, with acne all over my neck, chest and back. I was embarrassed. I never wanted to take my shirt off.”

Initially he had to stay away from dairy products, nuts, popcorn, anything with seeds, spicy food and raw vegetables.

Subsequent treatments — the kind he continues to undergo every two months, at the University of Chicago Medical Center — involved a two-hour REMICADE infusion that lessens inflammation. During the treatments he either takes a nap or watches a movie. (The only food he has to avoid today is popcorn).

Rudman underwent an infusion on the eve of two football games in 2014 — and played in both victories.

“My coaches were great to me, totally understanding,” he says.

“Tommy,” Chiodo says, “ran a 4.5 in the 40 [-yard dash]. The timer summoned over another coach and had him run it again. He ran faster the second time when both clocks were on him.

“Tommy was the best athlete on our football team when it came to running and jumping. Our senior class was full of great competitors, which was the reason we went [undefeated in the regular season]. Of the great competitors in Highland Park football history, Tommy Rudman is certainly near or at the top of the list.”

Lake Forest Academy’s football team found that out in its season-opening 41-10 loss at Highland Park on Aug. 29. Rudman returned an interception 20 yards for a touchdown and caught five passes for 111 yards. In a 17-14 defeat of host Deerfield on Sept. 26, Rudman came down with receptions at critical junctures of the game-winning touchdown drive, capped by quarterback Sam Nevers’ 36-yard TD toss to Luke Norcia.

Rudman finished with 46 tackles (14 for loss), three interceptions and three TD catches in 10 games for one of the best squads in program history.

The noise from one of his tackles for loss — in a 63-0 rout of visiting Maine East on Oct. 10 — might still be ringing in Highland Park senior running back Cole Greenberg’s ears.

“The hit Tommy made on that running back … it sounded like a car accident; it was that loud,” says Greenberg, the 2014 CSL North offensive player of the year. “In addition to being a great athlete, Tommy was a great leader for us. But he also has a side to him, a little-kid side — that’s another reason so many of us love being around him.”

Rudman wore a super hero costume at school on Halloween, the day before HP’s marvelous season would end suddenly with a 17-10 loss to visiting Fenwick in the first round of the Class 7A playoffs.

“The costume he was wearing that day … it looked funny on him, really funny,” Greenberg recalls. “It was a kid’s costume, size large.”

But Rudman’s favorite ensemble in the fall was his Giants football uniform (No. 7), especially as the season progressed and the buzz about the team’s success reached a teeming-beehive-at-every-corner level at HPHS.

“Not once did I dread going to practice, because the winning was so much fun,” says Rudman, who is interested in majoring in business and looking at Indiana University and Lehigh (Pa.) University — the alma mater of his father (Adam) and uncle (Peter). “All that work we did, it all paid off. There was nothing like the feeling after a win, walking off a field and seeing how happy everybody was, how excited we were knowing we’d get to play another game the next weekend.”

The Crohn’s disease survivor is happy — and thriving — these days for a number of reasons, with none bigger than the way he opted to tackle the condition.

“I never complained,” Rudman says. “I never wanted to complain. I never let it fully get to me. My thinking was and still is, ‘I will be fine; I will tough it out.’ Facing what I’ve faced, I learned I can persevere through anything.

“If somebody my age or younger gets this, that person has to know that no matter how rough things get, it’s not forever. That person should focus on getting better, not on the disease.”

A local resident made and sold a variety of spa products this fall, earmarking half of the profits for Crohn’s disease research.

Rudman happens to know the

entrepreneur/philanthropist quite well. She is a 10-year-old fifth-grader at Indian Trail Elementary School in Highland Park.

She is Abby Rudman — the youngest of Tommy’s three sisters.

“She didn’t even tell me about her plan to donate money to Crohn’s,” Tommy Rudman says. “My mom [Emily] told me. When I found out about that, it made me … happy. I felt really honored.”