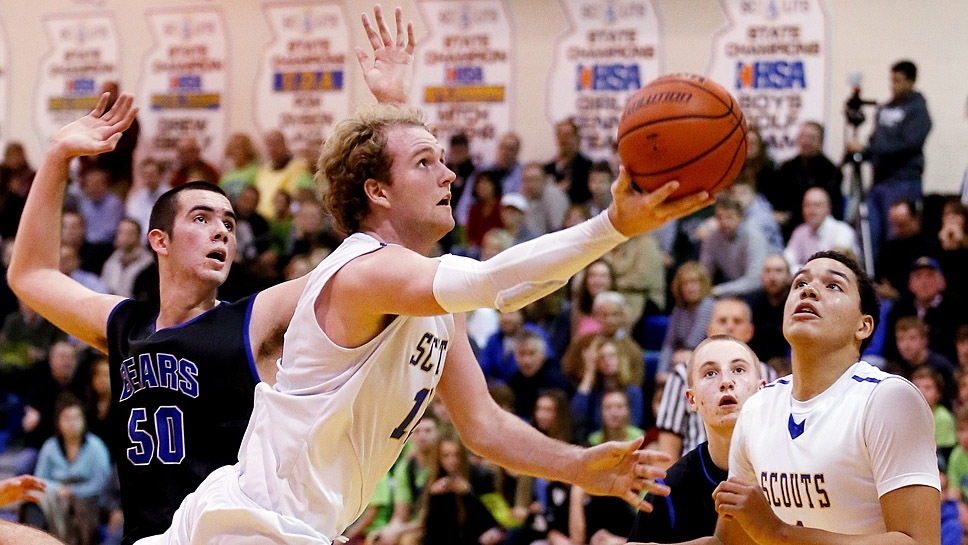 With only seven games played this season, Boudreaux figures to add plenty more points to his current total (1,497).

“This is huge for me,” said Boudreaux, who play his college basketball at Dartmouth College, “especially since there have been a lot of great players who have come through Lake Forest High School. It’s indescribable.”

Growing up, Boudreaux was a big fan of Vogrich, a 2009 LFHS graduate who went on to play Big Ten basketball at the University of Michigan.

“I remember going to Lake Forest games, when he would drop 25 (points),” said Boudreaux. “He was an awesome player for Lake Forest and Michigan.”

Steve Vogrich, Matt’s younger brother, is a senior on the Scouts (7-0). Sidelined with an illness, he had a front-row seat at this record-breaking event.

“I’ve been expecting this for a while. It’s not surprising,” said the 6-7 forward. “I feel a little sad for my brother. But I know Matt will be glad for him.

It was a night for Boudreaux to celebrate. Immediately after leaving the trainer’s room, he walked into the main gymnasium at Libertyville and was met by applause from members of his family, players, coaches and fans. It was one of those spontaneous gatherings. He also was awarded the official game ball.

And yet, it was something of a trying night for Boudreaux and his teammates. The Scouts didn’t shoot well, and they committed 20 turnovers.

And, there was a major scare. With 6:20 left in the fourth quarter, Boudreaux hobbled off the court with a sprained left ankle.

Give the Libertyville trainer, Ron Russ, an assist. He re-taped Boudreaux’s ankle in quick fashion.

“I thanked him for getting me back on the court,” said Boudreaux.

In less than three minutes (of game clock), he was back on the floor.

And Boudreaux went to work immediately. First, he scored inside off a feed from Danny Carollo. Then, on LF’s next possession, he drove the lane and made an off-balanced scoop layup.

He scored seven of his team’s final nine points, including those record-tying and record-breaking free throws which put the Scouts up by four points, 37-34, with 10 seconds on the clock.

LF coach Phil LaScala loved the fact that the record was broken in an important game situation.

“How cool is that?” said LaScala. “He broke the record when his points meant something. They came in a clutch situation.

“He’s the guy you want having the ball at the end of game,” the coach added. “He’s an imaginative player. He finds ways to get open. He finds way to finish plays.”