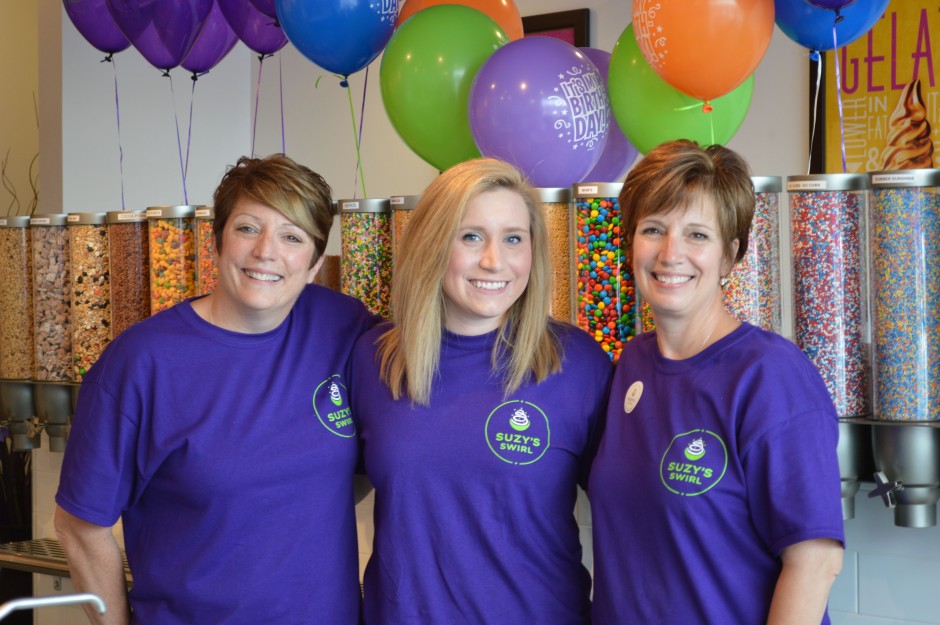 With the impending holiday season in mind, DNS decided to put together a series of stories about local people who have used a personal or familial challenge as fuel with which to make a positive impact on others. Suzy’s Swirl is one of those stories…

There was never supposed to be a Suzy Swirl’s Frozen Yogurt in the first place.

Instead, four years ago, Sue Tierno and her husband Joe were in the process of opening a Chicago-style Italian joint named “JP’s”, with the help of Sue’s sister Kathy, a restaurant consultant with almost 30 years of experience. Sue was working as a computer aid at a grade school at the time; Joe was looking into semi-retirement. Then, a year into the planning, Joe abruptly passed away from cardiac arrest.

“A key component to this was suddenly gone,” Tierno remembers. Naturally, she spent the next few months trying to pull her and her four children’s lives back together following the monumental loss. But shortly after, she and her sister Kathy decided to revisit the restaurant idea—in large part to honor her husband.

“We were looking for a space to possibly do a JP’s,” Tierno recalls. “But we couldn’t find a space that we wanted.”

In the meantime, though, Tierno found herself visiting a slew of frozen yogurt stores with her daughter across the state.

“And we thought, you know what, ‘frozen yogurt, we can do this.’”

Two and half years ago, with professional guidance from her sister, Tierno opened her first Suzy’s Swirl in Gurnee—the name of which was derived from Suzy Snowflake, a cartoon short shown annually during the Christmas season on WGN, and the fact that one could “swirl” anything into frozen yogurt, whether it be cake, pie, or any number of other traditional desserts.

“With Suzy’s Swirl,” Tierno adds, “we’re not only trying to ‘swirl’ a great product—we say we’re swirling greatness, goodness, and gratitude, which also implies giving something back to the community we’re a part of.”

Indeed, Suzy’s Swirl—with it’s bevy of high-quality, artisanal products and oft-unorthodox ingredients—is infamous for its Big Joe Challenge, which dares willing participants to consume 64-ounces of frozen yogurt and 8 ounces of toppings in just 20 minutes. The catch: if they don’t finish (and Tierno informs me that many falter, understandably, after the first 32 ounces), challengers make a donation to the American Heart Association.

“I think when something like this happens,” Tierno says, in reference to her husband’s sudden passing, “you have two choices. You can curl up, crawl into bed, and say I’m not going out anymore. Or you can say, you know what, I’ve been given all the tools I need, my husband was a great man and a great father, and we’re going to move forward, because that’s what he would’ve wanted.”

Tierno and her family aren’t showing any signs of slowing down. They’ve already opened a second location of Suzy’s Swirl in Lake Bluff, and, if all goes according to plan, hope to open more in the future. She also told me that they hope to expand their “fam-tizing” program—her personal take on franchising that would help put 100 families back to work, particularly veterans.

“For me, the whole thing has showed my kids that even in the most traumatic time, we could pull ourselves together, do something positive and do something that their dad could still be a part of.”