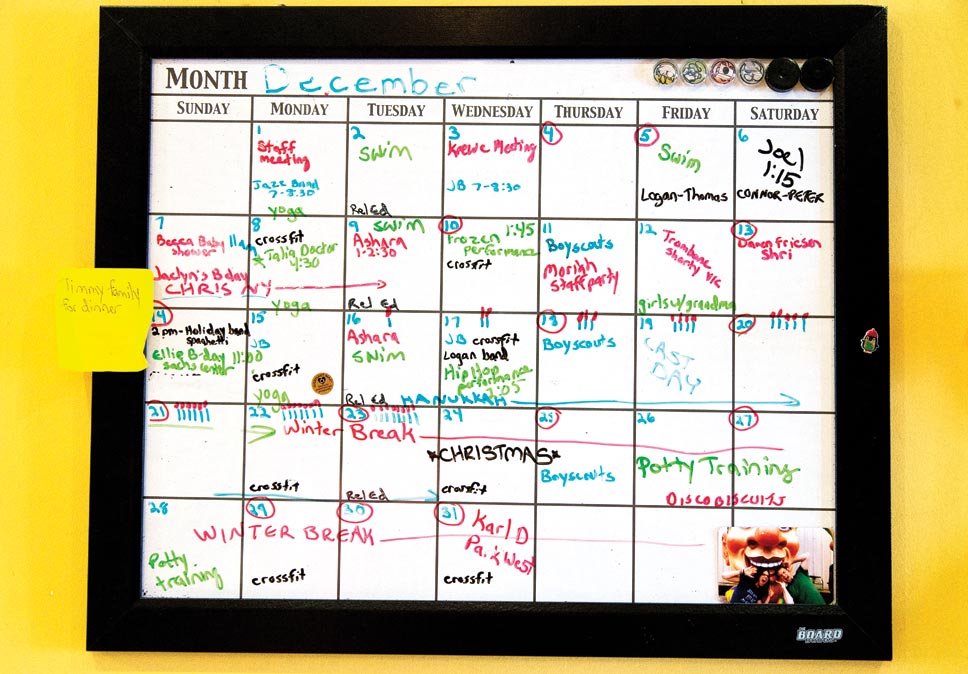 From a distance, the whiteboard calendar on a kitchen wall in the Gleasons’ house in Highland Park appears to be a multicolored mess, an art project gone D-minus bad.

Practically every square — for each day in December — contains at least one reminder of an activity for the family of six: Robin Taxman-Gleason and her husband, Chris Gleason; Robin’s stepchildren, 14-year-old Connor and 10-year-old Logan; and the couple’s pair of toddlers, four-year-old Nola and two-year-old Talia.

The parents’ to-do items were written with a pink dry-erase marker. Green words and start times denote activities for the preschoolers. Wondering what Connor has to do on a certain day? Look for the blue scribbles and scratches. Anything jotted in black is a Logan commitment.

“That whiteboard is my bible,” says Robin, a preschooler teacher who plans to celebrate Hanukkah (Dec. 16-24) and Christmas under the same roof again this month. “December is a tough month, and not just because we’re all doing so many things and driving all over the place. When we’re home we all usually have to stay inside because of the weather. And we’re all usually sick at the same time.

“I try as hard as I can to attend a yoga class two times a week. Yoga keeps me sane.”

Moms on the North Shore do not get varsity letters for serving as invaluable captains of their households and making sure their children arrive at games on time. And in full uniform. But they should, shouldn’t they? Especially during the merry month of December, when holiday and birthday parties (for kids and adults) seemingly outnumber the number of school days and work days, and when the driver’s seat of the family car becomes way more familiar than the comfy chair in the den.

“You have to have a sense of humor during this time of year,” says Lake Forest resident Catherine Yehle, a mother of four (ages 11-16) who works 20-plus hours a week as program director at Gorton Community Center in her hometown and recently joined the Lake Forest Caucus. “You can’t take everything too seriously. The calendar we put up on a wall in our kitchen is one of those big ones you see in offices. December … it’s not pretty; there’s a lot written all over it.

“I remember my mom put a sign up at home with the line, ‘Christmas should be every other year.’ ”
Yehle laughs.

Many swim practices for one of Yehle’s children start at 5:45 a.m. On those days she wakes up at 5:30 a.m., taxies (fare: free) the athlete to the school, drives back home, gets ready for work. After work, there might be a hockey tournament on the docket, a dance commitment for another child, volunteer duty (with her husband, Jeff) at a school’s concession stand, dinner to prepare, a tennis match with friends.

Maybe all of the above. Busy, busy.

“Tennis helps my mind,” Yehle says. “I like it because it forces me to be sharp. I have to be sharp when I play against the women in our group.”

Jennifer Riccardi Virgili of Wilmette works five days week in Chicago as director of corporate finance and banking for Boeing. The mother of three young passengers at home (ages six, four and one) likes to work out at her work place and run.

“Get the endorphins going — that keeps me sane,” says Virgili, who grew up in Northbrook and attended Glenbrook North High School. “But I don’t get overwhelmed in December because I make sure I don’t overcommit, don’t take on more than I can handle. My kids … they’re getting invited to parties now and doing activities on the weekends. My [company-issued] Blackberry holds my work and personal calendars. My calendar used to be in my head before I had children.”

Act I in Alex Buck’s typical day: view her work, personal and three kids’ schedules and focus on completing one medium- and one low-priority task — before tackling her high priorities.

“I used to deal with only high priorities,” says Buck, a resident of Evanston, mother of three (ages six, five and two), COO of a law firm, practicing attorney and co-founder of Plumwise, a private, selective recommendation site. “It would take me eight months to complete all of my mediums and lows. Now, I’m at least taking care of some of those.

“My kids go to three different schools in three different towns [Wilmette, Winnetka and Evanston], so it can get a little hectic at times. Each day I make sure my husband [Jon], our nanny and I have a laminated version of the schedule detailing all of our commitments. You can put that in the seat next to you in the car or in the center console.”

In addition to her highly active professional and family lives, Buck somehow manages to find time for commitments to nonprofit organizations. Her social life? She has one of those, too — without having to apply an oversized shoehorn to squeeze it into her jam-packed days. Alex and Jon attended three parties between Dec. 1-7, including their own.

During December — and the other 11 months — Jacque Heydorn of Lake Forest prefers running around. And working out. And leading fitness classes at Shred 415 in Northfield. The mother of three (ages eight, 10 and 12] and wife of Warren raises two boys who wrestle and a daughter who swims. The Heydorns’ activities-laden whiteboard adorns a wall in their laundry room. Wonder what spins more in there, … heads or the washing machine?

“A lot of people out there are snapping at others because they’re stressed at this time of year,” Jacque Heydorn says. “They’re also tired or not feeling well. They’re not getting enough sleep. Maybe they’re not exercising. I tell my kids, ‘You’ll treat people as well as you feel about yourself.’ It’s important for all of us to do whatever we need to do to get that feeling.”