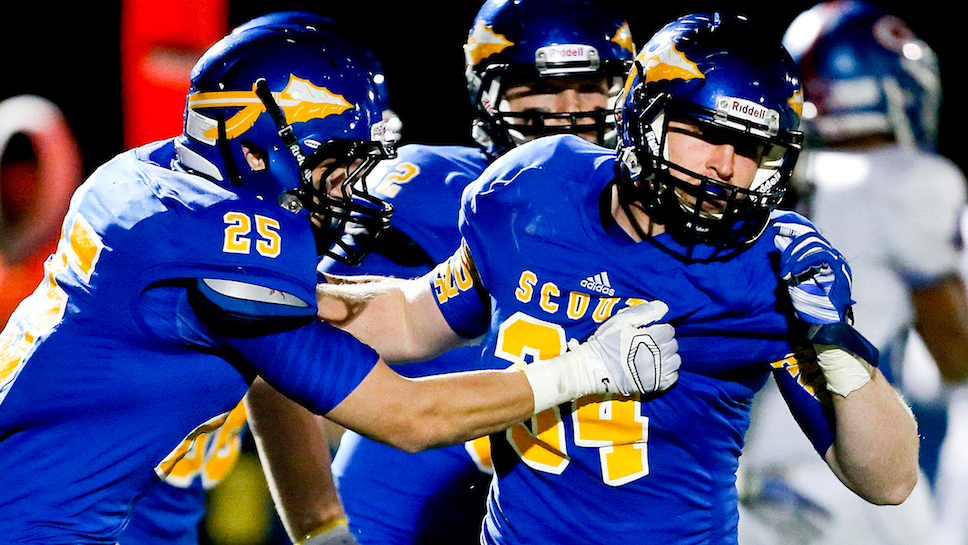 Lake Forest High School senior linebacker Jack Traynor capped off his three-year varsity career in record-setting fashion. According to the Illinois High School Association (IHSA), he is the state’s all-time leading tackler (378). Prior to the season (September, 2014 issue), Traynor was featured in a Forest & Bluff’s Personal Best column.

The Lake Forest High School cornerback was all set to drop a ball carrier for a short gain in a football playoff game last year.

Then, in an instant, both players felt the impact of another force: LFHS middle linebacker Jack Traynor, a freight train in a helmet. The cornerback and the ball carrier hit the turf simultaneously.

“Jack made the tackle and took them both out,” Scouts senior outside linebacker Trevor Morcott recalls.

Jack, now a 6-foot, 220-pound senior, got credit for one tackle, not two. The memorable collision in Lake Forest’s 41-6 defeat of Hubbard High School truly exemplified the method to his grandness.

“When Jack gets to the point of attack,” Scouts football coach Chuck Spagnoli says, “he’s usually not in a giving mood.”

He’s in a leadership mode this fall, after serving as a hard-hitting starter on two of the best teams (Class 6A state semifinalist in 2012, Class 6A state quarterfinalist last fall) in program history. It’s a role Jack could not wait to embrace a week before the start of training camp in August.

“That will be my focus, helping our new starters and younger guys,” says Jack, who grew up as a University of Michigan football fan but has set his sights on attending an Ivy League school. “It’ll be different, finally being one of the old linebackers.

“My sophomore season … it felt like everybody on the field was playing at a million mph. I had to make an adjustment. Halfway through the season, things started to click, started to slow down.”

Jack paced the Scouts two years ago in total tackles (95) and solo stops (23), including five behind the line of scrimmage. He then amassed a team-high 117 total tackles, recorded five sacks and earned Illinois High School Football Coaches Association academic all-state status as a junior.

“Jack understands the proper angles of pursuit [as a tackler],” Chuck says. “He’s always been extremely competitive, extremely good at putting himself in a great position to make a tackle. And his outstanding athletic ability — having that certainly doesn’t hurt.”

But Jack won’t be remembered only for his exploits on gridirons after his final prep tackle. Jack also battles on basketball courts as a … point guard. Few athletes are able to transition well from stuffing bruising running backs in the fall months to thwarting swift guards in the winter.

Jack is one of them.

A varsity hoopster since the start of his sophomore season, Jack helped the Scouts win 22 of 29 games last winter.

“Jack has crazy quickness,” Trevor says. “He has a quicker first step than some of our cornerbacks and wide receivers have. He’s an agile player who’s very aggressive and explosive. And he’s smart.

“Jack,” he adds, “always knows where to be and what to do when he gets there.”

Jack’s parents, Carl and Darcy, are University of Michigan graduates. The Traynor family moved from Michigan to football-mad Ohio, where Jack fell in love with the sport as a third-grade middle linebacker. A year after moving to Lake Forest, Jack, a sixth-grader at the time, was too big to play linebacker. Youth football officials made Jack compete as a defensive end, where he wouldn’t be able to inflict as much harm on ball carriers as he would have from a linebacker slot.

“I didn’t have much fun that season,” admits Jack, who received a football scholarship offer from Western Illinois University. “But it was football. I couldn’t complain.”

Jack also makes significant noise—make that, music—in between violent Game Days. He tickles the ivories at home, much to the delight of his mother.

“She got me into the piano,” says Jack, an elected youth elder at First Presbyterian Church in Lake Forest. “For years I played at recitals while living in Ohio. Now I like to play the piano in our family room every now and then. My mom listens, and she makes comments.”

His football coach admires Jack, the linebacker, and Jack, the teen, and he delivers praise.