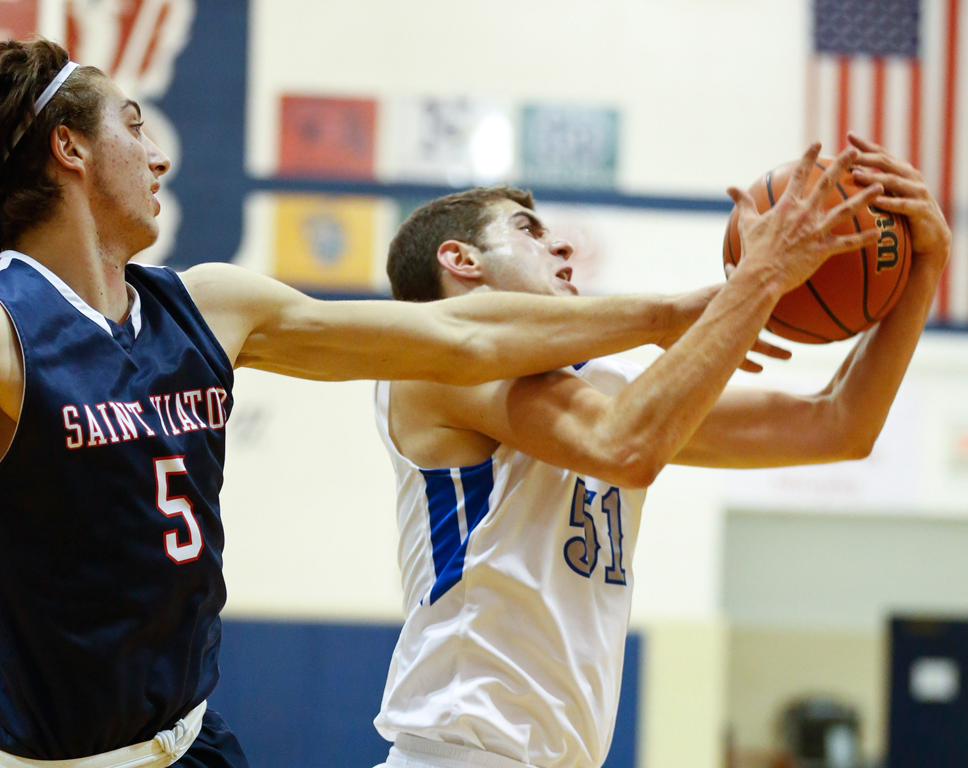 BOYS HOOPS: Had the hard foul Highland Park senior forward Jordan Krawitz absorbed in a basketball game last weekend occurred in an NFL game, the perpetrator would have been fined — or suspended.

It was that violent.

The 6-foot-4, 190-pound Krawitz was going up for a shot in the lane when a St. Viator Lion swung in a attempt to block it. The Lion’s arm hit nothing but Krawitz’s head, sending the Giant to a crash landing on hardwood in the third quarter of a St. Viator Thanksgiving Tournament game in Arlington Heights on Nov. 28.

A referee quickly stepped in between the opposing players, thinking Krawitz was thinking about retaliating. 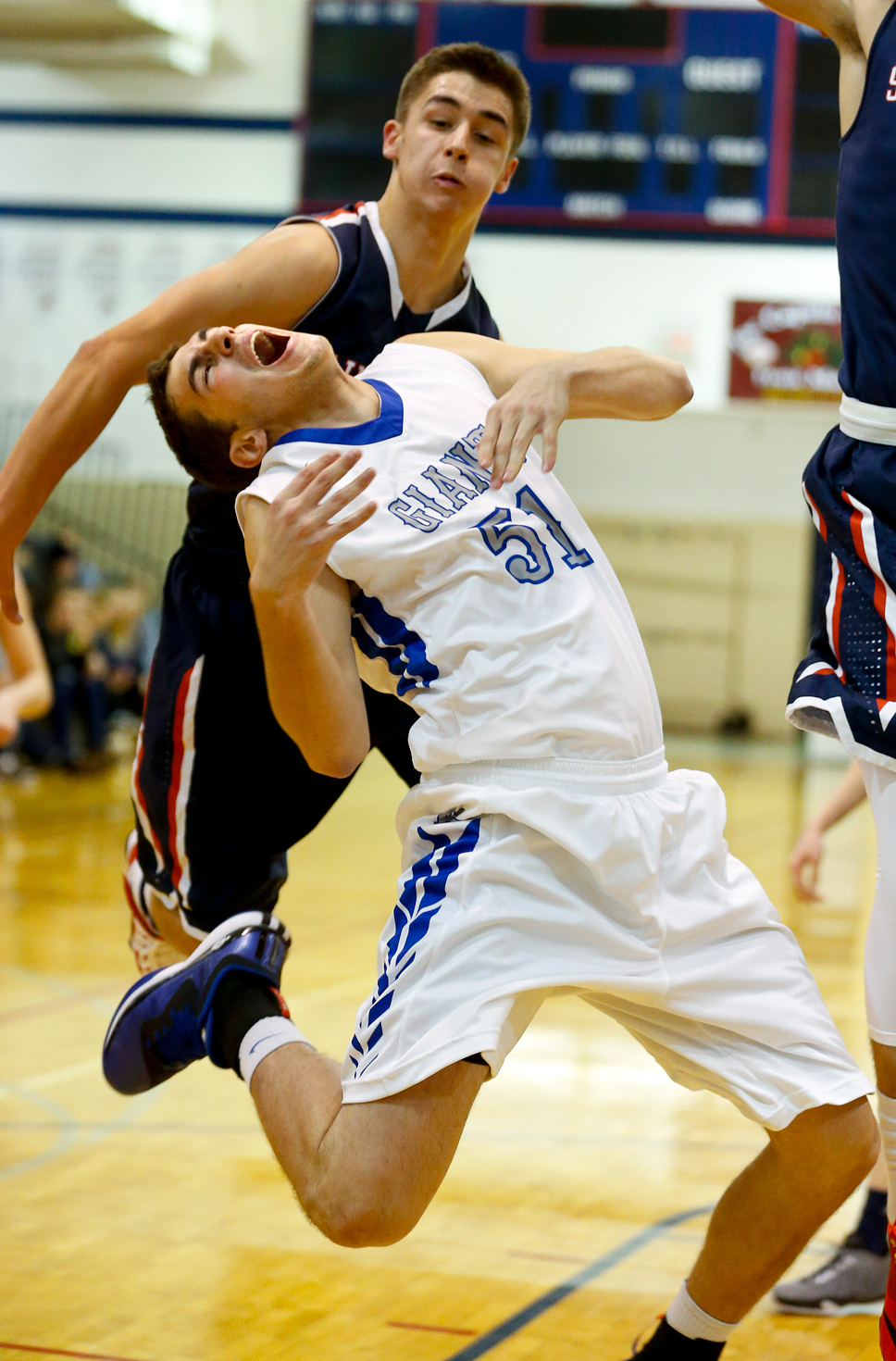 Jordan Krawitz (No. 51) is fouled hard in tourney game against St. Viator. Photography by Joel Lerner

But the ref quickly realized Krawitz’s only thought was the best one: to march directly to the free-throw line.

“He treated it like it was a normal foul,” Giants senior guard David Sachs said a day after HP’s 48-46 loss to the eventual tourney champion. “Our coaches stress poise and patience.

“Jordan,” he added, “showed a lot of poise after that foul.”

Krawitz will be expected to display a significant presence in the paint all winter, a season after averaging 7.5 points and a team-high 5.5 rebounds for a Class 4A sectional semifinalist. He averaged 9.3 points and 4.8 boards and collected a total of six steals in the Giants’ four games at St. Viator.

HP went 3-1 at the five-team tournament, good for runner-up honors in the round-robin format.

“Jordan is stronger, a little bigger, and he’s one of our better communicators on a guard-oriented team,” HP coach Paul Harris said. “What he does on a court isn’t always pretty, but it’s effective. Plus he’s incredibly coachable and always wants to be there for his teammates.”

The younger brother of Indiana University sophomore and business major Brandon Krawitz (a 2013 HPHS graduate who liked to score from the perimeter as a Giant), Jordan shot a combined 12-for-16 from the field in the Giants’ first two games — wins against Conant and Prospect. He finished with 14 points and eight rebounds in a 55-51 overtime defeat of Prospect on Nov. 26.

“Boxing out more and trying to be more aggressive and more of a presence in the post,” Krawitz said of his primary responsibilities for 2014-15. “I knew I’d be responsible for roles like that after we lost [post player] Tommy Sutker [to graduation].”

Several weeks after scoring five points, grabbing four rebounds and coming up with three steals in an upset of Lake Forest in a Class 4A regional final last winter, Krawitz had to accept the role of a rehabbing post player.

A serious ankle injury kept him off basketball courts for two months.

“We have great trainers,” Sachs said. “Jordan — one of our team’s seven seniors, and we’re all best friends — worked hard on getting healthy. He loves to be out there, loves the game. And he knows where he has to be at all times.”

What Krawitz wants to be after his college years: a media and entertainment agent. Think of a taller version of the Jeremy Piven character, Ari Gold, in the TV series “Entourage.”

“My mom [Michelle] told me Ari reminds her of me … always having something witty to say,” Krawitz said. “I guess that’s a compliment.”

Sachs wouldn’t be the least bit surprised if Krawitz ends up representing an ESPN broadcaster or a movie star after hanging up his high-tops for good.

“Jordan loves to talk,” Sachs said. “You need that love if you want to be successful in a management-type of job. Overall he’s a great guy who cares about everybody, a student who cares about academics.”

High on the list of colleges Krawitz — a prospective business major — is considering are Indiana and USC, meaning an MBA degree rather than an NBA career is his quest. But that won’t keep him from earning serious accolades during his final prep hoops season.

“Jordan is such an unselfish teammate, a player who always makes sure he’s in the right position,” Harris said. “His shot has improved; so has his passing.

“[Off the court] he’s always in a good mood and always good for a one-liner,” the coach added.

Notable: Krawitz scored the first field goal of the game — 14 seconds after the tip — in Highland Park’s 48-46 loss to St. Viator on Nov. 29. But the Giants wouldn’t tally their next points until senior guard Luke Norcia (15 points) hit a three-pointer at 5:35 of the second quarter. HP trailed 26-12 at the half. “We didn’t raise our voices at halftime,” Harris said. “We talked about pride, and we played with tremendous pride in the third quarter.” HP outscored the host school 20-7 in the third frame and got as close as 44-42 and 46-44 in the final minute of the fourth quarter. Sachs also scored 15 points in the setback. … Highland Park opened its season with a 54-52 defeat of Conant on Nov. 24, behind 13 points apiece from Norcia and Sachs. Sachs also dished seven assists, and HP senior forward Hallvard Lundevall grabbed a team-high six rebounds. … Sachs poured in 20 points and delivered nine assists in the OT win over Prospect on Nov. 26. Giants senior guard Jason Beermann finished with six of his team’s 15 steals. Lundevall and Krawitz each popped for eight rebounds. … Fourteen Giants scored at least two points in their 73-17 rout of Walther Lutheran’s Broncos in a St. Viator Tournament finale Nov. 29. Senior guard Max Goshen led the way with 10 points (all in the first half), followed by Beermann (nine), junior Zach Fleisher (eight points, five rebounds) and junior Toby Tigges (eight).