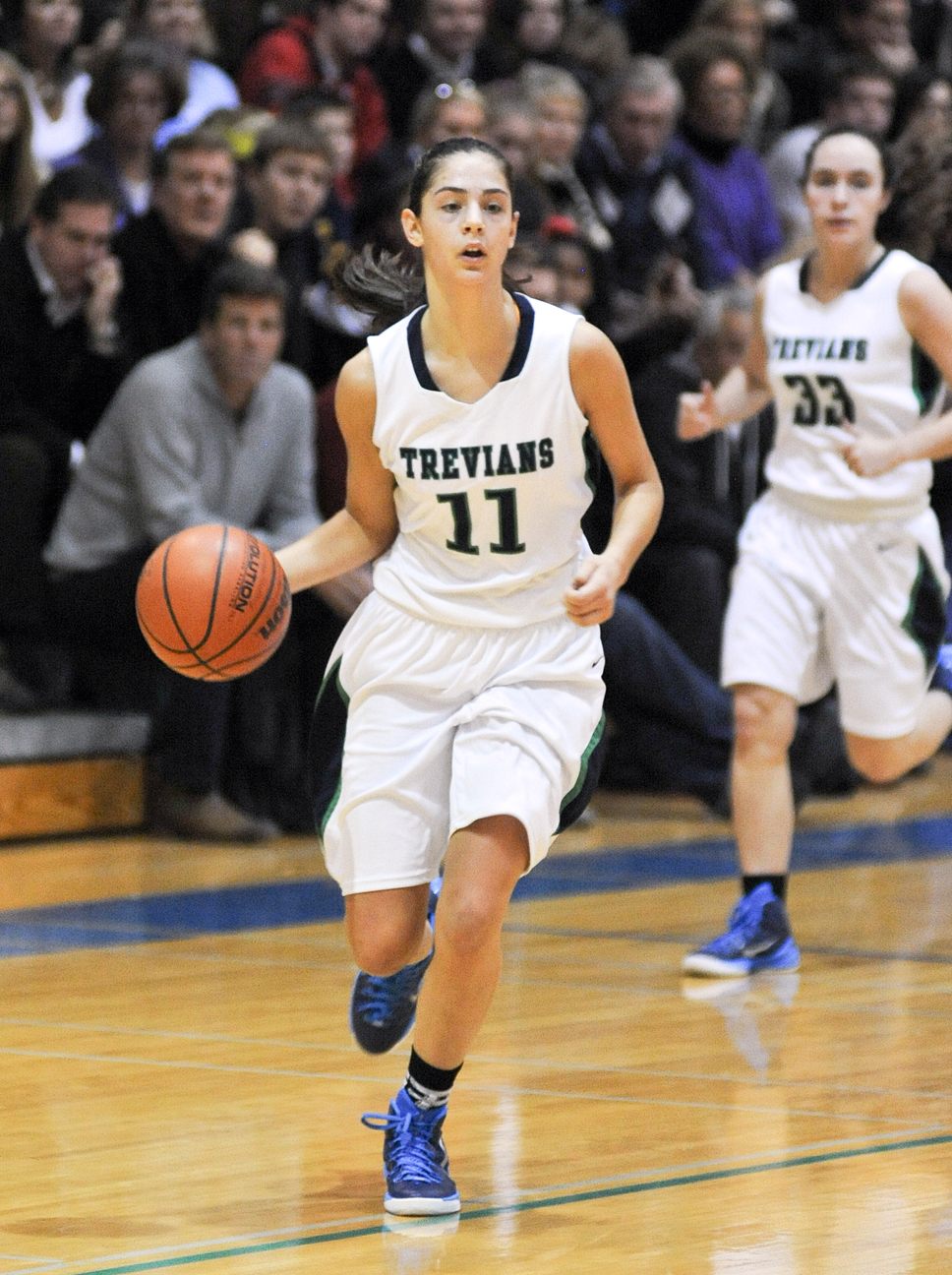 The 5-foot-10 transfer from Deerfield and daughter of Chicago Bulls assistant coach Andy Greer fielded a slew of questions as smoothly as she had whipped running, one-handed bounce passes in NT’s 48-39 overtime defeat of Loyola Academy on Nov. 28.

“It’s mine,” Greer said, referring to the basketball in her possession. “I brought it from home in case there weren’t any basketballs available when I got here early.

“I wanted to be able to shoot around before the game.”

Four of Greer’s official shots — including a free throw and a pair of treys in the middle two quarters — went in, helping the Trevians enter the fourth quarter with a 27-25 lead. She poured in nine of NT’s combined 18 points in the second and third quarters after going scoreless in the first quarter.

Greer came out of the game after committing her third foul at 1:17 of the second quarter, but NT coach Teri Rodgers let her start the second half.

“She knows what to do in [challenging] situations because of her high basketball IQ,” Rodgers said following Greer’s 12-point, four-rebound performance. “Nothing fazes her. When she missed those two free throws [with 48 seconds left in regulation, in a 36-36 game] and I looked at her, I knew right away that she was fine.

“Haley,” she added, “is level-headed, is able to shake things off.”

“It’s competitive … our practices are competitive,” Greer — an all-Central Suburban League North pick as a Deerfield Warriors sophomore last winter — said of her new environs. “Our coaches are great, and everybody contributes equally.”

“Haley has been awesome, truly awesome,” said the 6-3 Boehm, awesome herself while averaging 17.5 points, 9.0 rebounds and 3.5 blocks and earning — like Greer and NT junior guard/forward Kathryn Pedi — all-tourney honors at the NT Tournament.

It didn’t take long for Rodgers to discover Greer would have an immediate impact on a team that reached a Class 4A supersectional last winter and lost point guard Alexa Czyzynski to graduation.

“Her floor vision,” Rodgers said. “I noticed that right away in the summer. She has great awareness of where other players are.”

It’s not easy to be a slick ball handler and passer and not appear showy, but Greer pulls it off impeccably. If she needs to jazz up her dribbling against a tenacious defender near the time line, it’s because she wants to maintain the pace of New Trier’s transition.

Style points mean nothing to her, and she works as hard at moving without the ball as she does when she’s bouncing it.

“Haley is willing to try new things; she’s very creative,” Rodgers said, adding Greer has also provided “nice leadership” since she and her family moved closer to Lake Michigan. “She’s also not afraid to make mistakes. If she makes a mistake, she learns from it, keeps her head up.”

Greer turned heads with her driving spin move in the lane against Loyola’s Ramblers, drawing a foul in the final minute of the fourth quarter. She later faked an inbound pass to a teammate, looked calmly to her right and found a wide-open teammate.

“There was pressure,” admitted Greer, still securing her basketball. “But pressure … it’s fun; I enjoy close games. The atmosphere, the fans — all of it was fun.”

Watching the Chicago Bulls play — and her father, Andy, work concurrently at the United Center — must also delight the point guard.

“He’s a father of a player,” Rodgers said.

Notable: Boehm struck for 25 points (11-for-14 from the field) and finished with eight rebounds and three blocks in NT’s 79-55 defeat of Bogan in a tourney finale on Nov. 29. Pedi (14 points, 12 rebounds), Greer (nine points, seven assists, four steals) and Trevians senior forward Rachel West (six points, seven boards) also stood out against the Bengals. … Pedi displayed her impressive versatility in the Warren game, finishing with 14 points, six rebounds, six assists and three steals. … Greer played with four fouls in the final 3:54 of the fourth quarter and the four-minute OT session against Loyola Academy. … Before becoming a Bulls assistant coach, Andy Greer served as a scout for the Portland Trailblazers, an assistant with the Memphis Grizzlies (2007-09), an assistant with the Houston Rockets (2003-07) and an assistant with the New York Knicks (2001-03). Prior to his NBA posts, he helmed the men’s basketball team at Northern Illinois University for half of a season (2001) on an interim basis.

The Ramblers split four games at the New Trier Thanksgiving Tournament last month, topping Phillips 62-25 in their finale on Nov. 29.

Both made the all-tournament team.