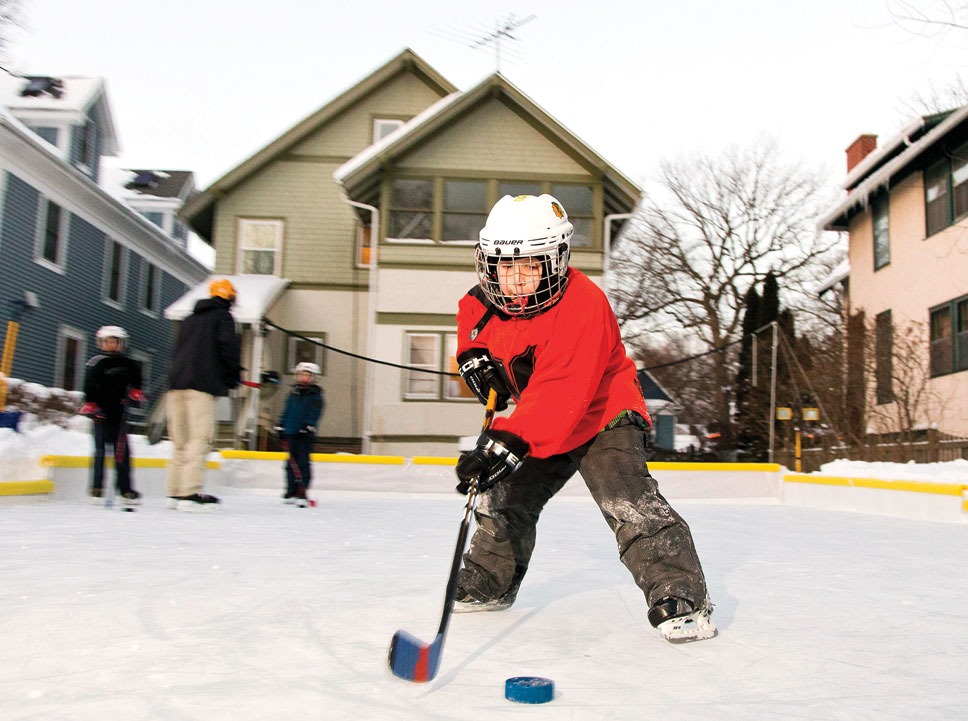 Snow falls slowly on a bunch of gliding boys playing a not-so-gentle game of pick-up hockey at West Park in Lake Forest.

Think of an enormous snow globe, after it had been shaken — and minus the glass sphere.

Lake Forest High School senior Mac Montagne — a golfer in the fall and a lacrosse player in the spring — can’t think of a place he’d rather be in the winter months than on a lighted outdoor rink in the middle of his hometown.

“It’s like old-time pond hockey when I’m out there skating with some of my best friends,” he says. “I love hockey; it’s my first love. What’s also great about West Park is seeing younger kids learn how to skate on another rink during our pick-up games.

“Winters … they’re long around here,” Montagne adds. “So it’s nice being able to look forward to something during those months, and I always look forward to doing something outside. If it’s cold and I’m either playing hockey or cross-country skiing [at Deerpath Golf Course in Lake Forest] with my sister Maryl, it doesn’t take me long to forget about the temperature.”

For most folks on the North Shore, winter starts right after the fork clangs the plate following that last bite of pumpkin pie on Thanksgiving Day. For others, it doesn’t officially kick off until there’s enough snow on the ground for some serious sledding on local hills. On the North Shore there are plenty of things to do outside in sub-32-degree temps, from checking out the car-stopping holiday lights on trees at the entrance of the Chicago Botanic Garden in Glencoe to cracking winners on a number of paddle tennis courts.

So don the sleigh apparel, get out there and enjoy the brisk, invigorating conditions in the next month or two — before another polar vortex confines the populace to stultifying indoor living 24/7.

“I love being outside and active and around people in the winter, with the sun shining after a snowfall,” says Erin Maassen, Glencoe Park District manager of marketing and communications. “Our park district’s Watts Ice Center has one of the only refrigerated outdoor ice rinks in the area, and the broomball that’s played on it … it’s fun, played by ‘Glencoe rules.’ Seeing kids and adults skating or playing around the rink, surrounded by trees and snow — that’s always a beautiful scene.”

The Watts Ice Center is the venue for a variety of special events this winter, including a skate-a-thon on Nov. 28 (6-8 p.m.) and Blackhawks Night on Jan. 30, featuring an appearance by Chicago Blackhawks mascot Tommy Hawk. In between those dates: The Itty Bitty New Year’s Eve bash, where kids (ages 2-6) get to skate, watch a balloon drop and partake in a countdown to … noon.

Whenever it’s high noon in Wilmette and New Trier High School students are stuck at home for a snow day, look for Kristen Nykaza frolicking atop a blanket of snow rather than trying to catch up on some sleep under a blanket inside.

“Winter is definitely my favorite season, with all the snow and how joyous it gets during the holidays,” says the senior, a state champion field hockey player and former competitive snowboarder who has skated on a rink in the backyard of a friend’s house, engaged in chummy snowball fights with her older brother, Nick (now 22), and built a ramp at home off the patio stairs for snowboarding and sledding sessions.

“When I was younger I enjoyed going to Lovelace Park [in Wilmette], looking for the biggest hill after a snowfall and sledding down it head-first on a Styrofoam sled,” adds Nykaza, who underwent surgery Nov. 4 to repair a right shoulder she had damaged during her intense snowboarding years.

The snowy hill to hit in Highland Park is the one located toward the back of Danny Cunniff Park, formerly known as Centennial Park. It was a must-sled destination for Kevin Clark, a 2007 Highland Park High School graduate who portrayed the young drummer, Freddy Jones, in the 2003 movie “School of Rock.”

“Nice and steep; you get down it quickly, really quickly,” Clark says. “My friends and I liked to build jumps along the hill. But we knew we had to get up and get out of the way in a hurry if we ever fell after hitting one of those jumps, because others were sledding super fast right behind us.”

Clark also liked to escape his house for a safer Winter Wonderland tradition, joining his parents for trips in the family car to marvel at homeowners’ light displays.

“I don’t think many people do that anymore,” he says. “I was in grade school, in a nice warm car, when I saw some amazing lights on massive houses in Lake Forest. Snow angels — yes, I made those when I was little. I still do that every year; you’re never too old to make a snow angel. Another thing I try to do each winter is hit a friend with a snowball … politely.”

New Trier’s Nykaza can’t wait to be able to throw anything. She has to wear a sling until late December or as soon her right shoulder heals.

“When I get rid of this thing, I’m going to run around, work out, do something — anything — active,” Nykaza says. “I’ll be so happy on that day, and I’m sure I’ll find the time to play around in the snow with my friends.”