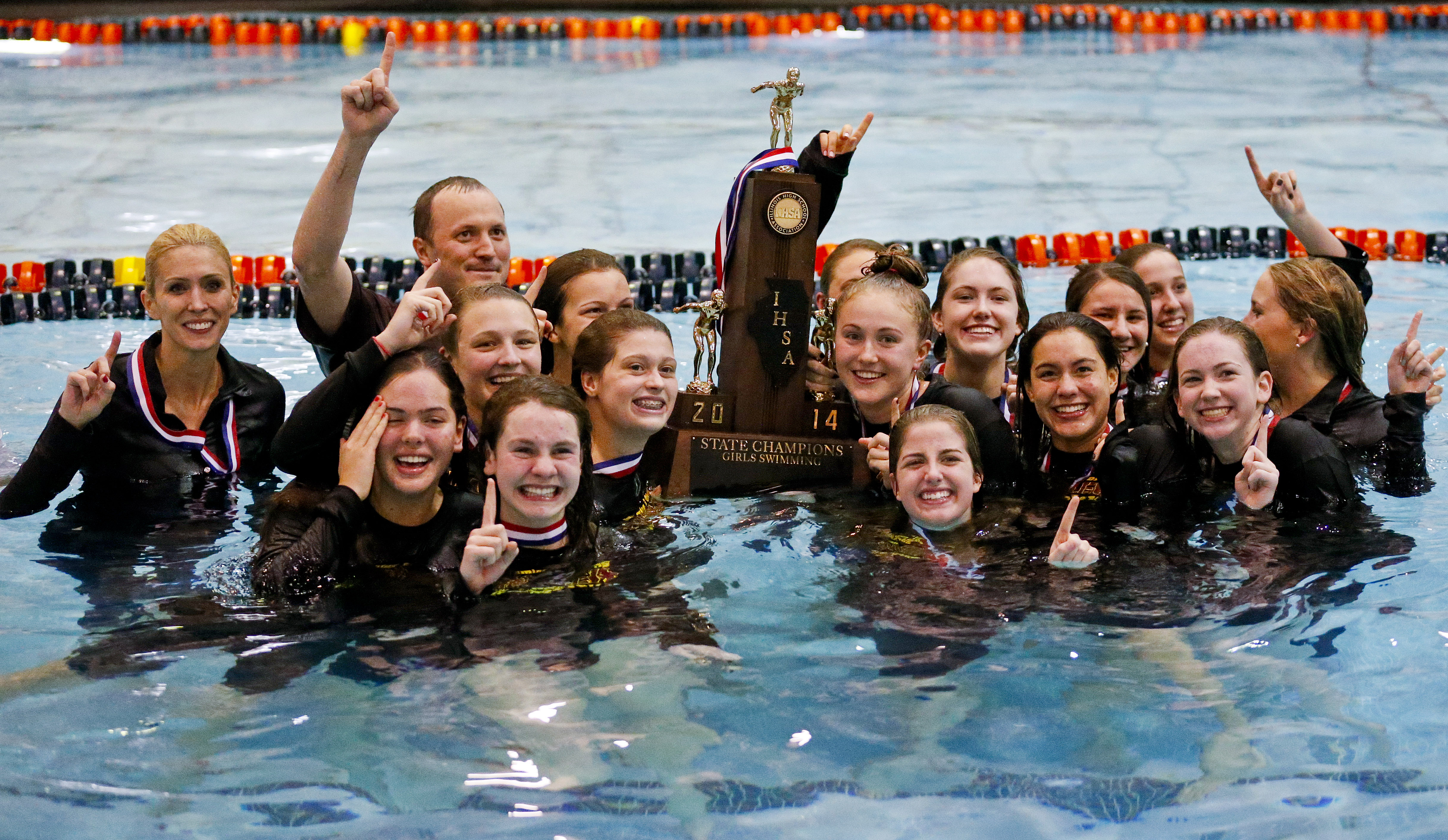 Before the start of the final event at the girls state swimming and diving meet in Evanston last weekend, Loyola Academy coach Mike Hengelmann found himself in a position to give a pep talk on deck.

“He’s soft-spoken and always in a good mood,” Grace Tierney would say later. “I like that in a coach.”

The Ramblers’ relay quartet had to finish sixth in a six-relay heat to capture the program’s first state title in program history. Hengelmann, therefore, urged the relay members to focus on safe starts, not fast swims.

Their starts were safe.

But their swims were electric, matching the pulsating atmosphere generated by the dry, raucous folks in the intimate natatorium.

Kyle, Andrew and the Tierney sisters clocked a first-place — and school-record — 3:27.05 to clinch the state championship in emphatic fashion. LA finished with 148 points, well in front of co-runners-up Downers Grove North (114) Rosary (114).

“A complete team effort,” a proud, appreciative Hengelmann said, noting the win in the last event of the meet also was LA’s lone event victory. “To cap the meet off with our only ‘W’ … huge. It was great watching Grace, one of our captains, bring that relay home. Phenomenal.”

The brothers/former Ramblers — Mike graduated from LA in 2000, Daniel in 1997 — stood in a lobby area after the girls state swim meet last weekend, surrounded by thrilled Loyola Academy backers. One of them was Kathy Hengelmann, probably the proudest mother in the Western Hemisphere on Nov. 22.

“They’re dedicated; they attended Loyola,” she said of her successful sons. “They love giving back. And their coaches, when they were in school, had quite an impact on them.”

Former LA swim coach Dennis Stonequist soaked up the good times — and the Ramblers’ fast times — from a seat in the pool bleachers at Evanston Township High School last weekend. He coached LA’s girls to a runner-up finish at the state meet in 2010.

“We get great support from our alumni at Loyola,” Mike Hengelmann said after the trophy presentation on Nov. 22. “I told our girls to cherish their roles in the tradition of Loyola Academy athletics.”

“This is very surreal,” she said afterward in a nearly empty natatorium. “I never thought this day would come. I don’t feel I deserve being one of the ones who helped this team win a state title.”

Tierney said her little sister, Ella, didn’t think she’d finish in the top 12 in the 500 free. But there Ella was, climbing a block for the start of the championship heat of the 500 free — after shearing nearly 13 seconds off her seed time (5:08.79, ranked 24th after sectional weekend) in the state preliminaries on Nov. 21.

Ella Tierney ended up bowing for a sixth-place medal, with a time of 4:58.39.

Loyola Academy senior Libby Jardeleza also churned briskly in the prelim session, breaking her school record in the 100 butterfly (55.06, second-fastest among finalists) and advancing to the championship heat of the 100 backstroke (prelim-best 55.25).

She then silvered in the 100 fly (55.43) and placed fifth in the 100 back (56.22) for a combined 23 team points the next day. The University of Pennsylvania-bound Jardeleza also served as the lead-off leg on Loyola Academy’s fifth-place 200 medley relay (1:45.84); junior Claire Voss, Kyle and freshman Cassidy Coughlin swam legs 2-4.

After qualifying for the diving finals in a morning prelim session on Nov. 21, Ramblers senior Katie Rourke stuck around.

And stuck around some more.

“I normally tell our divers to go home and get some sleep [after preliminaries],” Hengelmann said. “But Katie stayed here all the way through to the end of the swimming preliminaries. It was important for her to be a part of the team for the entire day.”

Andrew — a four-event state qualifier (three relays, 100 free) a year ago — scored in four events last weekend, including that memorable final race that doubled as a figurative bold-faced exclamation point for the Ramblers. She also won the consolation heat of the 200 free (1:51.13, seventh place overall), placed 10th in the 100 free (52.17) and swam the second leg of the fifth-place 200 free relay (with senior Claire Rushin, Coughlin and Grace Tierney).

Each Rambler wore a state team T-shirt last weekend with a fitting message on the back: “This one is fast — Coach Mike.”

It’s one of Hengelmann’s favorite sayings, four words he likes to utter during speed work at practices each season.

“I’m honored they decided to quote me,” said the humble coach, who also appeared embarrassed by the unwanted attention the T-shirt created. “They probably heard me say it a thousand times.”

Notable: Kyle finished 14th in the 100 fly (56.73), missing a consolation finals berth by 0.40. …. Loyola Academy’s girls swimming and diving team finished fourth, fifth and fourth at state the past three seasons, all under the guidance of Hengelmann. … Had Lake Forest High School’s crew finished first in the 400 free relay at state on Nov. 22, the Scouts would have earned a top-three team trophy. The unit took runner-up honors with a time of 3:27.18 — 0.13 behind Loyola Academy’s gold-medal effort. LF ended up in fourth place (114 points) in the team standings and only four points shy of claiming hardware.