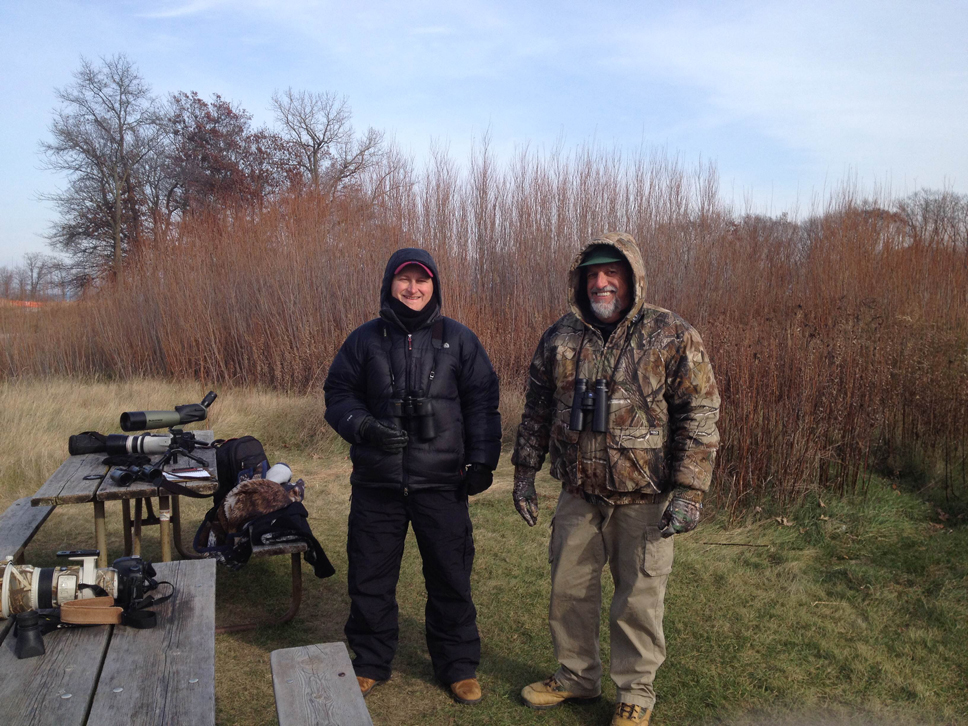 Vic Berardi and Michal Furmanek are not difficult to spot.

Actually, they make a quite conspicuous pair, and if you find yourself traversing the trails that slink through the Fort Sheridan Preserve  towards the promontory overlooking a large blue swath of Lake Michigan, you might, if it’s a Saturday, happen upon them, intently scanning the skies for something much more difficult to see: migratory hawks.

Which is how I located them one serene Saturday afternoon near the end of the fall season, on a clear blue November day with only the faintest suggestion of clouds. They were camped out on two picnic benches, upon which were scattered various tools of the hawk-watching trade: scopes and binoculars, notebooks and pens, cameras specifically outfitted for the task at hand. Furmanek held his binoculars up to his eyes and gazed up at the sky, extremely focused, as if he were on lookout, while Berardi and I chatted.

“It’s a pretty informal group right now,” Berardi had told me on the phone earlier, referring to the Fort Sheridan Hawkwatch, which has a handful of members. He started the group a year ago, after he and a few others took a break from their normal watch—up north at Illinois State Beach Park—to make some exploratory counts at Fort Sheridan. 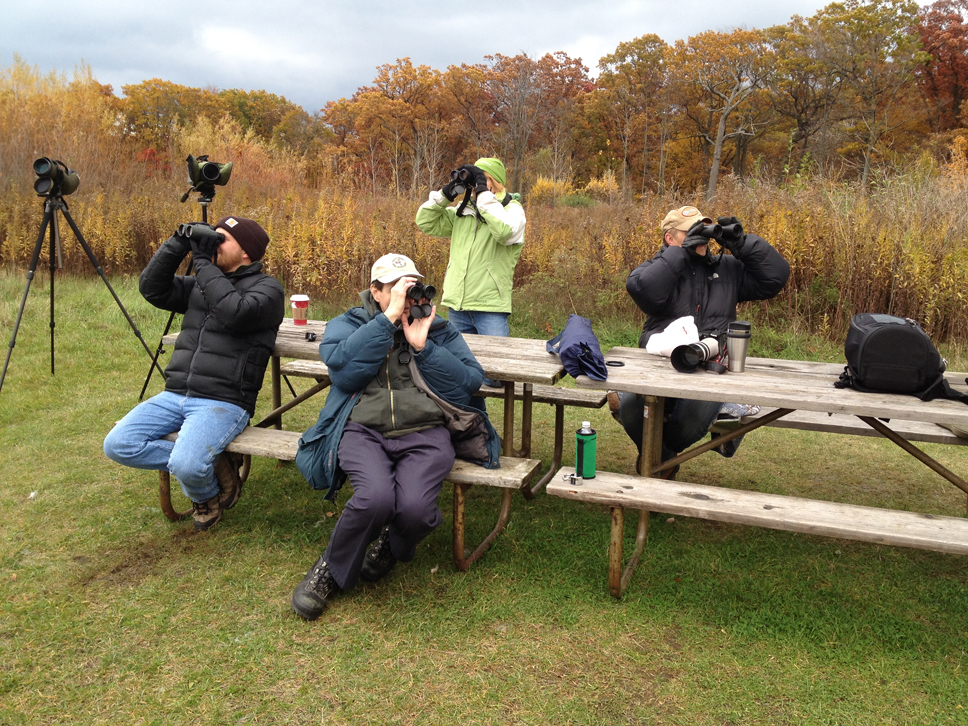 Watching for hawks and other raptors at the Fort Sheridan Preserve. Photo by Vic Berardi.

“What we were surprised to find was that we were getting anywhere from one and a half to three times as many birds as the hawk watch up at the beach, which is only 15 or 16 miles north,” Berardi recalled.

As of now, the group hasn’t collected enough data to make any suggestions as to why there might be more hawks soaring through Fort Sheridan versus Illinois State Beach Park.

During a good, full day (normally from 8am-4pm), the group may count anywhere from 200 to 300 birds. The best days, Berardi said, are ones that immediately follow a cold front with strong westerly winds. 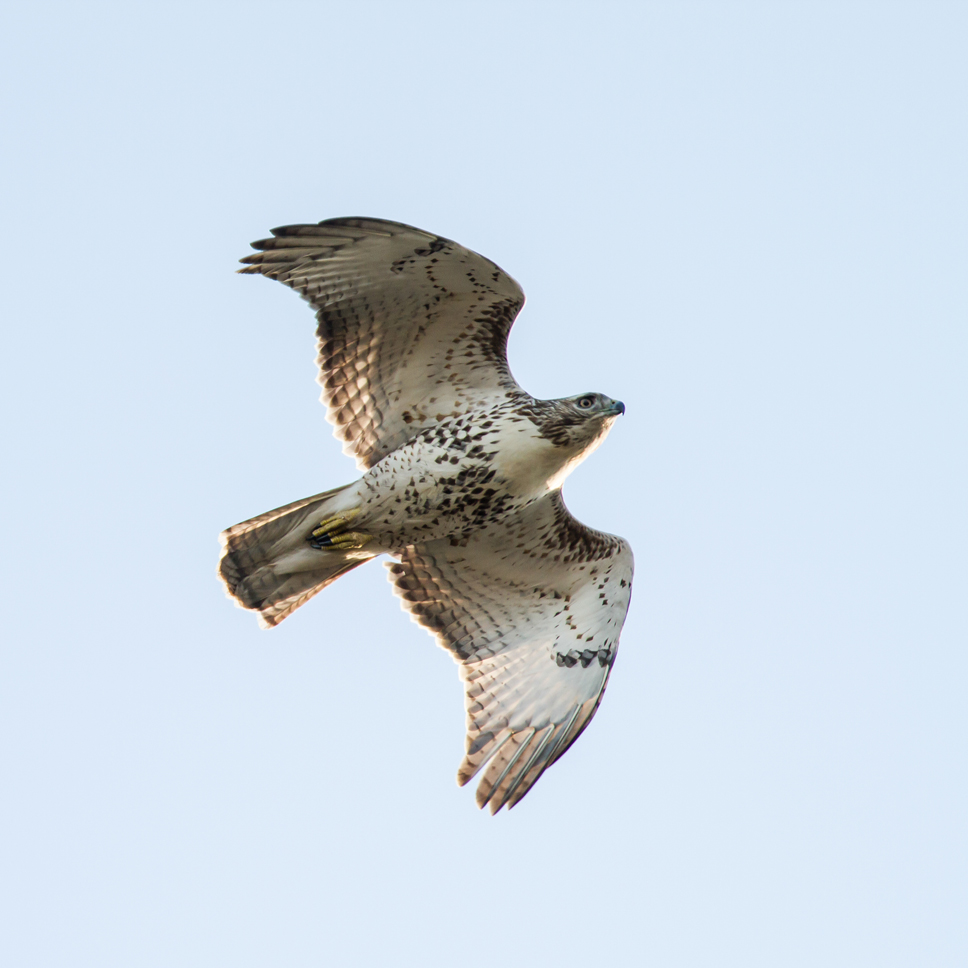 In less than the hour I was there, Furmanek picked up several hawks. Each time, he noted their proximate location for Berardi—by this or that tree, directly above a certain parked car—who then donned his binoculars and went about capturing it in his own sights. All the while, the two traded ideas about the possible identity of the hawk in rapid-fire succession, speaking in the type of abbreviated jargon that’s revealing to those involved, yet completely incomprehensible to the uninitiated. Once, Bernardi pointed to a seemingly untouched section of the sky and handed me his binoculars. I excitedly looked to where he was pointing, hoping to catch a glimpse of what he had seen.

“The average person is not going to be able to go [to a watch], look up in the sky, and see nearly as many hawks as a person with a pair of binoculars does, who also knows where and what to look for,” Berardi said. “There’s a level of skill involved with it.”

Despite several failed attempts, I failed to locate the hawk he had seen. Still, it’s easy—even for a laymen like me—to understand why it might be worthwhile to spend eight hours outside, on a cool November day, standing around with your head in the clouds.

“When you go to a hawk watch you’ve got an anticipation, and the mystery is whether or not everything you think you know is going to happen or not,” Berardi said. “It’s a spectacular thing to see unfold.”