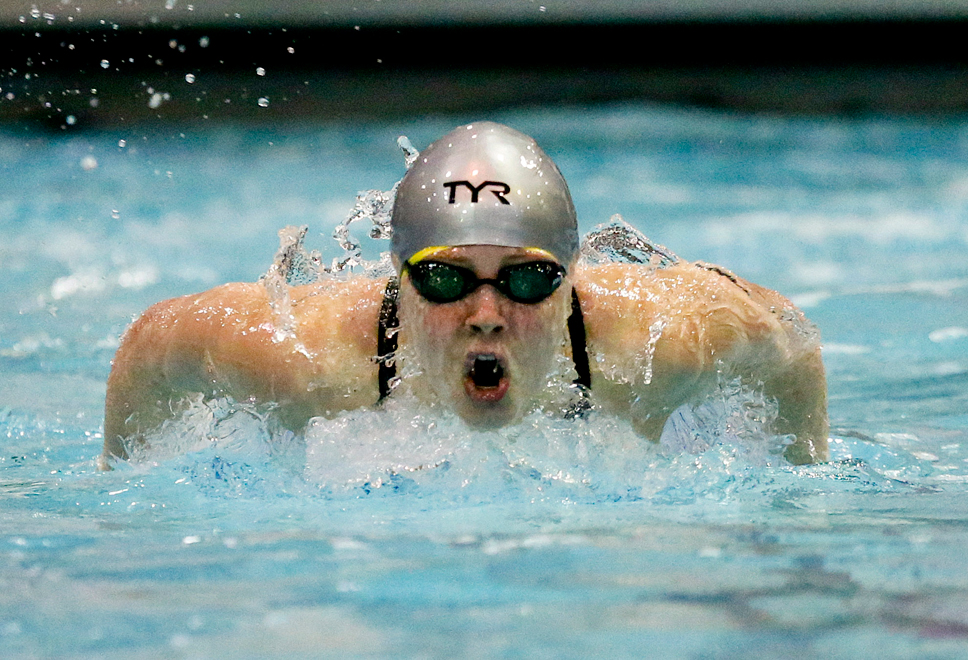 Reilly Lanigan of the Scouts drives to a seventh-place finish in the 100 butterfly at the state meet. Photography by Joel Lerner

The sport of swimming has the equivalent of a last-second shot that rims out in a tight basketball game.

It unfolded at the state swimming and diving meet at Evanston Township High School on Nov. 22. Lake Forest High School’s squad was in fourth place (88 points) — six points behind third-place Rosary — before the start of the final event (400-yard freestyle relay).

To leave the Wildkits’ natatorium with a state trophy (awarded to the top three teams), Lake Forest essentially needed either a win from its quartet or a disqualification from a crew representing either Rosary or Downers Grove North.

So close, so dramatic, so … cruel.

“Hard,” she added. “This was hard to take. But our girls stepped up, and that [400 free relay) was strong, really strong.”

Grevers had to also be heartened by a wonderful fact: None of the Scouts who swam on the second day of the state meet last weekend is a senior, with six of the eight having two more seasons of eligibility.

A right shoulder injury forced the Scouts’ tall water dart to miss more than half the season.

“My arms got weak because I could do only leg exercises for the longest time,” said Pyshnenko, third in the 50 free (23.18) at state last year. “While my teammates did pushups, I did squats.”

Pyshnenko juggled nervousness and excitement as she climbed the starting block for lane 4 in the championship heat of the 50 free. Next to her, in lane 3: Avery Braunecker, runner-up in the event last fall. The junior from Effingham proved too efficient, zipping her way to a first-place 22.99.

“I was hoping to go faster than I did, but Avery … she’s very fast,” Pyshnenko said, adding her right shoulder was about 95 percent healthy at state. “I’m not disappointed; I’ll take this [silver medal].”

Lanigan took home four more state medals to enhance a prep career that had been highly decorated (six state medals) before the start of her third varsity season. Lanigan finished third in the 200 IM (2:03.57), seventh in the 100 butterfly (55.96) and swam on a pair of top-four relays (200 free, 400 free).

“Our depth is great, a reason to be excited,” Grevers said “All the girls need is confidence going into next season, and they already have that.”

Notable: Lake Forest sophomore Ana Kohout swam in all four of the state races for athletes with disabilities on Nov. 22, finishing first in two events (100 breastroke, 200 free) and second in the other two (100 free, 50 free) in Classification A. She swam faster than her seed time in each of the 100 breast and 100 free races. … Woodlands Academy sophomore Caylee Hamilton — the first state qualifier in program history — placed 16th in the 100 butterfly (57.02) on Nov. 21, lopping 0.39 off her seed time. The Wildcat also tied for 31st place in the 50 free (24.51). … Scouts junior Carmen White finished 14th in diving (274.45 points) at the state meet, missing a finals spot (top 12) by 6.05 points. … Pyshnenko has already set her time goal for the 50 free in 2015. “I will train hard to get under 23 [seconds],” she said at last weekend’s state meet. … Loyola Academy’s state championship last weekend marked the program’s first and halted New Trier’s streak of state titles at four years. The Ramblers’ best previous state finish was their runner-up showing under former coach Dennis Stonequist in 2010.