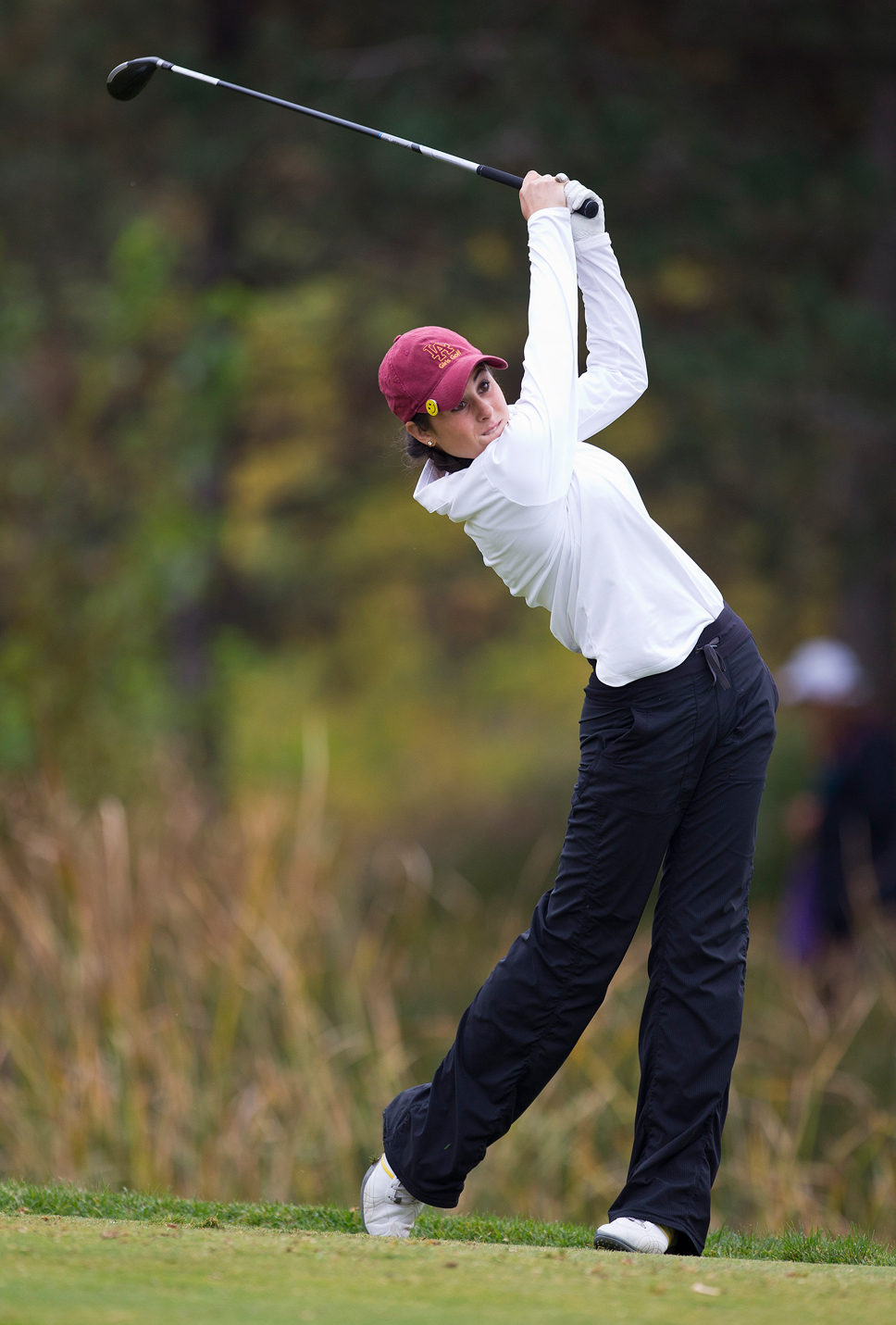 When Blake Yaccino lived in Sarasota, Fla., for nine months before enrolling as a freshman at Loyola Academy in 2012, she did what most golf enthusiasts do when they call the Sunshine State home:
She played golf, every day — as long as a hurricane wasn’t threatening to suddenly turn 18 flagsticks into 18 skinny projectiles.
While attending Saint Stephen’s School in nearby Bradenton, Yaccino took golf lessons from Grant Price — nephew of three-time major winner Nick Price and coach of rising LPGA star Jessica Korda — at IMG Academy. Grant Price had suffered serious injuries in a car accident, halting his career as a tour player but not as an exceptional instructor.
“He’s an amazing guy, such a positive person after all he went through to recover,” says Yaccino, adding the golf instructor is also a recent cancer survivor. “I used to get frustrated when I played golf. But I no longer do because of the perspective I got from being around him. I wrote about him for my Loyola entrance essay.
“The mental part of my golf game is stronger because of him.”
That part came in quite handy — as did the junior’s talented part of her game — at last month’s Class AA state tournament at Red Tail Run Golf Course in Decatur. Yaccino shot a 75 on the second day of the 36-hole event (after a round of 80) and finished in a tie for eighth-place, earning all-state honors and pacing the Ramblers’ second straight runner-up showing.
LA was in fourth place after 18 holes but vaulted over Wheaton Warrenville South and New Trier on Oct. 18. LA bettered WWS and New Trier by 14 and 12 strokes, respectively, on the second day at the par-72 course. Yaccino carded back-to-back birdies on the front nine and made par on six of her final seven holes during the second round.
“She’s a gamer … just look at how well she performed for us on the second day at state,” says freshman teammate Nina Rutkowski (13th-place tie at state, with a 78-79). “Blake has a really good swing, a really powerful swing. But her mental game is just as strong.
“When she gets mad,” Rutkowski adds, “it’s for only 10 seconds, if that. She gets over it, moves on, gets back to being positive.”
After making the varsity golf team as a freshman and befriending former LA standout and current Dartmouth freshman Isabelle Kane, Yaccino emerged as the team’s No. 4 scorer at state as a sophomore. The Kenilworth resident and former ice hockey player led LA with a sub-40 average for nine holes this fall and shot a 70 in a practice round at Bittersweet Golf Club in Gurnee — the day after homecoming.
“Blake is a consummate competitor,” says Ramblers coach Jim Jackimiec, whose 2014 state team did not include one senior. “She plays with emotion, and when she gets in her zone, the focus is impressive.
“Blake,” he adds, “always practices with a purpose. She finds a part of her game she’s not happy with and then spends as much time as necessary working on that element until she is satisfied with the results.”
Yaccino broke 80 twice last summer. But 12 was the number of the day when she returned home after winning a summer tournament and received exactly that many roses from one of her proud brothers, Xander.
Xander is a second-grader.
“That was sweet,” she says of the moment in the Yaccino’s kitchen.
In Loyola Academy’s cafeteria shortly after the start of the golf season this fall, Rutkowski crossed paths with Yaccino.
“Hey, girl!” Yaccino said to her freshman teammate then.
The greeting thrilled Rutkowski, who, at that point of the school year, felt way more comfortable on a fairway than she did on any floor in a foreign building containing too many unfamiliar faces.
“The day before,” Rutkowski recalls, “she congratulated me with a knuckle punch after I made a putt. I barely knew Blake when I saw her [in the cafeteria] that day, but she made me feel like we’d known each other for years with her smile, her energy, her big personality. Blake is good at winning people over.”
For three years, beginning when she was a fifth-grader, Yaccino wanted to win something fairly big after turning 35 years old: the U.S. Presidency.
“I was mad [in 2008) when I found out Hillary Clinton was running for president, because I was worried she would become our country’s first female president,” Yaccino says, smiling. “That’s what I wanted to become. But I’ve also thought of becoming a plastic surgeon or maybe a banker.”
For now, she’s perfectly content with her life as an accomplished golfer, an avid reader (S.E. Hinton’s “The Outsiders,” published in 1967, is one of her favorite books) and a grateful daughter of David and Christine.
“My mom and dad … they’ve been so supportive of my commitment to golf,” says Yaccino, whose other siblings are brother Cooper (a seventh-grade golfer) and sister Keegan (a freshman varsity tennis player at Loyola Academy). “My dad [a former lacrosse player at Dartmouth] loves golf, and he putts well, like Cooper does. My mom — she takes me to all of my golf events. She also tells me to look around and appreciate the nature and beauty of golf courses when I’m playing a round.
“That helps if I’m feeling stressed,” she adds. “When I look at trees, I calm down.”