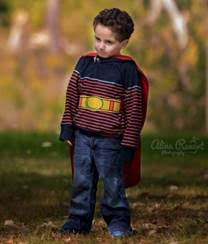 NORTHBROOK—It turns out that even superheroes aren’t immune to the struggles of everyday life: Superboy has leukemia.

As he awaits a bone marrow transplant, the resolve of this Buffalo Grove four-year-old has prompted his family and super friends to celebrate his courage—and raise awareness for other children battling this disease— with a blood drive and bone marrow registry drive from 8 a.m. – 2 p.m. on Saturday, Nov. 30, at Northbrook Fire Department, 740 Dundee Road, Northbrook.

The drive is co-hosted by Chicagoland blood supplier LifeSource, and national bone marrow registrar, Be The Match.

Since mid-October, Bennett Vulykh has been wearing a red cape around his neck since his return from Lurie Children’s Hospital after multiple rounds of chemotherapy, antibiotics and blood platelet transfusions to treat his leukemia. He wears the cape in tribute to Superman, his favorite super hero.

The prop is actually part of the Halloween costume that his grandmother created for him. But the way this little boy has magically connected with this cape—and the strength it represents—is an inspiration to everyone he meets.

“Bennett wears that cape everywhere,” his mom, Enna, relates. “Even in the hospital.”

Last May, Vulykh was diagnosed with Acute Myeloid Leukemia (AML), a disease that causes his bone marrow to produce abnormal white and red blood cells, and platelets. A day after his diagnosis, he began chemotherapy at Advocate Lutheran General Hospital. For the next four-and-a-half months, the youngster underwent four, grueling rounds of chemotherapy, and multiple blood and platelet transfusions.

As we give thanks this holiday season, please consider participating in the drive!

From the Northbrook Fire Department