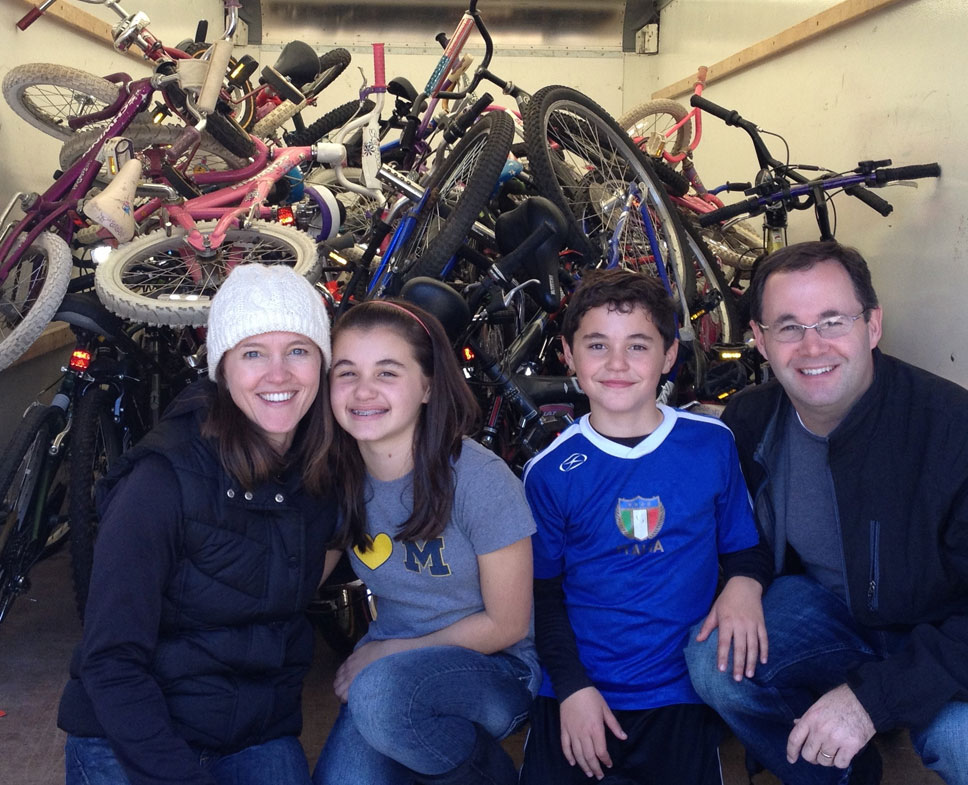 Photography provided by the Basil family

When Nicole Basil of Wilmette received a new bicycle in third grade, she, her brother, and her parents started looking for a charity to donate their used bikes.

“We couldn’t find one, so I said, ‘Why don’t we start our own charity?’” says Basil, now a 15-year-old freshman at New Trier High School. “My little third-grader mind just blurted that out.”

Seven years later, the charity she named Pedal Power is still going strong. On the first Saturday each November, it accepts bicycle donations from 9 a.m. until noon at drop-off points along the North Shore. The first year, Pedal Power only featured one location for drop-offs, Basil’s elementary school in Wilmette. Now, the drop-off points include bike shops in Winnetka, Northbrook, Highland Park, and a Home Depot in Evanston that accepts donations year-round.

After receiving 250 bikes the first year, the family wanted to put them to good use. Corresponding with the Chicago Public Schools (CPS) administration, they were directed to one school in particular that serves the children of low-income families. On the day of the annual bike drive, the Basil family rents a truck, retrieves the donated bikes, separates the ones that are in good condition and takes them to the Cesar E. Chavez Multicultural Academic Center Elementary School on the South Side. The bikes are presented as rewards to children who make the honor roll.

“We get invited to some of the honor roll assemblies,” Basil says. “One of the first years, the kids didn’t know about the bike winnings yet, and they hid them behind a divider screen in the room. They called up all of the kids who were on the honor roll, and they opened up the screen and said, ‘All of you get a bike.’ They were so excited.”

Thanks to a grant from the Evanston Bike Club, the Basil family is able to make sure each child who receives a bike also receives a helmet.

Basil isn’t the only member of the family dedicated to Pedal Power. Her parents help collect the bikes and deliver them on the day of the bike drive, and her 13-year-old brother Bennett manages Pedal Power’s social media presence as well as its website, gopedalpower.com.

Each year, Pedal Power receives bikes that are in poor condition, but they still put them to great use. CPS directs them to the Northside Learning Center, where students with cognitive disabilities receive both an academic education as well as vocational life skills, such as bike repair and maintenance, using the donated bikes. No matter how damaged the bikes, they can help a child learn a practical trade that they can apply for the rest of their life.

Says Basil, “My philosophy is — a bike can take you far, but good grades can take you further. [Cesar E. Chavez] recently showed us their test scores, and they’re now ranked the No. 1 school in their district.”