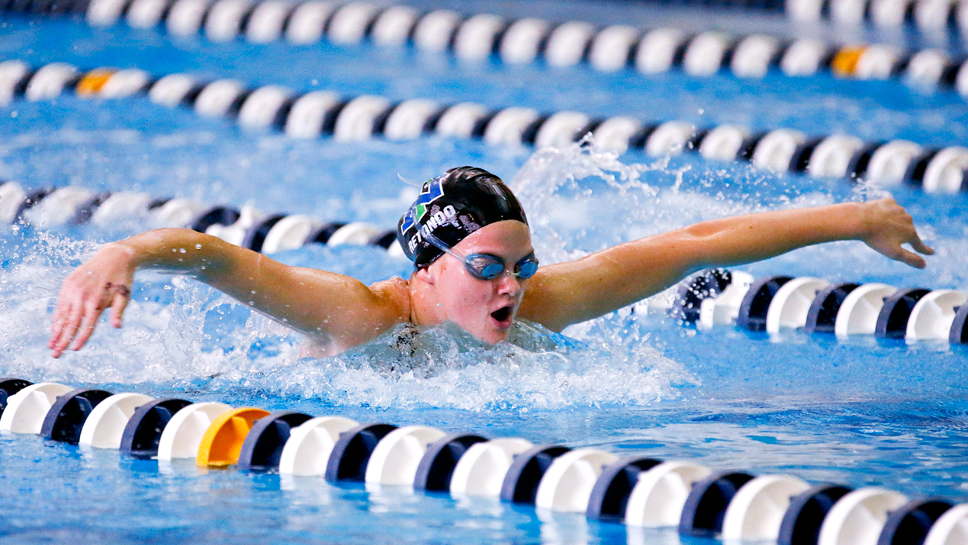 Do you know where your favorite swimmer is?

Probably in bed, in a deep sleep.

“That’s me,” New Trier senior swimmer Nicole Retondo said after the Niles North swimming and diving sectional Nov. 15. “Swimmers … we get tired when we get home after practice.

Retondo likely had a tough time sleeping after a sectional meet last fall — after missing the state-qualifying cut in the 200-yard IM.

The same Nicole Retondo had finished sixth in the event at the state meet in 2012, helping the Trevians capture a third straight state championship.

“Big-time kudos to Nicole,” Trevians coach Mac Guy said. “And she still [is not fully tapered].”

A leg on a pair of top-five relays (200 and 400 free) at state last fall, Retondo started swimming at the age of 6. She took to water like a duck takes to a seat behind the handlebars of an all terrain vehicle.

“I wasn’t very good back then … didn’t like swimming very much,” Retondo recalled. “It wasn’t until my freshman year that I felt I was pretty good at it.”

Conley led the highly competitive field of plungers after six dives, upping her total to 272.5 points after garnering a trio of 9s and a couple of 8.5s from judges following her reverse pike.

University of Florida-bound Katie Rourke of Loyola Academy surpassed Conley on her eighth dive and ended up with an impressive aggregate of 531.6 points.

“I reminded myself, ‘I know what I’m doing; I have done these dives a million times,’ ” said Conley, a Glenbrook Aquatics club member like Stern. “Doing that helped me relax.”

Stern, meanwhile, relied on a similar tactic throughout an 11-dive test that lasted nearly two and a half hours.

“I stayed positive,” she said.

Some 90 minutes after the diving session, negativity threatened to throttle NT’s swimming Trevs after the squad’s 200 medley relay swam slower than the state cut (1:49.77) and had to settle for fifth place (1:50.32). But Guy’s group of girls regrouped nicely and collected 14 more state berths.

“I like our prospects [for the state meet],” Guy said minutes after the sectional’s last race, in which his 400 relay crew of Retondo, junior Julia Green, sophomore Mia Haggerty and senior Brittany Bishop (anchor) combined for a state-qualifying time of 3:35.24 (fifth place).

NT junior Morgan Conley placed third in the 50 free (24.11) and also qualified for state as the lead-off leg of the third-place 200 free relay (1:36.76, with Retondo, Bishop and sophomore Lydia O’Connell).

Haggerty sped to NT’s other top-four effort, clocking a fourth-place and state-qualifying 1:54.16 in the 200 free.

Notable: One of the most relieved Trevians after a race at last weekend’s sectional had to be Green. Her time of 5:10.04 in the 500 free got dangerously close to the state cut (5:10.14) in the event. Green had entered the grueling race with a seed time of 5:15.52. … Green touched 11th (1:52.97) in the 200 free at the state meet last fall. … Bishop and Retondo swam a leg on each of the 200 free (1:36, third place) and 400 (3:29, fifth) free relays at the 2013 state meet. … The last girls swimming and diving team to win more than four consecutive Illinois state championships was St. Charles, which captured six in a row from 1994-1999. Rosary enjoyed a run of four straight state titles (2006-09) before NT started its string of four straight state championships in 2010. … Glenbrook South’s Keith MacDonald was named Niles North Sectional coach of the year. … Retondo is thinking of majoring in either psychology or marine biology. One of the schools on her list is Miami of Ohio. … As a sophomore two years ago, Retondo swam on a relay with three seniors at the state meet. The 400 free unit of Retondo, Campbell Costley, Jessica Sutherland and anchor Stephanie Marchuk finished third in 3:28.45.

Giants divers Erin Cullather and Avery Spitz get to travel to Evanston this weekend after qualifying for state as at-large entrants at the Niles North sectional meet on Nov. 15.