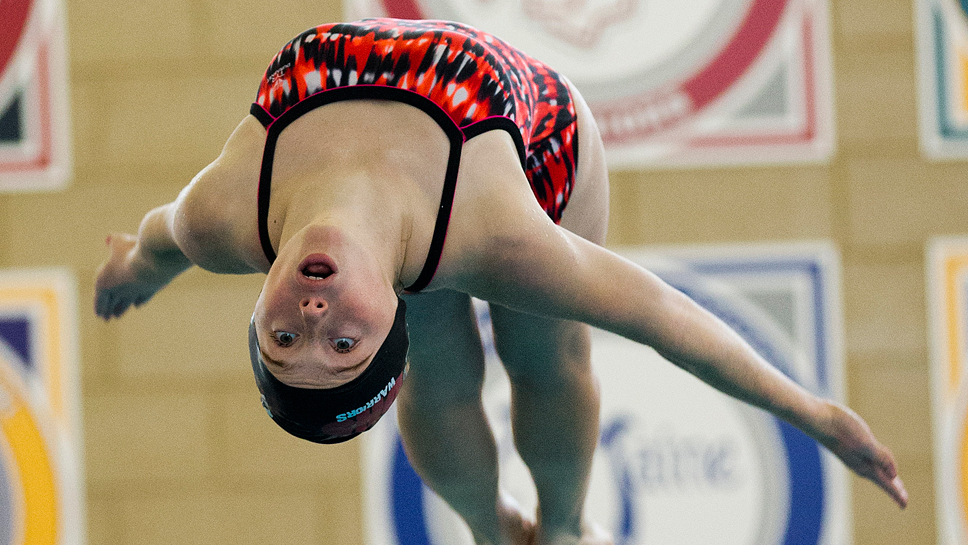 Ruby Powell held a small plastic cup of water in each hand as she walked briskly to receive a first-place medal at last weekend’s Niles North swimming and diving sectional.

To the victor goes the … roiling liquid.

The Deerfield junior and Texas Christian University recruit sped to an impressive 56.15 in the 100-yard backstroke, bettering her seed time by more than two seconds and topping the state’s reigning runner-up in the event (Loyola Academy senior Libby Jardeleza, 56.52).

Powell’s time in the event ranks first among all state qualifiers.

“I felt I hit all my turns and [performed well] underwater. The hard work and tweaks in technique I made [under Deerfield coach John Sullivan] — all helped today; everything came together.”

Sullivan’s one-word reaction to Powell’s significant time drop in the 100 back: “Huge,” he said.

“Smart girl … and she’s a smart athlete,” Warriors diving coach Doug Foerch said of the reigning Central Suburban League North champion. “I’d bet she knows more about the rules of diving than some diving coaches know. And she’s still a ‘baby’ in the sport.”

Guare only started diving competitively last year, making the Warriors’ state series team but falling short of the cut-off mark after five dives at a sectional.

“Confidence and experience,” she said of factors that helped her advance to state this fall, before heading to Marengo for the second leg of her busy day on Nov. 15.

Guare — blessed with power and finesse off the boards — is also a member of Allegiance, a youth color guard program that rehearses each weekend in Marengo when it isn’t competing.

“I don’t know much about color guard,” Foerch said, “but if Lindsay is involved, she’s probably very good at it.”

“Lindsay and I motivate each other … we’re pretty similar divers — and we’re really competitive,” said Linton, also a gymnast and pole vaulter at Deerfield.

Notable: Christina Loukas’ famous name resurfaced at the Niles North Sectional after Loyola’s Rourke amassed 531.6 points to win the diving segment Nov. 15. Loukas — the former star diver at Deerfield (’04) and two-time U.S. Olympian — won the 2003 state diving title with a meet-record 507.55-point total. She also topped the state diving fields in ’01 and ’02. Now 28, she finished eighth (3-meter springboard) at the 2008 Olympics in China and ninth in the same event at the 2012 Summer Games in London. … Deerfield finished runner-up (314 points) to Glenbrook North (382) at the CSL North swimming and diving meet at Niles North Nov. 8, getting championship efforts from Guare (diving), Powell (50 free, 100 back) and the 200 free relay (Powell, Tsakiris, Lily Kurzydlo and Lauren Kurzydlo). The victorious relay edged a Glenbrook North quartet by four one-hundredths of a second.