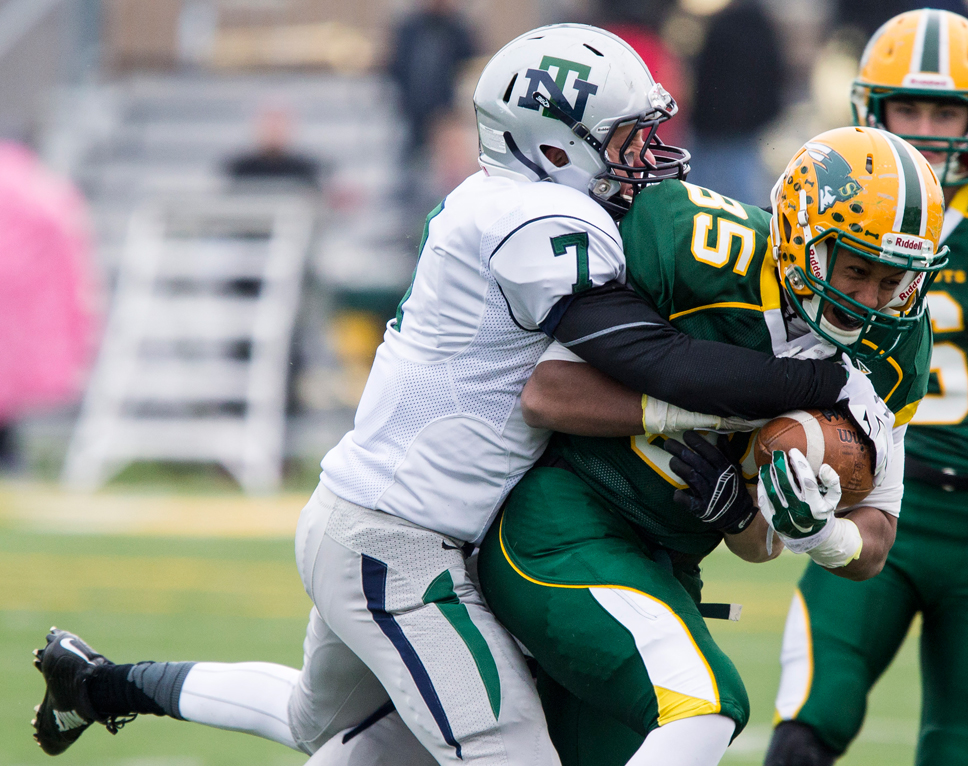 The 12-0 Patriots were able to do what mononucleosis could not — end Francke’s football career.

Francke’s return might have ended in a Class 8A state quarterfinal loss on Nov. 15, but rest assured it was noticed and appreciated by his Trevians teammates, who stood tall against Stevenson until the roof caved in late in the first half.

“At practice on Wednesday, I show up and all of a sudden I see Will in his practice jersey ready to go. I asked, ‘What’s going on?’ ” said teammate Andrew Hauser, the Central Suburban League South co-defensive player of the year. “It was a big surprise, and it was a big emotional boost for the team.”

Francke had last played Nov. 1 in the Trevians’ first-round win over Glenbrook South. The following week started with Francke out of school with flu-like symptoms. The Friday morning before the second-round game with Curie, blood work came back confirming Francke had mono.

“I thought I had played my last high school football game,” said Francke, an all-CSL South selection who made three tackles against Stevenson. “That was tough for me. But when I got cleared, I couldn’t be more excited to have another opportunity to be out here with my friends doing what we love.”

After his physician determined his spleen had not swelled, Francke was given the green light to play.

“I didn’t think it was real when he texted me Wednesday morning that he was coming back,” New Trier first-year coach Brian Doll said. “When I saw him, he had a doctor’s note that he was cleared. I’ve never had a kid with mono play, and we were thrilled to have him back for us.

“And,” the coach added, “he did an unbelievable job.”

The return could not have come at a better time as New Trier was without starting linebacker Joe Lewis, who broke his forearm late in the Curie game. In Stevenson, the Trevians (10-2) had to prepare for the top-seeded team in Class 8A.

“That’s our defensive leader,” Doll said of Francke. “It would have been really hard without him in a lot of different situations, because he really knows all the calls and the check-offs.”

Despite the 38-10 score, New Trier’s defense stood out early, forcing some key turnovers and keeping the team in the game as the offense tried to find its rhythm. A first-quarter interception — and 40-yard return to the Stevenson 7-yard line — by Nick Krauskopf set up a chip-shot 21-yard field goal by Nick Endre to give the Trevians an early 3-0 lead.

On the next drive, New Trier nearly took the ball at midfield thanks to an apparent forced fumble by Hauser, but the officials ruled that Stevenson’s Willie Bourbon was down. Later on, New Trier’s Steve Salinas was able to strip the ball from Bourbon at the NT 1-yard and linebacker Tim Fox (five tackles) recovered.

“We were feeling good after the first quarter,” Francke said. “We were forcing the ball loose, but the calls didn’t go our way. We just lost the energy in the second quarter.”

Stevenson scored three times in the second quarter thanks to two interceptions by James Mahoney inside New Trier territory.

New Trier’s offense struggled as sophomore quarterback Clay Czyzynski (8-for-22-2, 127 yards) tried to shake off a hip injury, but he was pressured all afternoon. He eventually gave way to senior Will McCain, who drove the Trevians down the field in their final offensive drive. With less than a minute left in the game McCain found Scott Hammes for a 10-yard touchdown pass.

“I was happy for Will McCain,” Doll said. “It was a good moment for him to end his senior year.”

Notable: Hammes finished the game with three catches for 43 yards, while senior running back Kevin Mulhern rushed 13 times for 45 yards.

Krauskopf not only had the pick, but he also finished the game with five tackles. Nick Blach had six tackles, while Charlie Schoder added three stops.

Right tackle Jack Palmer, who suffered a leg injury in the Curie game, started the Stevenson game. However his injury flared up again, and he came out early.

“Our kids at the end of the game cared so much for each other that they were running around asking if every senior had gotten in,” said Doll, a New Trier graduate. “They wanted to end on a positive note.”

“Coach Doll made a world of difference this year,” said Hauser, who had three solo tackles to go along with a quarterback sack and tackle for loss. “New Trier football is moving in the right direction.

“If these juniors and sophomores keep working in the weight room, they’ll have even more success than we had this year.”