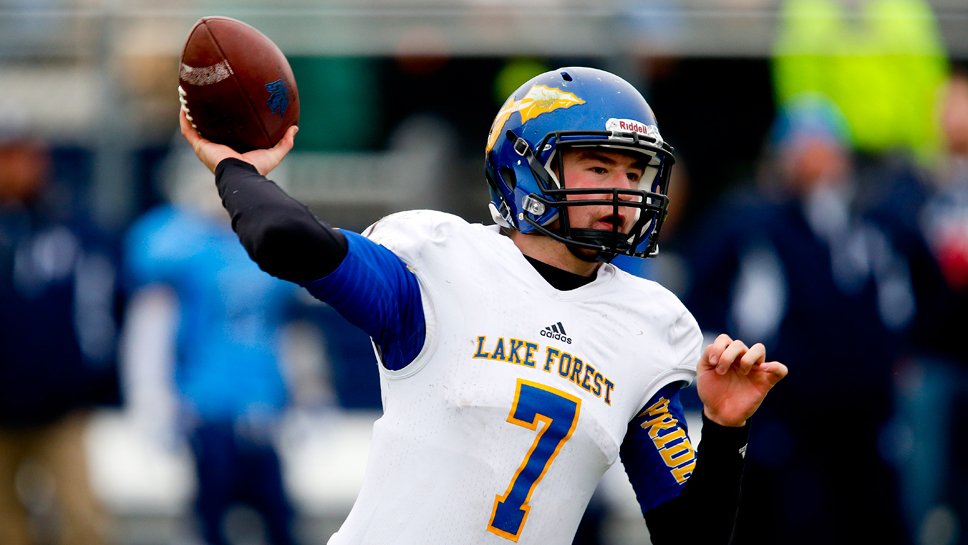 But no one questions the tough blow the Scouts sustained on the 17th play of their Class 6A state quarterfinal game against host Nazareth Academy on Nov. 15.

There was an eerily identifiable hush along the LF sidelines, when three-year starter Jack Traynor — the heart, soul, spirit and might of this 8-4 squad — suffered a knee injury.

The 6-foot, 224-pound senior inside linebacker was forced to watch most of Saturday’s 54-24 loss from the sidelines. On crutches.

“You could tell that a big presence (on defense) was missing,” stated Lake Forest senior Virgil Young. “It always helps to have a guy like Jack on the field.”

“Losing him was huge,” Scouts head coach Chuck Spagnoli added. “And I just feel terrible for him.”

Reconciling a season-ending defeat is never easy — especially when the Scouts’ arrow was pointing way up.

“We didn’t get here (state quarterfinals) with smoke and mirrors,” said Spagnoli.

Seeded No. 13 in the Class 6A upper bracket, the Scouts averaged 42 points per game in their two upset wins over No. 4 Belvidere and No. 5 Glenbard South.

But getting past No. 1 Nazareth (12-0) proved to be a little too steep. The Roadrunners, who had the word “Family” stitched across the back of every royal blue jersey, simply are a united bunch playing at a different level.

“I wouldn’t be surprised if they wind up winning the whole thing,” Spagnoli said.

For starters, just check out No. 7.

Junior quarterback Danny Carollo put together a terrific postseason. In the three playoff games, the 6-2, 202-pounder completed 42 of 75 passes for 632 yards with six touchdowns.

How does Week 1 compare to Week 12 for Carollo?

Carollo was at his all-time best against Nazareth. He threw for 268 yards (18-for-30) with no interceptions. Nine of his strikes went for 10 yards or more,

“He’s got everything you want in a quarterback,” DeWald said. “He’s athletic. He’s tough. He runs well. And he throws the heck out of the ball. He can throw it 60 yards.

“He’s still learning the concepts of the game,” DeWald added. “But you never stop learning those.”

He’s got an edge over most area QBs. The Carollo family is Quarterback U. The lineage at that position is quite remarkable.

His brother, P.J., is a former signal caller at LFHS, who played two seasons at Northwestern. His dad, Paul, lined up behind center for the University of Wisconsin-La Crosse, while his uncle, Bill, a former NFL official and current director of officials for the Big Ten conference, also was a college QB.

“Danny’s been throwing it for a while,” said DeWald.

He has tutors aplenty.

“P.J. will be up in the stands at our games, and afterwards he’ll come down and critique Danny,” DeWald said. “And like any brother would do, he’ll let him know that he missed a read or that he should have done this or that. And he’ll do it in a positive way.

“I had some (throwing) sessions with him last offseason,” said Carollo, who also plays basketball at the school. “I’m hoping to do that again this offseason.

Carollo’s toughness is undeniable. He sustained a dislocated finger on his right throwing hand near the end of the regular season.

He reinjured that tender digit late in the first quarter against Nazareth and came out for all of … one play.

The injury didn’t keep Carollo from showing off his big arm. He unloaded a 49-yard touchdown pass to senior wideout Mateo Hargitt with 4:29 left in the first half.

“That (TD) pass was a sideline route, and Mateo made a great catch and run,” said Carollo. “He’s a real special guy to have on your team. He was a hot receiver (in the playoffs), and we tried to get the ball to him as often as we could.”

Against Nazareth, Hargitt’s totals were off the charts: six catches, 182 yards. The Carollo and Hargitt duo also connected on a pair of 42-yarders.

And that last 42-yarder to Hargitt late in the fourth quarter was every bit of 60 yards, considering that Carollo scrambled to his right and threw across his body to the other side of the field.

His other “hot” receiver was senior Michael Christensen. This stereotypical possession-receiver hauled in six passes for 45 yards against the Roadrunners.

“Michael has great hands,” Carollo said. “He made things easy for me.”

In the playoff run, Hargitt made 12 catches for 359 yards and 4 TDs, while Christensen caught 13 passes for 116 yards.

“The three of us figured each other out,” said Carollo.

No doubt, one of Carollo’s favorite targets in the future figures to be 6-2, 184-pound junior Brian Doherty. He earned the respect of his coaches and teammates, when he caught a difficult 24-yard slant pass at the Nazareth 2-yard line after dropping a potential TD pass two plays earlier.

“He’s big, and he’s got good hands. He’ll be a good guy to have around,” said Carollo. “But we’ve got a lot of good receivers coming back. It’s a good situation.”

Carollo, who was sacked three times for 36 yards against Nazareth, says the same thing about his offensive line. The Scouts’ O-line was loaded with talented and experienced seniors in Thomas Kennedy, Jack Boyd, John McArthur and George Kohl III.

“It was a lot of fun playing with these guys. They played hard,” said Carollo. “Two of those sacks were my fault. I was scrambling a little too much. I got a little too confident in my speed.” 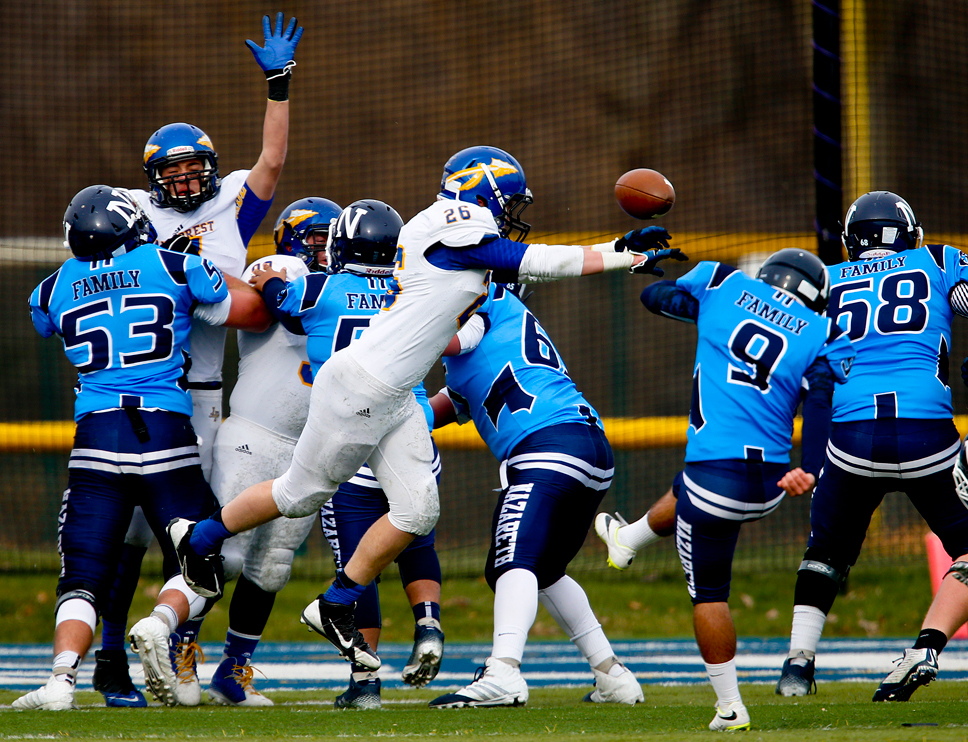 Notable: Before leaving the game with the knee injury and his team trailing 7-0, Traynor was making his usual impact. In two-plus defensive series, he had three tackles and a forced fumble … Traynor wasn’t the only key LF player to go down. Defensive lineman Jaxon Mills missed the second half with a lower body injury. Both had MRIs on Monday. … Junior outside backer Francis Nicholson was sidelined with a concession. … Sophomore outside linebacker Cal Wonham definitely is a player to watch in coming seasons. The 5-10, 177-pounder finished the game with five tackles to go along with a fumble recovery and blocked PAT attempt. … Junior Matthew Clifford wound up leading the team in tackles with eight. Nicholas Athenson and Harry Larson had six stops each, while Gabe Funk and Jonathan DiValerio had five tackles apiece. … Running back Wes Janeck ended the game with 60 yards on 22 carries but got into the end zone (2-yard run). … Star placekicker and starting cornerback Kyle Gattari was first to put the Scouts on the board with a 44-yard field goal with time expiring in the first quarter.