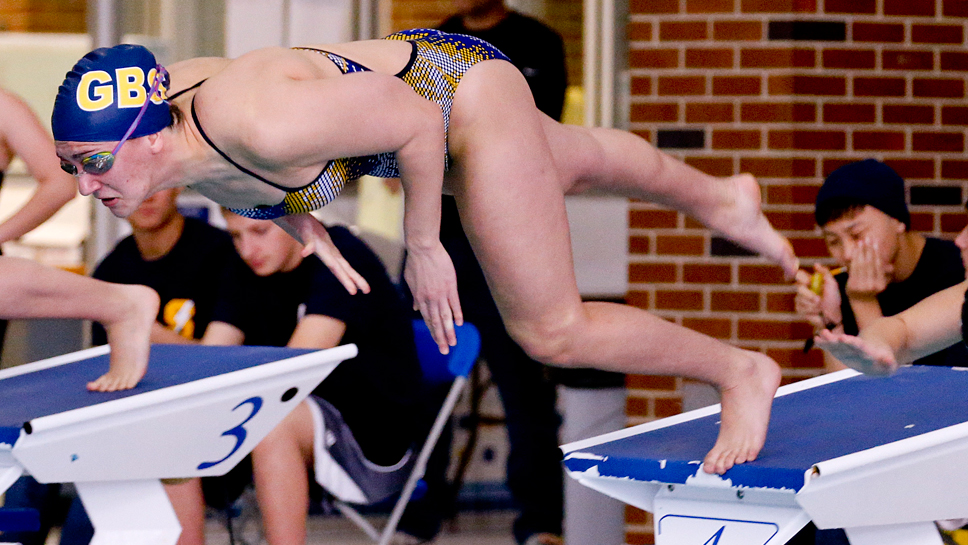 The decibel level of Katie Wells’ cough at a sectional swimming and diving meet last weekend fell somewhere between that of a foghorn and a freight train.

The Glenbrook South senior attempted to muffle the noise by coughing into her right elbow between races at Niles North Nov. 15. But Wells’ intermittent barks could still be heard — by people living along the Eastern seaboard.

“It was not that bad at the beginning of the meet,” Wells said. “It got worse as the meet went on, and I buckled down. I did get tested for whooping cough before today; that came up negative.

Wells still found ways to have a very good meet, qualifying for the maximum four state berths. Shortly after helping the Titans’ 200-yard medley relay win in a blazing 1:45.44 — which ranks fourth among all state qualifiers — she touched first in the 50 freestyle (23.65). The University of Iowa-bound Wells later swam a leg on a state-qualifying 200 free relay (1:36.37) and advanced to state with a runner-up time of 1:05.48 in the 100 breaststroke.

“She certainly likes to get jacked up,” Glenbrook South coach Keith MacDonald said, referring to Wells’ on-deck demeanor as a racer and as a teammate. “Katie really likes the team aspect of the sport.”

MacDonald could not have asked for a better start to the swimming segment of the sectional than the one he got from his medley crew. Senior Diana Capota served as the relay’s lead-off leg, followed by Wells, senior Kelly Cordes and junior Constance Chrones.

“Amazing, real inspiring, tremendous swims by all four,” MacDonald said minutes after the four received their medals. “What an exciting way to start a meet.”

Cordes gave her coach another reason to beam more than hour later, clocking a first-place 51.82 in the 100 free — from the penultimate heat. The Fairfield (Conn.) University recruit had entered the sectional with a seed time of 54.26.

The victor in the fastest heat in the 100 free, Glenbrook North senior Abigail Rosenberg, had to settle for runner-up honors (51.98).

Cordes’ winning time ranks eighth among all state qualifiers in the event.

Perhaps the only regret for the ailing Wells on the day of the sectional was not being at full strength to fully whoop it up for Cordes at the conclusion of the race.

“I have fun and I like to get into the team because it’s such a great group, really close and so friendly,” the fun-loving-to-the-nth-degree Wells said. “One of my roles is to make sure everybody is into it at all times — from varsity to the freshman level. I like to keep everybody’s spirits up.”

Wells anchored the runner-up 200 free relay at the sectional, following legs from senior Georgia Kotsinis, Cordes and Capota. Capota also advanced to state in the 100 butterfly (sixth place, 57.74) and as a member of the 400 free relay (sixth, 3:35.54, with sophomore Sam Casey, Chrones and Cordes).

Titans senior Christina Coleman extended her season by a week with a 10th-place showing in diving (386.45 points, enough for an at-large state berth).

Notable: MacDonald was named Niles North Sectional coach of the year, and Loyola Academy’s Tony D’Amico earned the sectional’s diving coach of year honors. … Glenbrook South finished 11th (52.5 points) at last year’s state meet behind Wells’ top-five efforts in two individual events (tied for fourth place, 50 free; fifth, 100 breast). She also swam on the Titans’ fourth-place 200 free relay and eighth-place 200 medley relay. … Wells won the 50 free (24.43) at the Central Suburban League South meet in the home water Nov. 8, halting New Trier’s event winning streak that day at four. GBS finished third (258.5 points) behind Evanston (363) and champion NT (489). … Wells, on her decision to attend Iowa: “The coaches there were amazing, and they made me feel like I was a part of the team right away.” She plans to take courses in the school’s Department of Human Health and Physiology. “I might narrow it down from there,” Wells said. … Titans swimmers chanted the memorable chant from the movie, “Remember the Titans”, before the start of the Niles North Sectional last weekend.