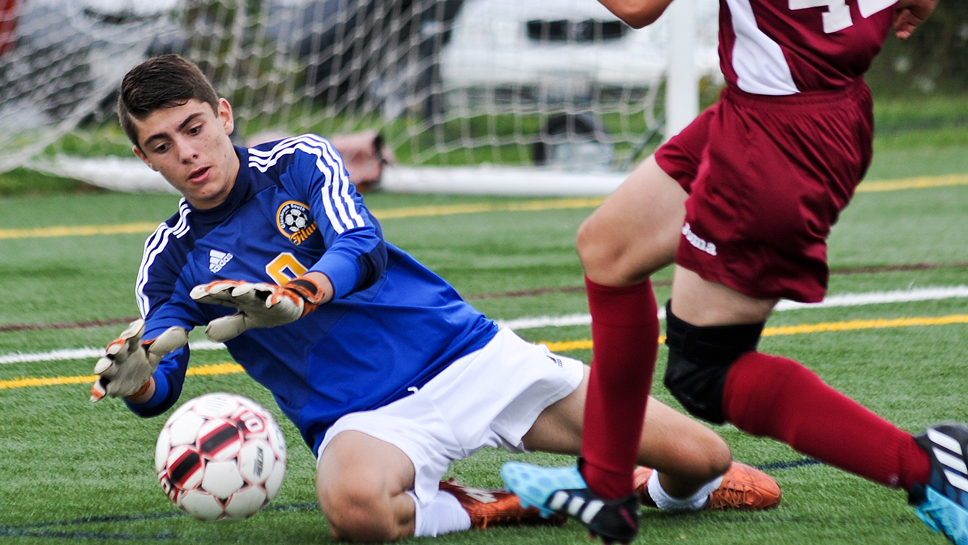 The Glenbrook South booster club might want to consider taking up a collection to repair the basement of Dean and Sue Adamopoulos.

After all, the space has been a breeding ground for two standout Titans goalkeepers, the Adamopoulos’ two sons George and Perry. George was between the sticks for GBS in 2007 and 2008, while younger brother Perry just completed a memorable junior campaign for the Titans (8-8-4), his second season as the team’s No. 1 keeper.

Perry, who is 6 ½ years younger than George, said he has many childhood memories of playing soccer in the basement, trying to stop shots taken by his brother, whom he said was a mentor and the reason he became a goalkeeper in the first place.

The basement still bears the scars of these sessions.

“The ceiling is broken in a couple places, there are dents in the wall and one of the shades is messed up. But it was all for a good cause,” Perry said.

This fall, Perry had a breakout season for Glenbrook South. He was named Team MVP, earned all-conference honors and, according to Titans first-year head coach Seong Ha, narrowly missed being named all-sectional.

“Perry kept us in many games. Sometimes you saw his own teammates astonished; he made saves that just made jaws drop.” said Ha, the long-time girls head coach and a former boys assistant. “It was a rebuilding year for our team, and we went beyond expectations. Perry’s shot-stopping was a big part of that.”

Ha, who played in goal at Niles West in the mid-1990s and helps run a local goalkeeping academy, said that other than height, the 5-foot-11 Adamopoulos has many of the tools one looks for in a keeper.

“He has the fundamentals I look at in terms of shot-stopping, reading the game and quickness,” Ha said. “He has a short memory. Nothing rattles him. He’s going to be a gift to someone in a collegiate program.”

Ha coached Adamopoulos on the freshman team two years ago, but said he was somewhat disappointed by the youngster’s progress as a varsity debutant in 2013.

He said Adamopoulos seemed shy about coming off his line.

Adamopoulos, meanwhile, admitted he was uncomfortable providing vocal leadership because he was a sophomore playing with mostly seniors.

But the offseason was a productive one for Adamopoulos.

He joined former GBS head coach and current assistant Paul Agombar at the Northfield-based FC United club team in the spring, where Adamopoulos served as the backup on the U18 team, two levels above his age-group.

Later, Adamopoulos trained at Ha’s academy and with Northwestern’s acclaimed Argentine goalkeeping coach Ovidio Felcaro, and he attended camps at the University of Chicago and Northwestern.

“Training with those (U18) kids helped a lot. I got better. Every single practice, they were just playing on a different level,” Adamopoulos said. “(Over the last year) I’d say I improved the most at reading the game, knowing when you should be aggressive and come out to grab the ball, and when you shouldn’t.”

This spring, Adamopoulos will play for FC United’s U17 team, which competes in the division that attracts the most college scouts. He aspires to play at the next level, and a 4.8 grade-point-average on a 4.0 scale certainly won’t deter suitors.

Older brother George, who now lives in New York and works in financial services for Deutsche Bank, said he once had an opportunity to play in college, but decided instead to concentrate on academics at the University of Michigan. George said his goalkeeping style was somewhat similar to Perry’s, though admitted his younger brother is better in certain areas of the game.

“(Perry) has better form, and he’s more fit athletically,” George said. “I had better footwork, but he’s better at diving (for the ball) and has better range. Perry definitely started training earlier than I did, and he’s had really good coaching. He’s gone to several (college-program sponsored) summer camps and quality showcases. He has more (college) prospects than I did.”

Another key advantage for Perry, of course, is that he came of age with another goalkeeper in the family, one who regularly offered advice and always was willing to head down into the basement to play ball.