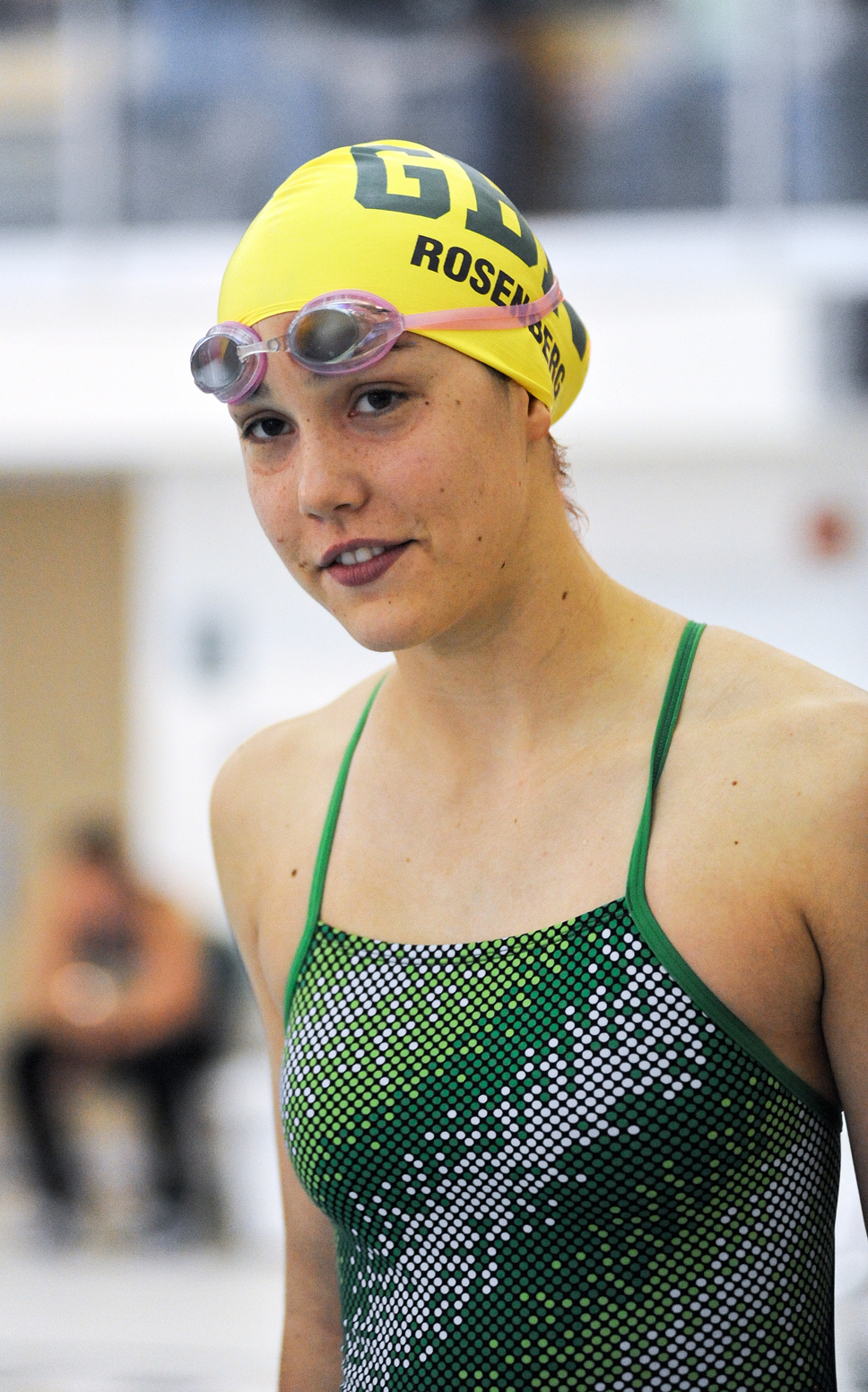 Abigail Rosenberg’s transition from club swimming to high school swimming was a turbulent one three years ago.

Now a Glenbrook North senior, she recalled her freshman season as a Spartan at the Niles North swimming and diving sectional Nov. 15.

So is Spartans swim coach Robin Walker, along with all of Rosenberg’s current teammates. The Bucknell-bound Rosenberg swam on three state-qualifying relays — including two victorious ones — at the sectional and earned another state berth by clocking a runner-up time of 51.98 in the 100-yard freestyle.

“Abigail struggled with the team atmosphere that comes with high school swimming,” Walker said. “Now, though, she embraces everything we’re doing, everything about the team. Our young swimmers flock to her because she’s a great leader and an ideal role model.

“I see her living in a neighborhood [after the Bucknell years] and being this woman who rallies the entire neighborhood. Nobody living near her will have to worry about a thing; she’ll take care of everything.”

The Spartans’ team theme for the sectional meet was, in essence, “Be misfits, be unafraid to express your individuality.” Walker insisted that his swimmers draw on their unique qualities — knowing that doing so would bolster the team at the same time.

“We don’t need copies; we need originals,” said the colorful and highly animated coach, a psychology teacher when he’s not firing up athletes in a natatorium. “Special things unite us, but I don’t want my swimmers to lose their individuality.”

Two Glenbrook North quartets chained together electric legs in Niles North’s new pool. Rosenberg served as the lead-off leg for the 200 and 400 free relays, helping the former record a time of 1:36.24 and the latter a 3:30.52.

Neither relay was seeded first at the sectional.

But the 400 free unit ranks third among all state qualifiers, and the 200 free crew sits fifth.

Glenbrook North placed fourth (161 points) at what many considered the most competitive sectional in the state. Loyola Academy (255), New Trier (219) and Evanston (171) finished 1-2-3.

Notable: Last month Walker had his Spartans bob for apples, an annual bonding event held in between racing for gold at meets and trick-or-treating. Walker, on Walker: “I’ve never been a textbook coach.” … Tufts-bound Oliphant finished 11th in the 100 breast (1:05.89) and 12th in the 200 IM (2:13.04) at the state meet last fall. … Glenbrook North freshman Natalie Horwitz finished sixth in the 200 free (1:57.16) from the penultimate heat at last weekend’s sectional, after entering the event with a seed time of 2:01.37. The top five finishers — with times ranging from 1:52.94 to 1:54.72 — advanced to state. The state cut in the event is 1:55.28. … Rosenberg ranks 11th among state qualifiers in the 100 free. … Glenbrook North (382 points) captured the Central Suburban League North swimming and diving meet at Niles North Nov. 8, behind three championship efforts, including two by Oliphant (200 IM, 100 breast). Oliphant also collaborated with Baxamusa, Doolan and Rosenberg to take first in the 200 medley relay. Spartans entrants finished second in five other events at the 12-event meet. Deerfield (314) finished runner-up. … Walker, after Rosenberg melted her seed time by more than a second in the 100 free; “She had her best walls [turns], and she closed the deal. Bucknell is getting a good one.”