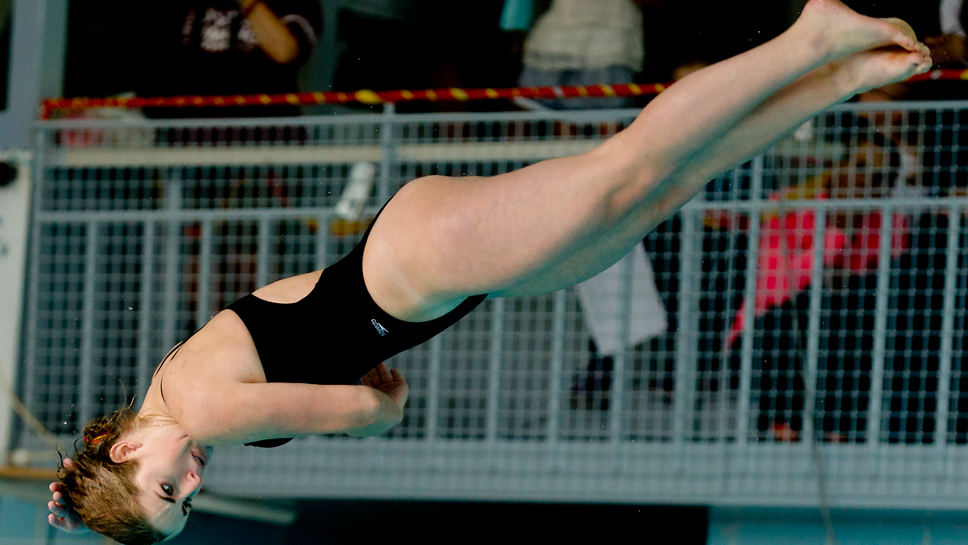 A wonderful reaction from the crowd of diving spectators filled the new natatorium at Niles North last weekend.

But it wasn’t applause.

It was the sound made by people moments before the same people started clapping at a sectional meet Nov. 15.

It was the collective sound of a throng uttering “Whoa” and another throng emitting “Wow.”

A fashionista dresses to the nines.

An elite diver strives for nines.

“She looked great,” Ramblers diving coach Tony D’Amico said. “Katie changed gears during her fifth or sixth dive. I could tell; it was easy to tell.

“She was aggressively fighting, less passive.”

The resplendent inward pike was Rourke’s sixth of 11 dives, and it swelled her total to 271.1 points — a smidge behind the leader at the time, New Trier junior Sophie Conley (272.5). Rourke then received two more 9s and three 8.5s for her reverse tuck on dive No. 7.

Momentum was all hers, a force the Glenview resident rode to a superb and sectional-winning total of 531.6 points; only three other state qualifiers eclipsed 500 points last weekend, with Naperville Central junior Sydney Dusel ranking second behind Rourke after amassing 518.55 points to win the Metea Valley Sectional in Aurora.

“When I’m confident I do better, plain and simple.”

Rourke last appeared at the state meet in 2011, when she placed 26th as a freshman. The Glenbrook Aquatics club member chose to not compete for LA the past two seasons.

“Katie,” D’Amico said, “is super strong. The thing is, you have to control that strength, and that’s something Katie does that quite well.”

Ramblers swimming coach Mike Hengelmann stood poolside after the meet, proud and pleased but not ecstatic.

“A lot of our girls were not fully rested for this meet,” said the 2000 Loyola Academy graduate. “Our focus now shifts to state. Right now it’s all about making a lot of noise on Friday (during the state preliminaries).”

The most poignant visual at last weekend’s sectional might have been LA sophomore Olivia Andrew releasing happy tears for senior teammate/car pool mate Sophia Funck after Funck qualified for state with a fifth-place time of 1:06.88 in the 100-yard breaststroke. Funck’s seed time in the event was 1:08.38.

“I was thrilled for her because she’d been working incredibly hard all season,” said Andrew, who qualified for state in the maximum four events for the second year in a row.

LA senior and University of Pennsylvania recruit Libby Jardeleza also left Niles North as a multiple state qualifier. The reigning state runner-up in the 100 backstroke touched second in that event (56.52) on Nov. 15, after winning the 100 butterfly in 56.74. She also served as the lead-off leg on the third-place 200 medley relay (1:47.7, with juniors Claire Voss and Maria Kyle and freshman Cassidy Coughlin).

Notable: Ramblers freshman Margaret Guanci did not qualify for state but received a sixth-place medal for her 2:11.53 in the 200 IM. … D’Amico was named Niles North Sectional diving coach of the year. … Christina Loukas’ famous name resurfaced at the Niles North Sectional after Rourke’s 531.6-point day. Loukas — the former star diver at Deerfield (’04) and two-time U.S. Olympian — won the 2003 state diving title with a meet-record 507.55-point total. She also topped the state diving fields in ’01 and ’02. Now 28, she finished eighth (3-meter springboard) at the 2008 Olympics in China and ninth in the same event at the 2012 Summer Games in London.