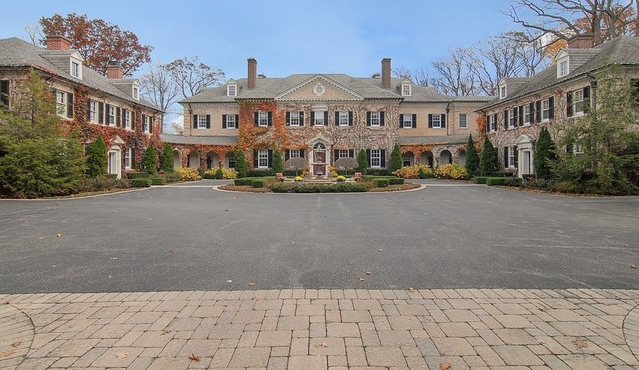 Highland Park native and singer/songwriter Richard Marx–known primarily for a slew of hits in the late-80s–has listed his 7-bedroom, David Adler-designed mansion in Lake Bluff for $18 million. The three-story Georgian-style mansion is set on five private acres of Lake Michigan frontage and has 11 bathrooms and 19 fireplaces, according to Redfin.com, which posted 25 photos of the property’s exterior, interior and lake views on its website. The property is listed by Andra O’Neill of @properties in Lake Forest.

Built in 1931 for the grandson of Chicago meatpacker Phillip Armour, the house was featured in Robert Altman’s movie “A Wedding.” This article from the Tribune archives states the home sold in 1984 “in the $1 million dollar range.”

Marx and actress Cyntha Rhodes married in 1989 and moved to Lake Bluff, where they raised three sons. They bought the mansion in 1997 through for $4.7 million, according to the Tribune. Last spring, People magazine reported that the couple was getting a divorce.

The current $18 million asking price makes it the fourth-highest of any Chicago-area residence, according to an article in the Nov. 20 Chicago Tribune.

Marx was named a “Local Legend” in 2013 by the Lake Forest-Lake Bluff Historical Society. In an interview with Forest & Bluff magazine, Marx’s friend, Chicago radio personality Roe Conn, talked about Marx’s decision to settle in Chicago and Lake Bluff.

“Richard made a pretty bold statement when he chose to live in Chicago over Los Angeles or Nashville, cities that are closer to the music business. The mechanics of the music business are harder here—things aren’t as convenient. But Richard wanted to raise his kids here. There’s a sensibility to Chicago. Chicago is smart and sophisticated and worldly in its own way. And there’s something about the sensibility and sense of humor of this marketplace that allows us to see through some of the vanities and conceits and plain goofiness of other places. In Chicago, if a guy starts to get too many airs about him—believe me—he’ll hear about it. Chicago has a very self-correcting environment for ego and people who take themselves too seriously. The beautiful thing about Richard is that he’s neither. He’s thoroughly set to live in an environment like this.”

His house [in Lake Bluff] is pretty spectacular. There’s nothing more beautiful than late fall up there. You have this incredible inland ocean. I remember once walking with him on his property and looking out and thinking—you couldn’t even get this view in California! Malibu isn’t even as striking or dramatic. And I know he likes Bluffington’s—we’ve been there a few times. It’s great!