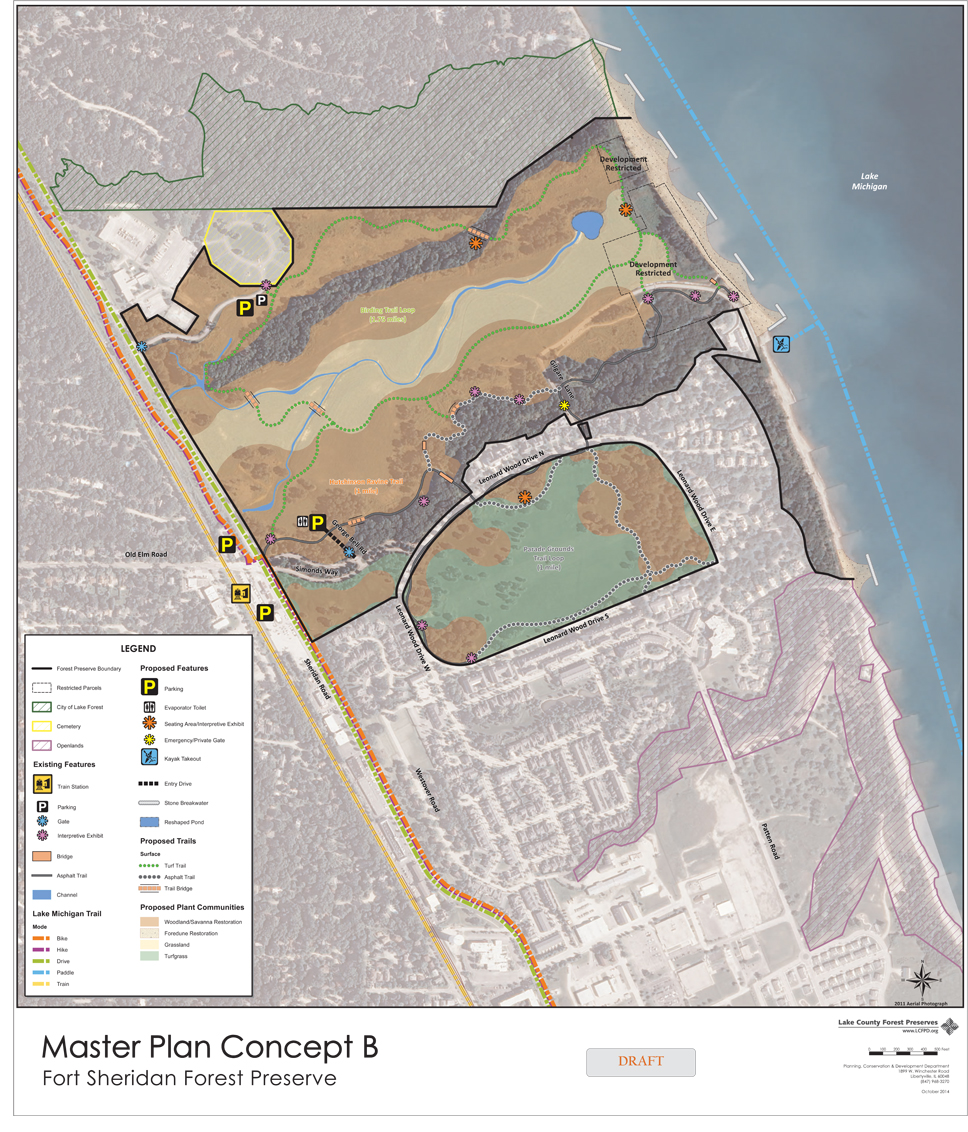 This is the 2nd of three Concept Plans for the Fort Sheridan Preserve.

The Lake County Forest Preserve District Board of Commissioners recently introduced three Master Plan concepts for its 250-acre Fort Sheridan Preserve that could potentially add seating areas, thousands of trees, reconfigured parking areas, minimized grassland areas and even kayaking access to Lake Michigan — or some combination of the above.

The three concept drawings are based on information collected at a community Open House that took place two and a half years ago as well as more recent conversations with the cities of Lake Forest and Highland Park, the Town of Fort Sheridan subdivision and Open Lands, which all border the preserve, according to Lake County Forest Preserve Executive Director Ty Kovach.

But at least one local resident is crying foul that the public has not been more involved in the planning. Sonny Cohen, a longtime advocate for Fort Sheridan Preserve, said he has issues with the concept plans but that his greater concern is that they were developed without current public input and released without any public notification. (The concept drawings were shown publicly for the first time at a LCFPD Planning & Restoration meeting that took place at 1:30 p.m. on Nov. 3. The agenda for the meeting lists the presentation of the plans in one line under “Old Business” as “Presentation of Fort Sheridan Master Plan alternatives.”) 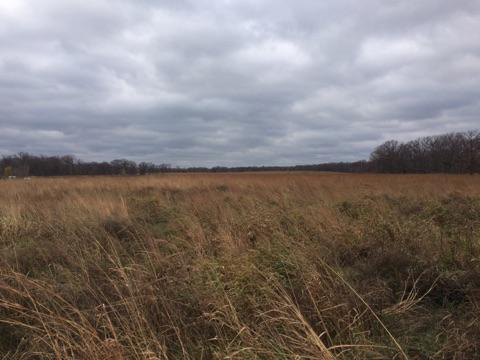 “I think a broad-based input of interested people who use and value the preserve is essential to providing what people want from this preserve,” said Cohen, who is a birder and member of Lake Cook Audubon but is speaking only for himself in regards to the Concept Drawings. “I have my own opinions. But I don’t necessarily want to be the spokesperson for others – because we don’t know what they think. Let’s find out.”

“The plans serve as a starting point in the master planning process for the future of Fort Sheridan,” she said. “They were developed after reviewing the public’s feedback from the Open House that was conducted approximately 2 1/2 years ago.”

Both Hart and Kovach said the next step is for Forest Preserve staff to research the potential cost implications of the plans, including mowed trail vs. gravel, comfort stations, and the possibility of sharing services such as parking with the neighboring partners. They said the plans indicate relocating parking areas but do not call for additional parking spaces. There are currently 80 spaces, up from just a few when the Forest Preserve District took ownership of the Preserve.

Said Hart: “The declining EAV in Lake County has significantly impacted the Forest Preserve’s revenues (along with the revenues of other government agencies). To that end, we need to be very cautious about what amenities are added to any of our preserves.”

“We took some time to sit back and see — before we invest money — lets have a clear strategy. There was a lot that we had to work with the Army Corps on, such as restricted areas. The Army conducted artillery practice on the hill site, and we had to find out if we could actually do anything there. It took 10 months for the Army to get back to us. And they said no. They said if you dig deep, there is potential for ordnances (aka unexploded weaponry) to still be underneath. So in those areas of the preserve, we’re not allowed to do deep excavation.”

Likewise with swimming in the lake. Because of the unexploded ordinances that may still be off shore in Lake Michigan, swimming has long been prohibited at Fort Sheridan Preserve, and that is not going to change. Why then do the Concept Plans offer the possibility of kayaking access, if being in the water is potentially hazardous? Hart and Kovach said kayaking was something that people said they wanted during the 2011 Open House.

“It doesn’t mean we can do it,” Kovach said. “We have to work with the Army Corps of Engineers. Can we even afford to do it? That’s a big if. But we need to look at it, to see what is possible and what dollars are associated.”

When asked to summarize the Concept Drawings, Kovach wrote the following in an email:

“We are aligning the concepts to our mission and budgetary restraints. We are trying to protect the land while providing access for the purpose of recreation and education,” he said.