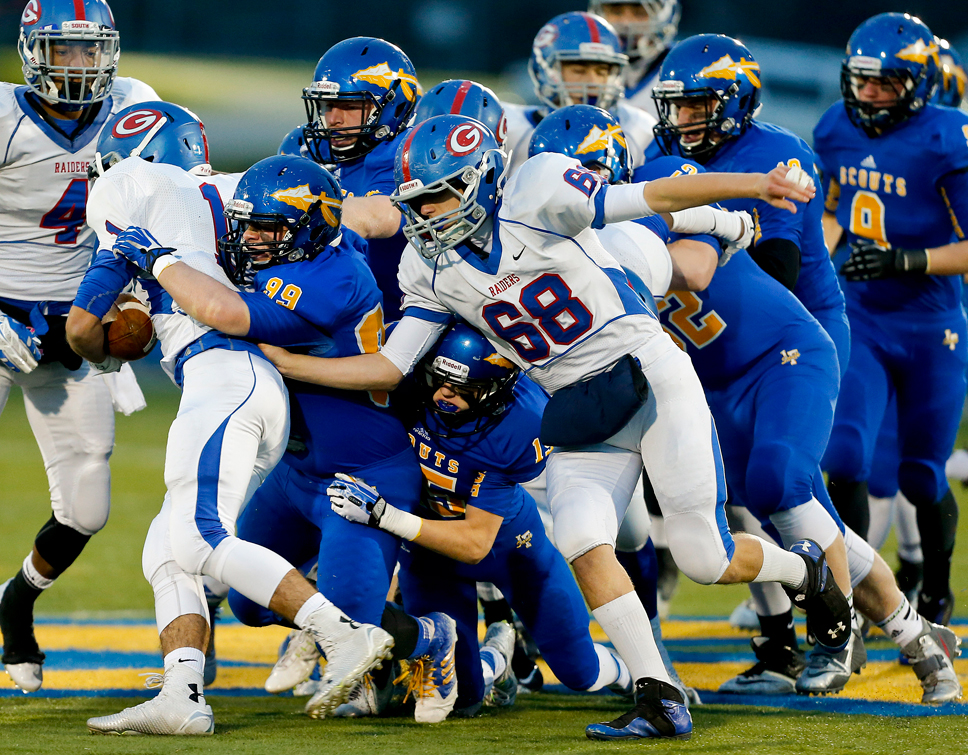 At 5-foot-6, 210 pounds, it’s easy for this undersized senior nose guard to blend into the scenery. He doesn’t create a lot of fanfare or bring a lot of attention to himself.

Athenson, one of the rare two-year starters on defense for the Scouts, simply is good with just getting the job done.
Fair warning: you take him lightly — and he’s gotcha.

“I’m the short guy out there,” Athenson said. “They underestimate me. And I use that for motivation. I make up for my lack of size with drive and passion.”

“He doesn’t do anything spectacular out there, but he does everything right,” added Lake Forest head coach Chuck Spagnoli.
See the parallel?

Like Athenson, the Scouts, who have been underappreciated for most of the season, have come on like gangbusters in the Class 6A state playoffs. Seeded No. 13, they shocked No. 4 Belvidere North 42-21 in the opening round and then overcame a 14-0 first-quarter deficit to stun No. 5 Glenbard South 42-28 at Varsity Field on Nov. 8.

No doubt, these undaunted Scouts (8-3) will be huge underdogs when they meet host Nazareth Academy (11-0) in the quarterfinals — LF’s third straight Elite Eight appearance — on Nov. 15 at 1 p.m. The LaGrange Park school, which took first in the East Suburban Catholic and has a high-powered offense, averaging 45.5 points per game.

“We’re right where we hoped we would be,” said Spagnoli. “But the deeper you go in the playoffs, the harder it gets.”
As usual, No. 34 — senior inside linebacker Jack Traynor — and No. 24 — senior running back Wes Janeck — carried the day for the Scouts in their win over Glenbard South.

The highly touted Traynor finished with 12 tackles, including one for a loss, and made an interception.
Traynor nearly had two INTs. But he dropped what could have been a pick-6 late in the first quarter.

He was … not happy about that.

“Jack is the rock of our defense,” said Athenson. “He always wants to come out on top.”

“He’s a competitive guy, who’s never ever out of position,” added Spagnoli.

The same is true of Janeck. He was a runaway locomotive against the 8-3 Raiders, winners of the Metro Suburban West conference. The 5-10, 191-pound speedster carried the ball 18 times for 151 yards. Following the blocks of Thomas Kennedy, Jack Boyd, John McArthur, William Conover and George Kohl, he had TD runs of 1, 49 and 54 yards.

“He put the game away for us,” said Athenson.

Janeck’s numbers could have been off the charts. He had two TD runs (84 and 6 yards) nullified by penalties.

The block of the night belonged to senior wide receiver Michael Christensen. He erased a would-be tackler along the perimeter which sprung Janeck on his 49-yard TD run with 2:25 left in the first quarter, cutting Glenbard South’s 14-point lead in half.

Christensen (3 receptions, 32 yards) also had one of the top catches of the night, when he leaped high and snagged a perfectly placed 9-yard TD pass from quarterback Danny Carollo (8-for-23, 169 yards) with 9:44 left in regulation.

Fellow wide-out Mateo Hargitt was the other offensive star for the Scouts. He followed up a 3-catch, 60-yard game against Belvidere North with a 3-catch, 117-yard performance.

Hargitt’s first TD catch in the second quarter was a thing of beauty, when he ran under a Carollo pass and raced 54 yards into the end zone. Eight minutes later, he hauled in a wide-open 20-yard TD reception after Carollo successfully avoided a quarterback sack.

The game didn’t start out very promising for the Scouts. They trailed 14-0 with 4:16 left in the opening quarter.
“That first quarter,” said Spagnoli, who is in his 12th season with the Scouts, “was poorly coached by me. I got too smart for my own good with that fake punt (which led to Glenbard South’s second TD).

“When you screw up as a coach, you can only hope that your kids bail you out,” Spagnoli said. “Our kids did. We were able to straighten things out.”

A couple of three-and-outs did wonders for the Scouts.

“We just had to toughen up our defense,” said Athenson, who finished with four tackles. “We weren’t worried at all. They were doing some frivolous stuff on offense. Running jets, spreading things out. We just had to stay true to our defense.
“We’ve been through the fire,” added Athenson, a versatile musician who plays piano, trumpet and tuba. “We play in one of the hardest conferences in the state (Stevenson and Libertyville are still alive in the state playoffs). Losing some of those earlier games is helping us now.”

Notable: Spagnoli and his staff like to use the whole roster. Nineteen different players saw meaningful minutes on defense in this win. Sophomore outside linebacker Cal Wonham and junior safety Jonathan DiValerio finished the game with eight and seven tackles, respectively. Junior outside linebacker Francis Nicholson came up with a forced fumble and quarterback sack. The other sacks belonged to Wonham (two), Jaxon Mills, Trevor Morcott, Parker Ferris and Charles Yale. … Running back Quinn Julian had another solid game (6 rushes, 75 yards). His 32-yard gain at the start of the third quarter led to Janeck’s 1-yard TD run.