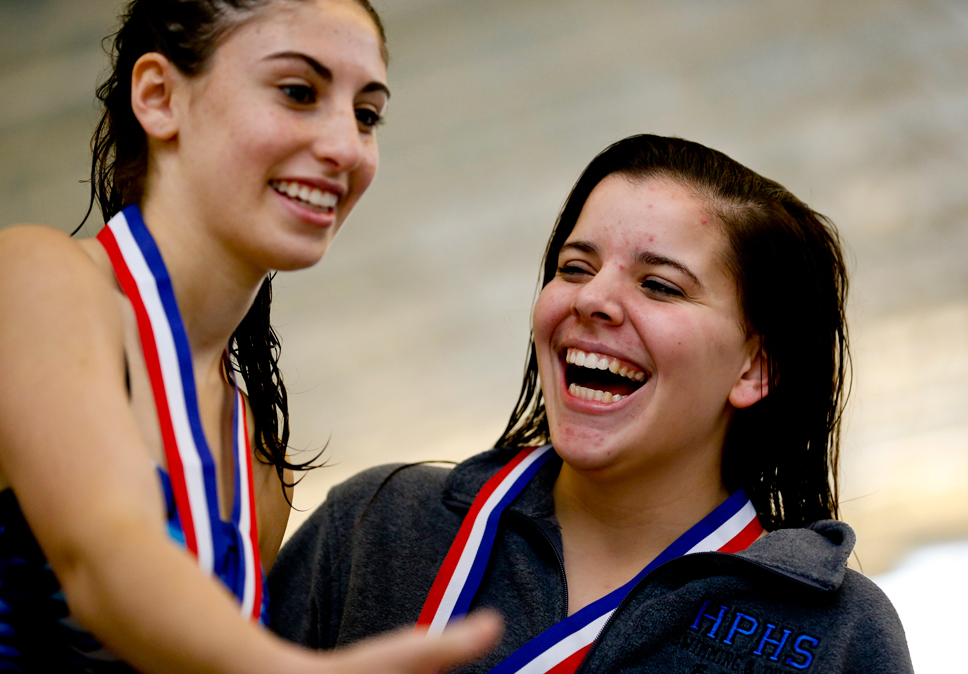 When Erin Cullather was five years old and living in Virginia, she wanted to dive off boards and pierce water.

She asked her parents, Kevin and Chrysa, for permission.

They didn’t hesitate — to deny her.

Their daughter hadn’t taken one swimming lesson before the request.

More than a decade later, Cullather — now a senior at Highland Park High School — is diving and resurfacing safely and regularly. She finished runner-up at the Central Suburban League North swimming and diving meet at Niles North Nov. 8, earning a personal-best 397.55 points.

She had set her previous high mark of 359 at the Glenbrook South Invite Oct. 25.

“We worked together as a team,” Cullather said, nodding to the value of support from Giants divers Avery Spitz and Kendall Robbins during the meet. “We kept each other up between our dives … and even the Deerfield divers rooted for us.

“It was a good atmosphere [behind the boards],” she added.

A University of New Hampshire recruit and the sister of Rensselaer Polytechnic Institute (N.Y.) junior diver Maggie Cullather (HPHS, ’12), Erin enhanced her diving techniques significantly in the offseason with the help of Glenbrook Aquatics coaches. She added a reverse-one-and-a-half to her list.

“Always solid, too, especially with the little things,” he added. “She stands up her jumps, kicks out tight … things like that. We stress fundamentals a lot, do a ton of basics.”

Cullather threw steady dive after steady dive at the CSL North meet, staying with eventual champion Lindsay Guare (403.15 points) of Deerfield for the bulk of the 11-dive test. Not much separated the two after eight dives, with Guare holding a 292.75-292.05 edge.

“Erin has perfect form and is very consistent,” said Spitz, who placed third with a personal-best score of 363.65. “She’s been diving for so long, and she understands it so well. And she’s fun in practice; if she makes a mistake, she’ll get right back up on the board with a laugh.”

HP’s divers and swimmers practice separately, thus making it difficult for the two sets of athletes to bond between meets. But Cullather, a captain, makes sure the groups stick together.

“Erin bridges the gap between our swimmers and the divers,” HP swimming coach AJ Block said. “You want that from a captain.”

Like her older sister, Erin Cullather put her swimming lessons to good use for the good of the Giants. She swam the butterfly as a freshman and competed as a member of a relay unit this fall.

Maggie Cullather swam a leg for HP’s 200 freestyle relay at a sectional meet.

“Maggie and I … we’re kind of different, kind of similar,” Erin said.

Erin Cullather had no problem assimilating to life at HPHS as a freshman — thanks to what the Giants’ swimming and diving program provided.

“An automatic group of friends,” she said.

Three years later, Cullather’s friends/teammates are still grateful she landed cleanly (little or no splash) in the Land of Lincoln after living in Virginia as an eager diver-wannabe.

“Erin is super nice, super bubbly,” Roby said. “Her attitude … it’s always great. Her personality is a contagious one; it’s like a magnet to her teammates.”

HP returns to Niles North to vie for state berths at a sectional Nov. 15.

Notable: HP finished third (290 points) behind Deerfield (314) and champion Glenbrook North (382) at the CSL North meet last weekend. Two other Giants entries joined Cullather as collectors of silver. The 200 medley relay team of sophomores Julia Solem and Caroline Kane, junior Sam Lask and freshman anchor Ari Cole took runner-up honors with a time of 1:55.2. Solem later touched second in the 100 backstroke (1:02.27). Lask contributed third-place points in the 100 breaststroke (1:11.13), and HP junior Natalie Gelberg finished third in the 500 free (5:35.08). … Every member of HP’s crew achieved a personal-best effort at the CSL North JV swimming and diving meet on Oct. 7. Freshman Hannah Wander won the 100 breast in 1:14.2 after entering the meet with a seed time of 1:17. She missed the JV meet record in the event by six-tenths of a second. Freshman JV diver Aliana Velick took second with a point total of 301.45. … Seeing double, a lot: Four sets of twins compete for HP’s swimming and diving program this fall. … Roby competed for the University of Minnesota’s swimming and diving team for one season. As a 20-year-old, he finished 19th in the 3-meter segment (senior division) at the USA Diving Championships.