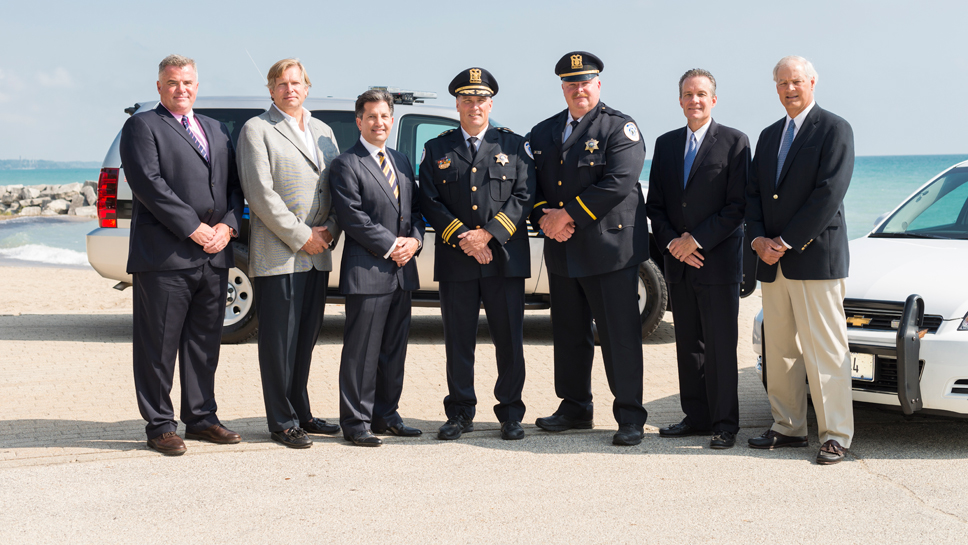 Residents from Winnetka piled into squad cars and fire trucks, infiltrated the village’s 911 communications center and outnumbered the uniformed protectors of the community last month.

But anarchy hadn’t run rampant on the North Shore.

“The event was well-attended,” Commander Marc Hornstein of the Winnetka Police Department says. “It always is. People want to know about the departments’ equipment. People enjoy seeing equipment demonstrations.

“The village,” he adds, “has always been very responsive to our need to make sure our equipment is up-to-date.”
City of Lake Forest defibrillators reached the awkward age of 13 this year. That’s a precarious age for a class of vital devices — too precarious for Lake Forest resident and Lake Forest Citizen Police Academy graduate Terry Rozdolsky and others who had heard what the formation of a local foundation could do for a police department that earmarks most of its budget for salaries and benefits.

“Commander Robert Copeland [of the Lake Forest Police Department] attended a seminar on how to set up such a foundation and told me about it,” Rozdolsky recalls. “It had been talked about for a year in our community.

“I was interested because I gained new respect and appreciation for what police officers do through the Citizen Police Academy.”

“If a new defibrillator saves one life in Lake Forest, it would be worth it … well worth it,” Rozdolsky says. “The foundation also brought back the police department’s self-defense course that had been cut from the budget years ago.”

But there’s more to the Lake Forest Police Foundation than its mission to supplement the police department’s budget and save lives. It will bring the police force closer to the city’s residents.

“Most of Lake Forest’s police officers don’t live in Lake Forest, and I can think of only one firefighter who lives in Lake Forest,” Rozdolsky says. “I’m confident a foundation like ours is an ideal way to help our officers connect better with the citizens because of the increased community involvement.”

Highland Park is a city without a police foundation like Lake Forest’s. But it benefits from police benevolent causes — as do other cities and villages on the North Shore — and it boasts a Community Emergency Rescue Team (CERT), comprised of between 60-80 volunteers who assist salaried officials during disasters and parades.

Highland Park Deputy Chief George Pfutzenreuter says. “Our police canine funds come from a charitable organization. We sometimes seek 50/50 grants — a grant like that has helped us purchase bulletproof vests.

“We assess the needs of our police department each year and budget for those needs.”

It’s paramount that police departments adopt a forward-thinking stance when it comes to budgeting for technology in their squad cars and buildings. Newfangled gadgetry at the consumer level these days, it seems, becomes obsolete quickly.

“It’s important to look two, three, four years down the road, when equipment will have to be replaced,” Hornstein, the Winnetka commander, says. “Equipment has a life cycle; you maintain your department’s technology through strategic planning.”

“We’ve been overwhelmed with the positive response to the foundation, along with the tremendous support from many people,” Rozdolsky says, adding the foundation will stage its first fundraiser either next spring or summer. “It took the right people to come together and get this thing launched, and we’re grateful it’s doing as well as it is.”